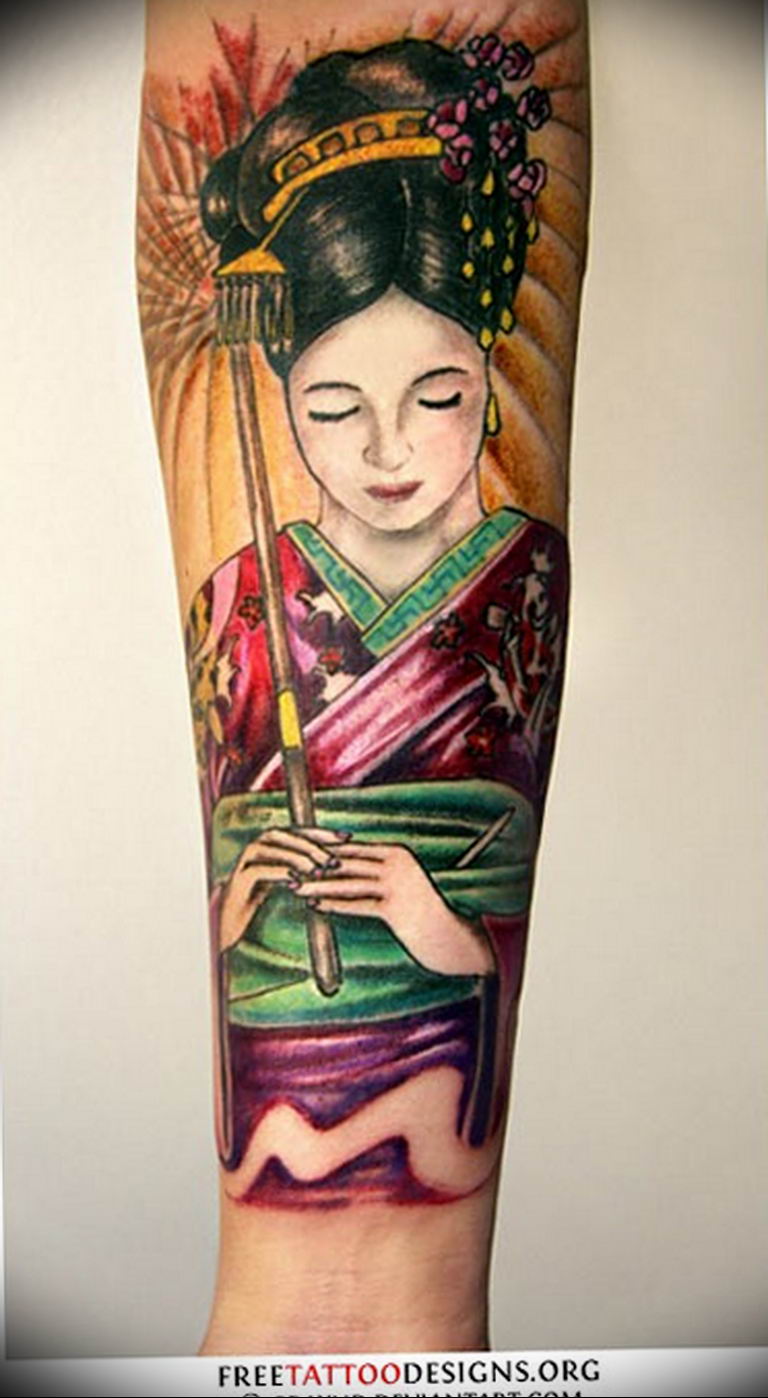 Whether you’re a fan of the Japanese culture or not, the geisha tattoo is one design that you might want to consider for your first or next tattoo. But before you give it a go, there are some things you might want to know about this beautiful tattoo. Read on if you want to learn more.

What is a Geisha Anyway?

Aside from being one of the popular Japanese tattoos, geishas are actually female Japanese entertainers. And contrary to what some people believe, they are not prostitutes. Rather, they are women with refined talents in singing, dancing, classical music, and conversation. They can be good at poetry, art, games, and calligraphy too, which they mainly use to entertain men. Their skills play a big role at cultural events and tea ceremonies too.

Getting to Know Geisha Tattoo

For starters, geisha tattoos are tattoos that depict a Japanese woman wrapped in a vibrant and colorful kimono. She has a slender built and wears white makeup and a black wig. Most of the times she is also depicted holding a fan. And if you’re going to look at it, it’s really an aesthetically pleasing tattoo. However, this tattoo is more than what means the eye. Let’s take a look at what this tattoo represents.

Meaning of Geisha as Tattoo

When it comes to body art, geishas are used to symbolize beauty and mystery. They also represent feminine power. Aside from that, when used as a tattoo, geishas can also represent one’s dreams, ambitions, desires, and aspirations. In fact, a geisha is also referred to as the “figment of the imagination.”

It might not look like one but geisha tattoos are actually very versatile. You can wear it with different symbols, particularly those that are related to the Japanese culture and can even be worn by people of all genders. Here are some ideas on how you can own your geisha tattoos even more.

Geisha and samurai are two of the most well-known symbols in Japanese culture. And when you combine these two for your tattoo, you can get an even more powerful representation of who you are through such body art. There are a few variations of this design, though. Sometimes, people opt for geisha tattoos paired with an image of a samurai. Sometimes, they ink a geisha holding a sword instead, looking like a warrior. Here are some ideas on how you can combine these two symbols.

A geisha holding a sword 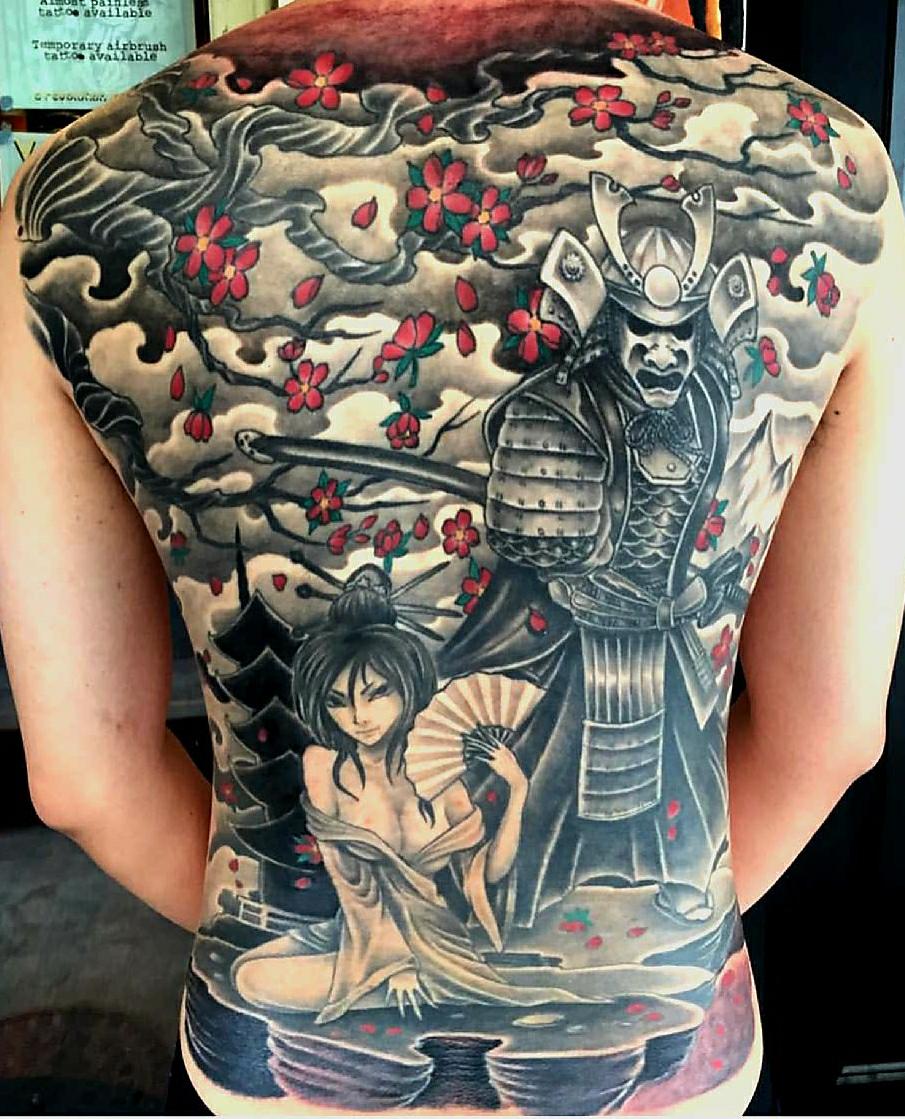 A geisha paired with a samurai tattoo

A geisha dressed in a samurai’s armor 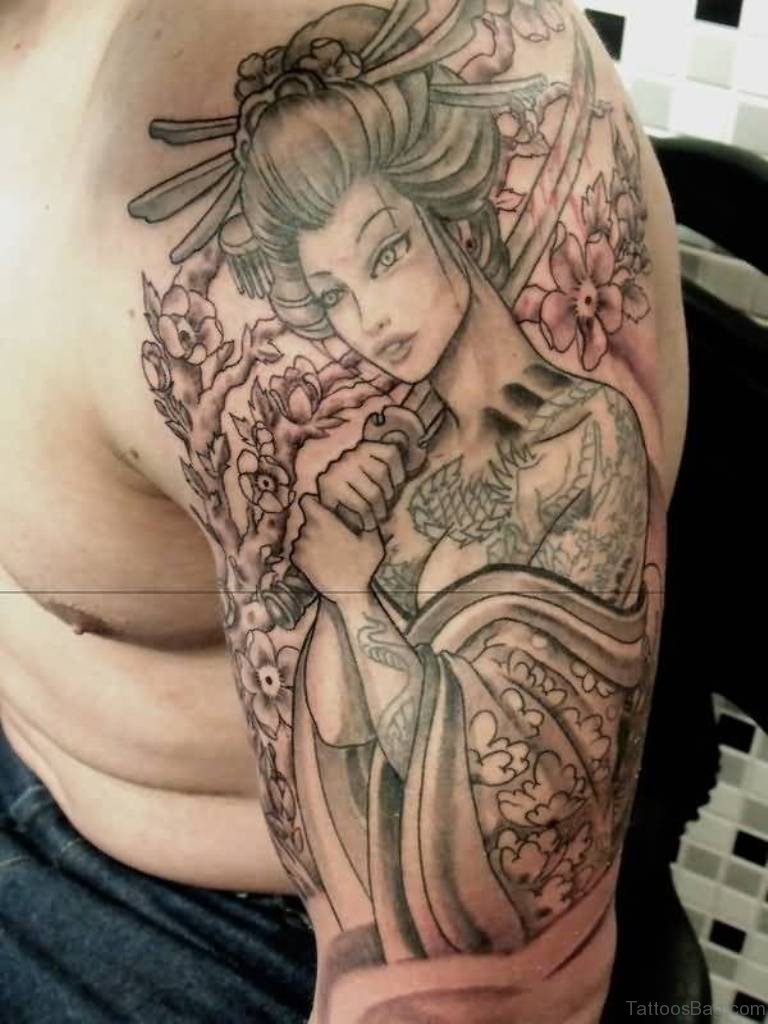 Another geisha holding a sword

A realistic sleeve tattoo of a geisha and a samurai

Cherry blossom tattoo designs are best paired with geisha tattoos too. Aside from the fact that it can make your tattoo look more dramatic and feminine, it can also represent youth, beauty, and how fragile life can be. Here are some samples on how you can pair your cherry blossom tattoo with a geisha design. 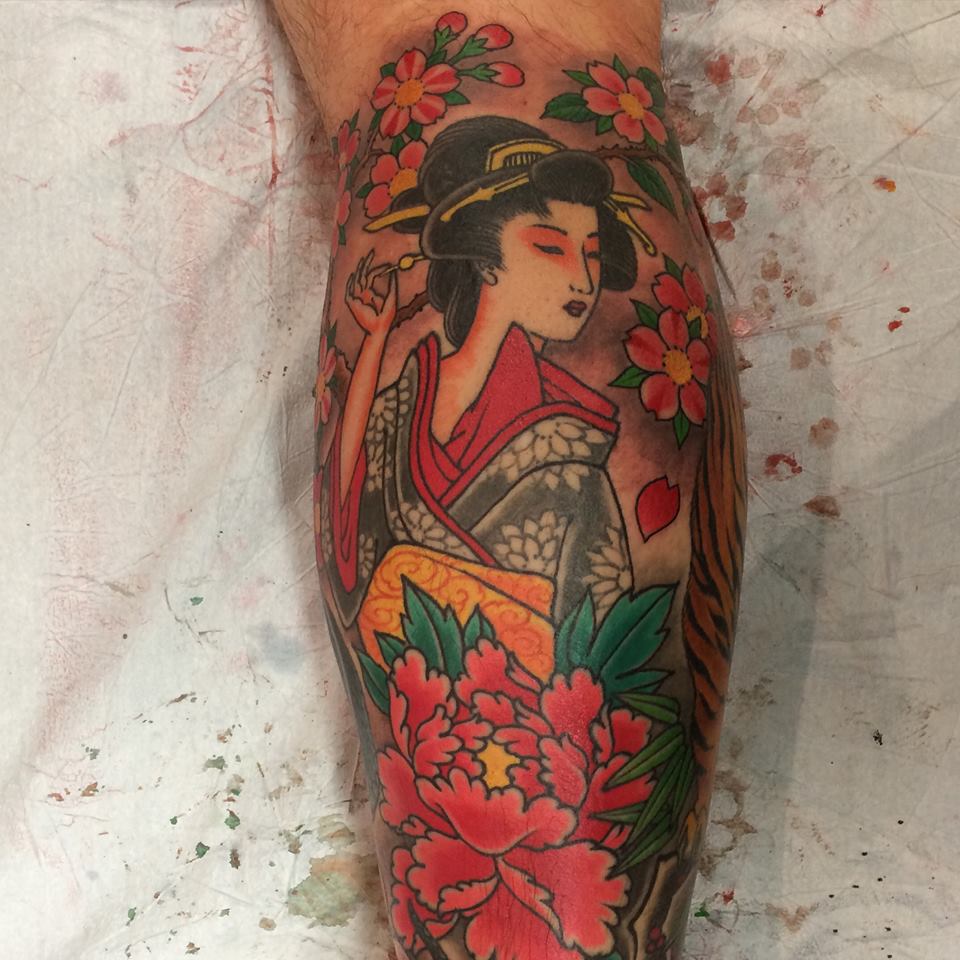 A classic tattoo of a geisha surrounded by cherry blossoms A geisha paired with a demon and cherry blossom tattoo A geisha sitting under a cherry blossom tree

A geisha adorned with cherry blossoms 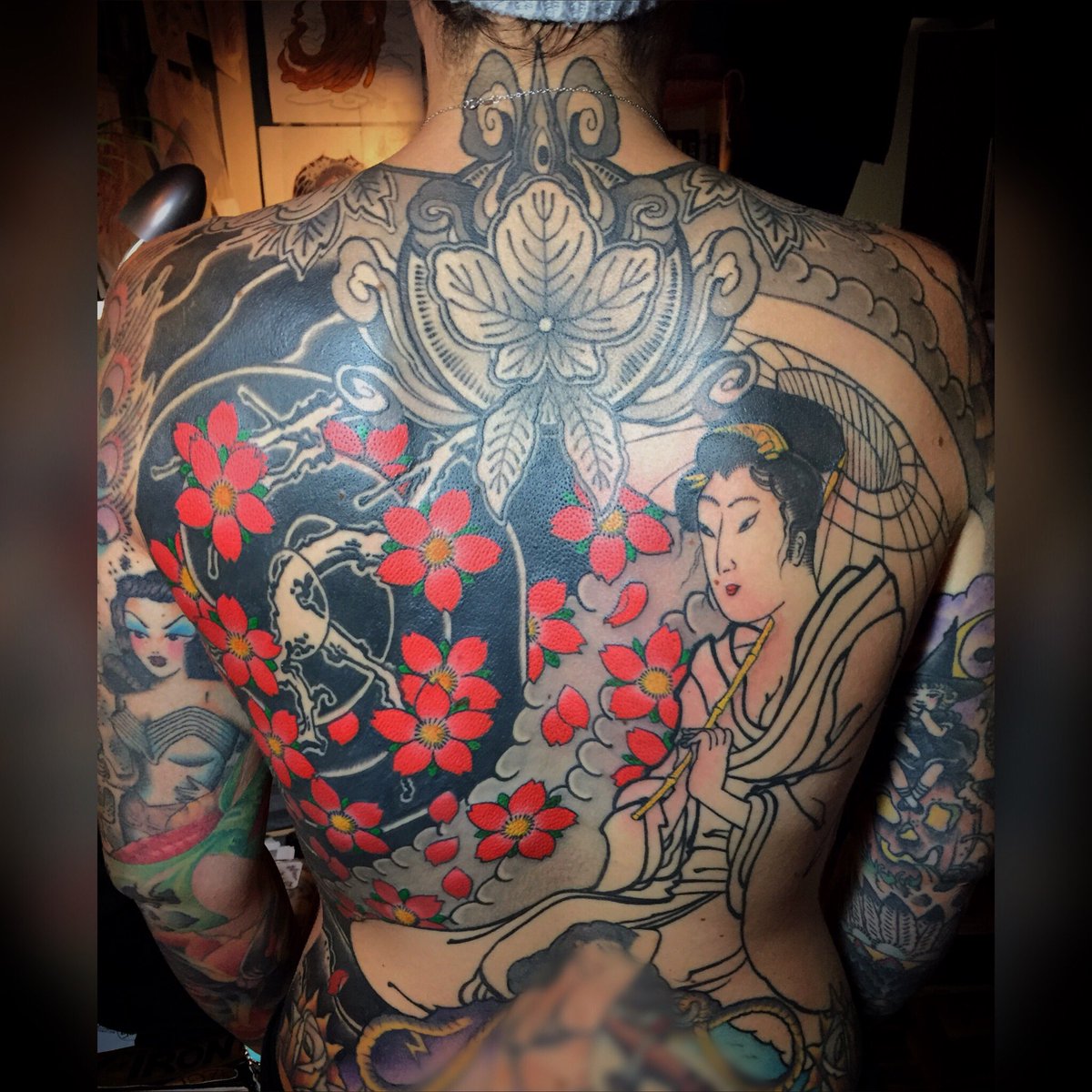 Umbrella tattoos also make a nice addition to geisha tattoos. It will make any geisha tattoo look more feminine. But aside from that, it can also make it more meaningful. Apparently, an umbrella tattoo symbolizes protection. Shelter, and shade. It also represents strength and resilience. Here are some ideas on how you can incorporate this design into your geisha tattoos. An elegant geisha holding an umbrella 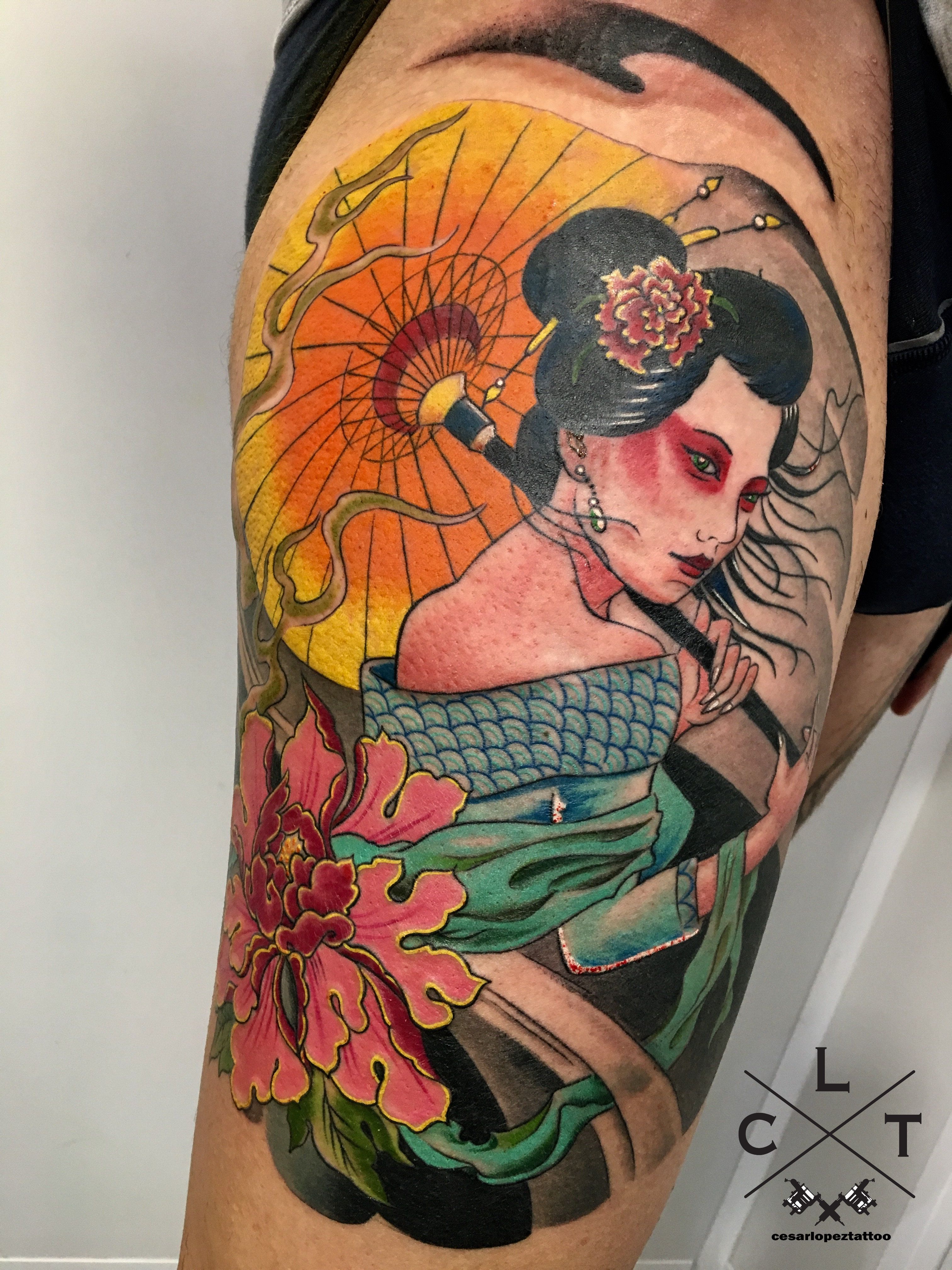 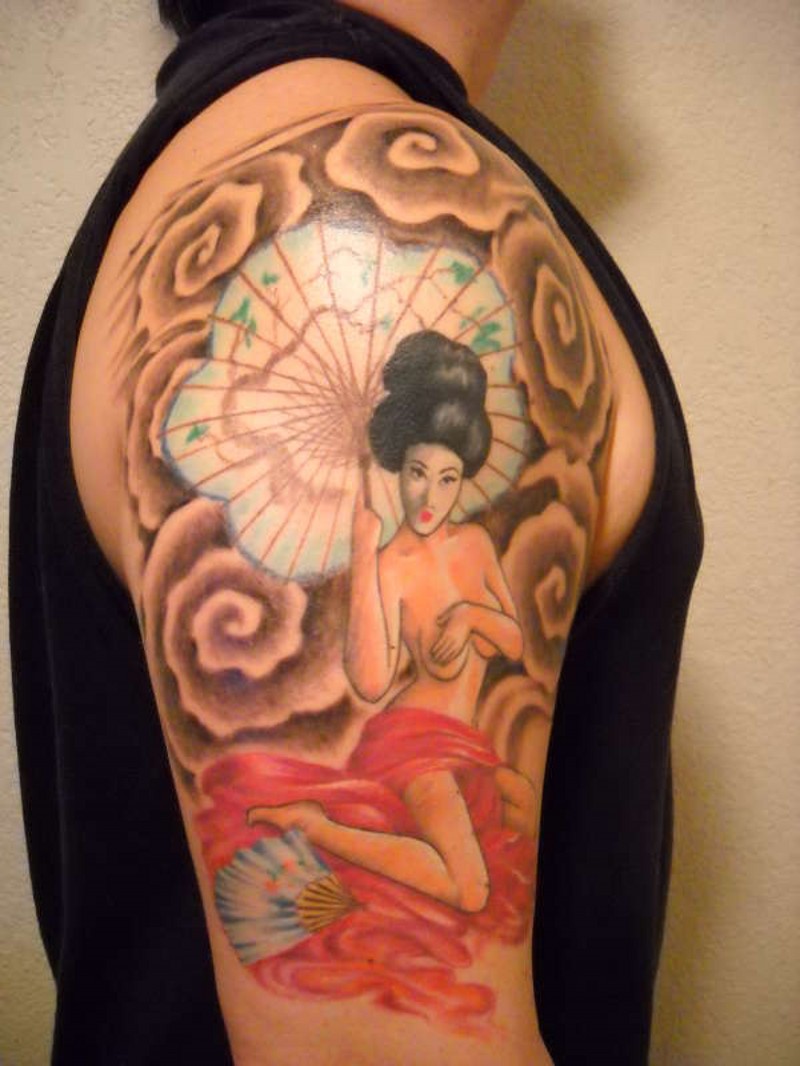 Fan tattoos also look good when paired with geisha tattoos. Like umbrellas, folding fans can also make geisha tattoos look more aesthetically pleasing. But aside from that, it can also add mystery to your tattoo. Moreover, it symbolizes good luck, generosity, and prosperity. It also represents royalty, gracefulness, charm, femininity, and intense emotion. Here are some ideas on how you can make your geisha tattoos look even more gorgeous by just adding a fan. 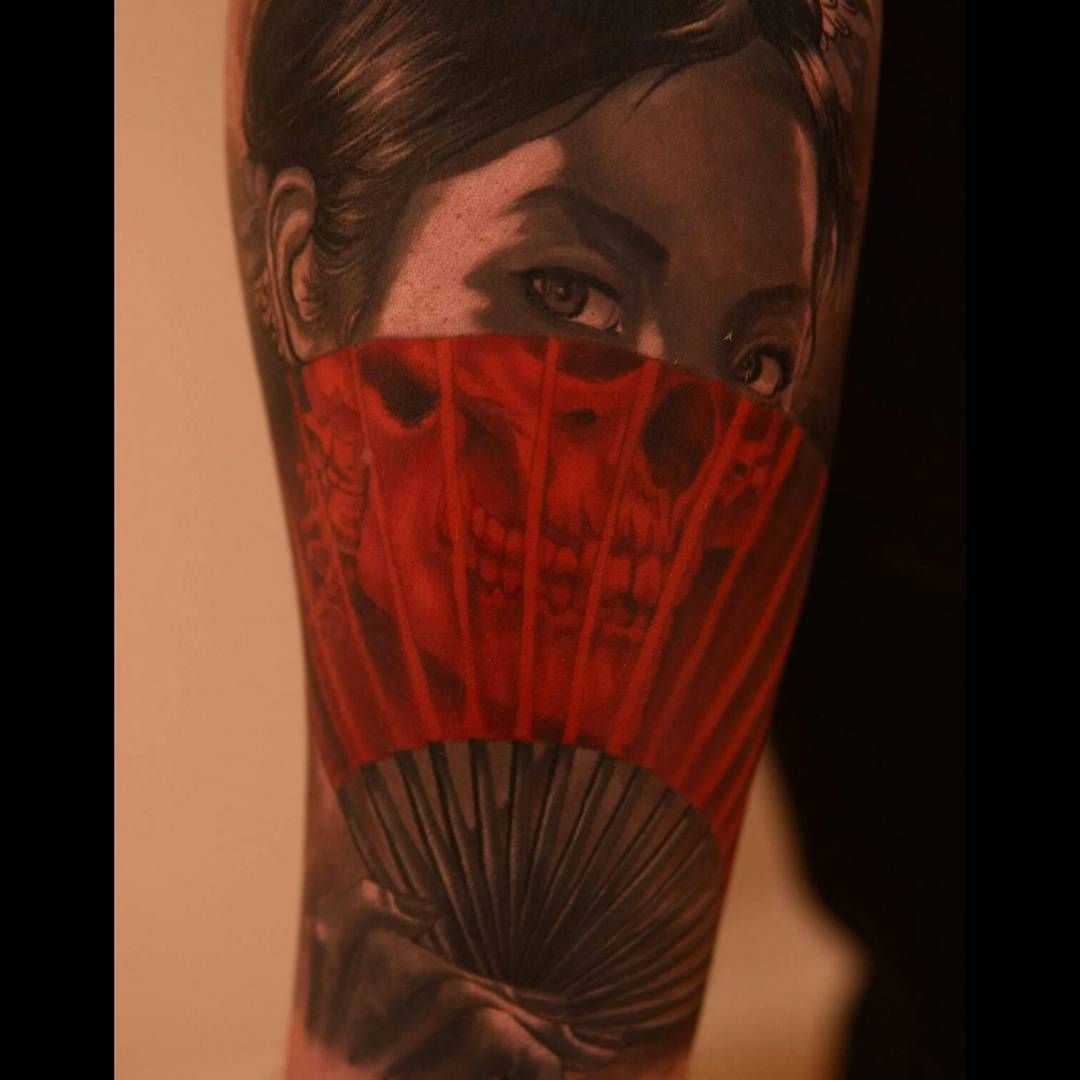 A realistic tattoo of a mysterious geisha holding a red fan

Another mysterious geisha holding a fan designed with cherry blossoms 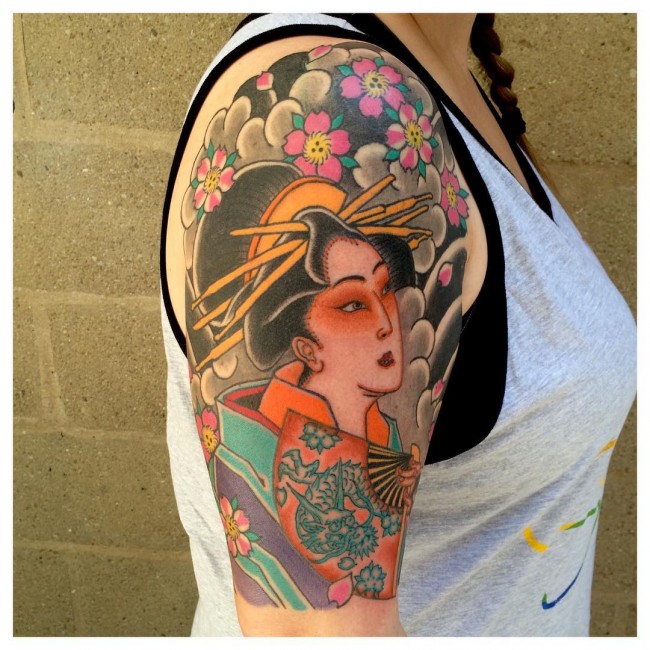 Dragons, on the other hand, can make geisha tattoos look less feminine. It can also make it more powerful and fierce because of the meaning that it carries. Thus, it is also something that you should consider adding to geisha tattoos. Here are some ideas on how you can combine these two symbols. 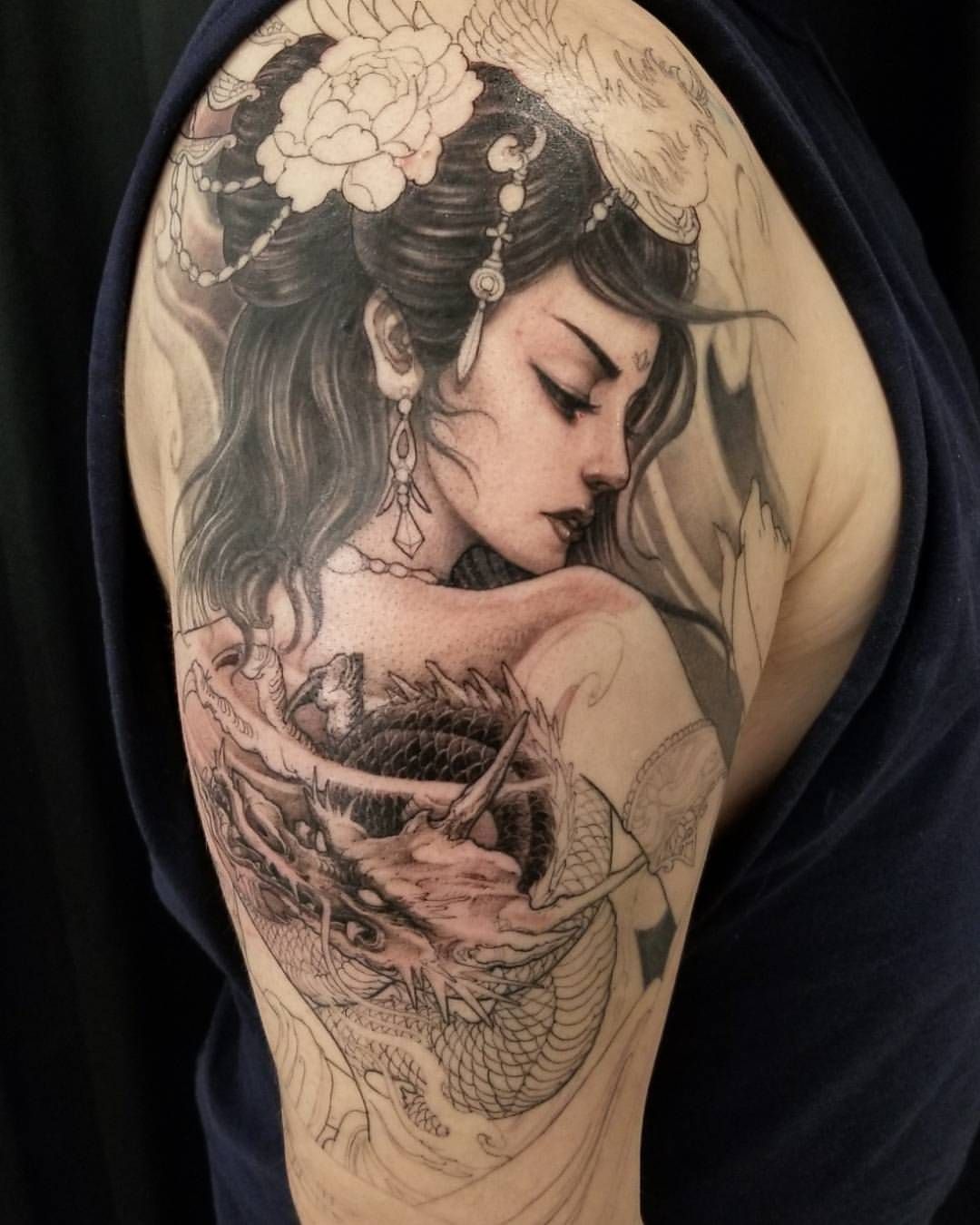 A half sleeve tattoo of a dragon-tattooed geisha 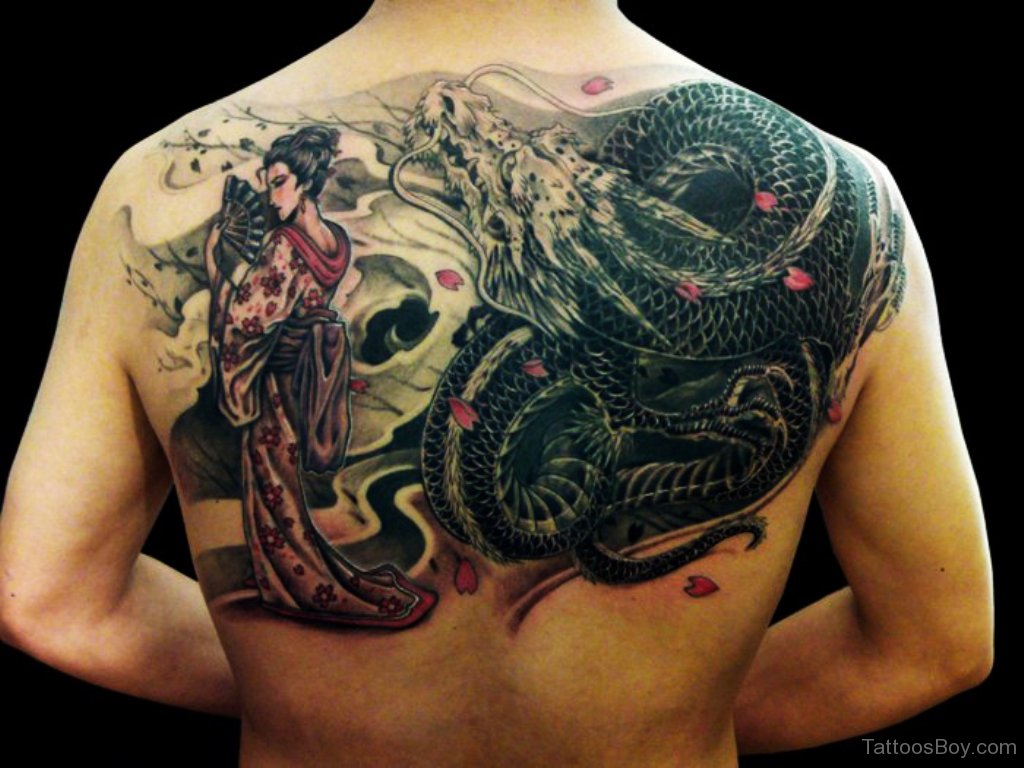 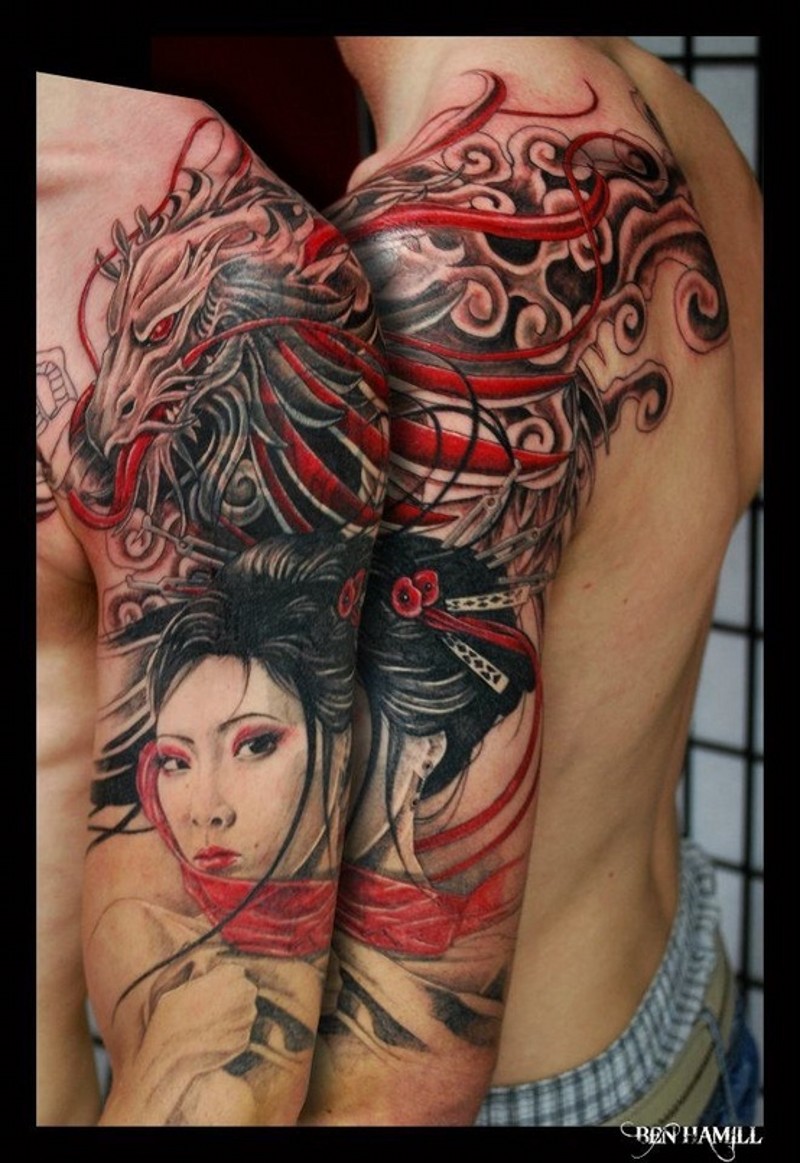 A unique black ink tattoo of a geisha riding a dragon

Tigers are also one of the popular tattoo symbols that makes every tattoo even more powerful. If you were to add this to your geisha tattoo, this can represent your independent, strong, and free-spirited character. It can help make geisha tattoos less feminine too if you want something that’s not too girly. Here are some samples on how you can match it with geisha tattoos. A full sleeve classic tattoo of a geisha with a tiger

A bicep tattoo of a geisha and tiger’s head 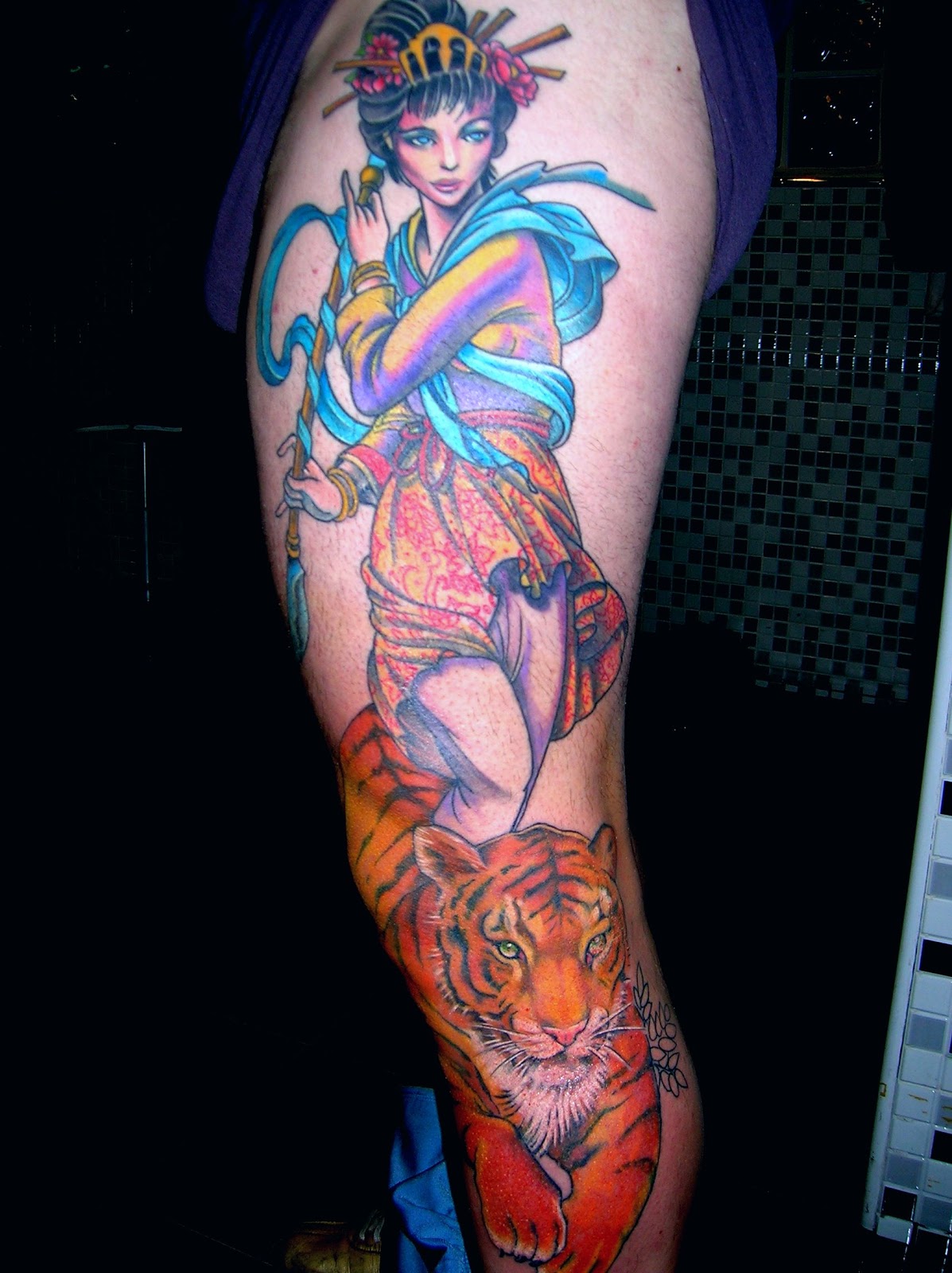 A geisha with a tiger on her feet 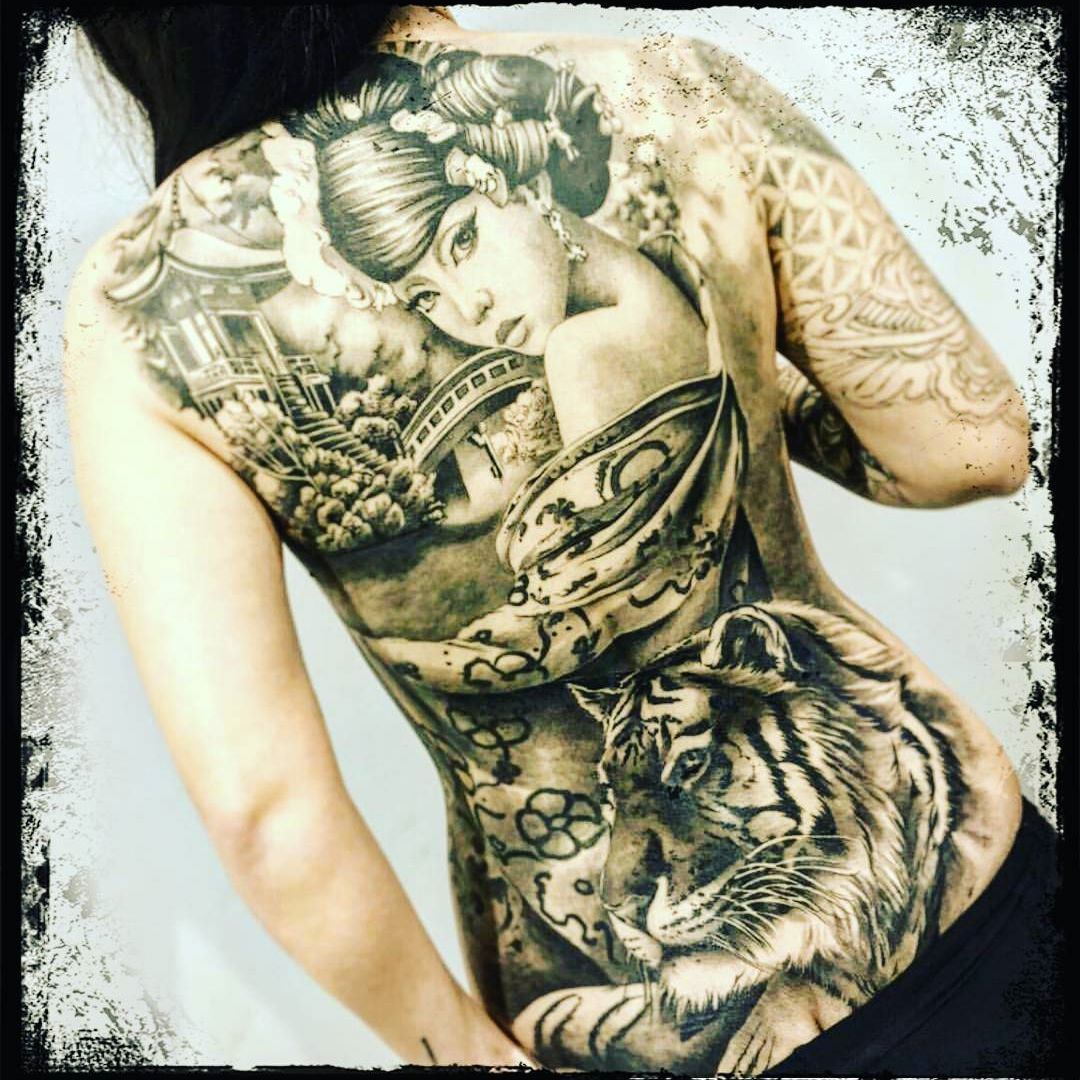 A sitting geisha with a tiger on the back Another tattoo of a half tiger half geisha’s face

If you still can’t decide on what symbol to pair with your geisha tattoo, don’t worry, you can just have a plain geisha image inked on your skin instead and just add symbols later. Such tattoo is versatile anyway and we’re sure you won’t have any problem pairing it with other symbols in the future. Here are some ideas. 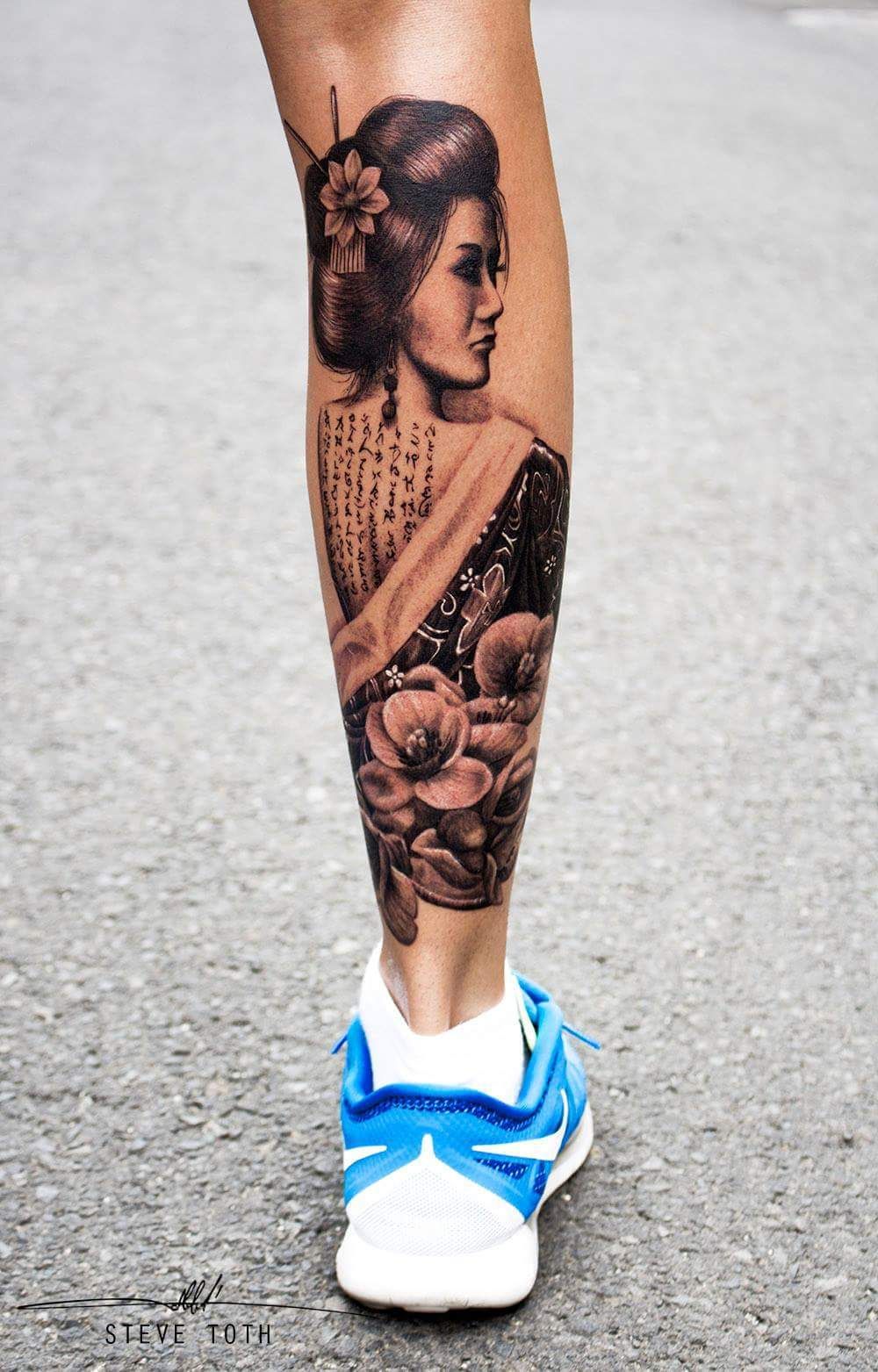 A geisha tattoo placed on the calf 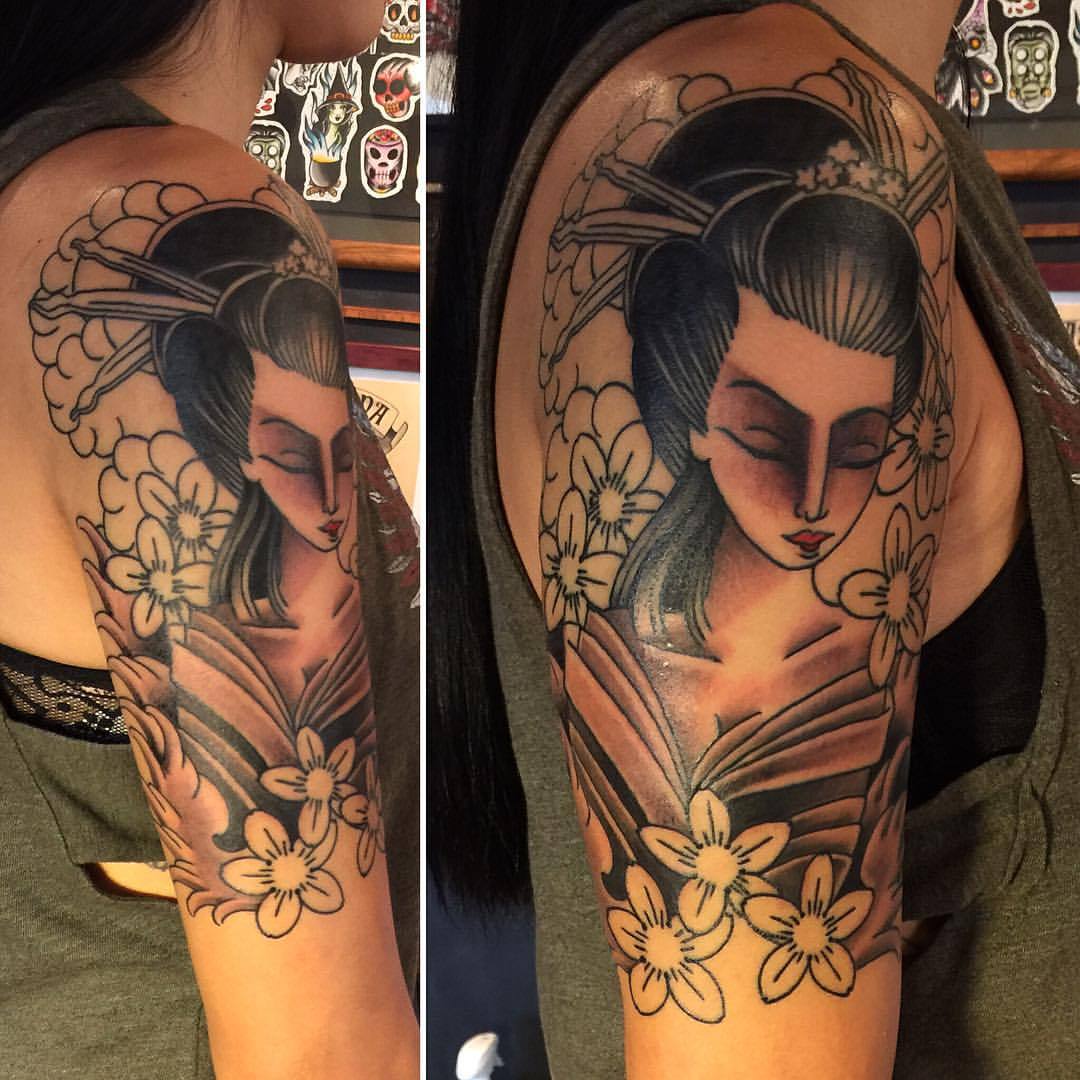 A half sleeve tattoo of a geisha adorned with flowers

Geisha tattoos are really one of the most aesthetically pleasing designs for body art out there. But it’s not the only reason why you should use it for your first or next tattoo. It is also meaningful. On top of that, it can be paired by various symbols related to Japanese culture that will make its meaning all the more significant and beautiful. And the best part of it is that it is a versatile tattoo that can be worn by anyone regardless of their gender preference. It’s really a kind of tattoo design that’s worth considering.