50 of the Very Best Mesmerizing Hamsa Tattoos Ideas and Designs 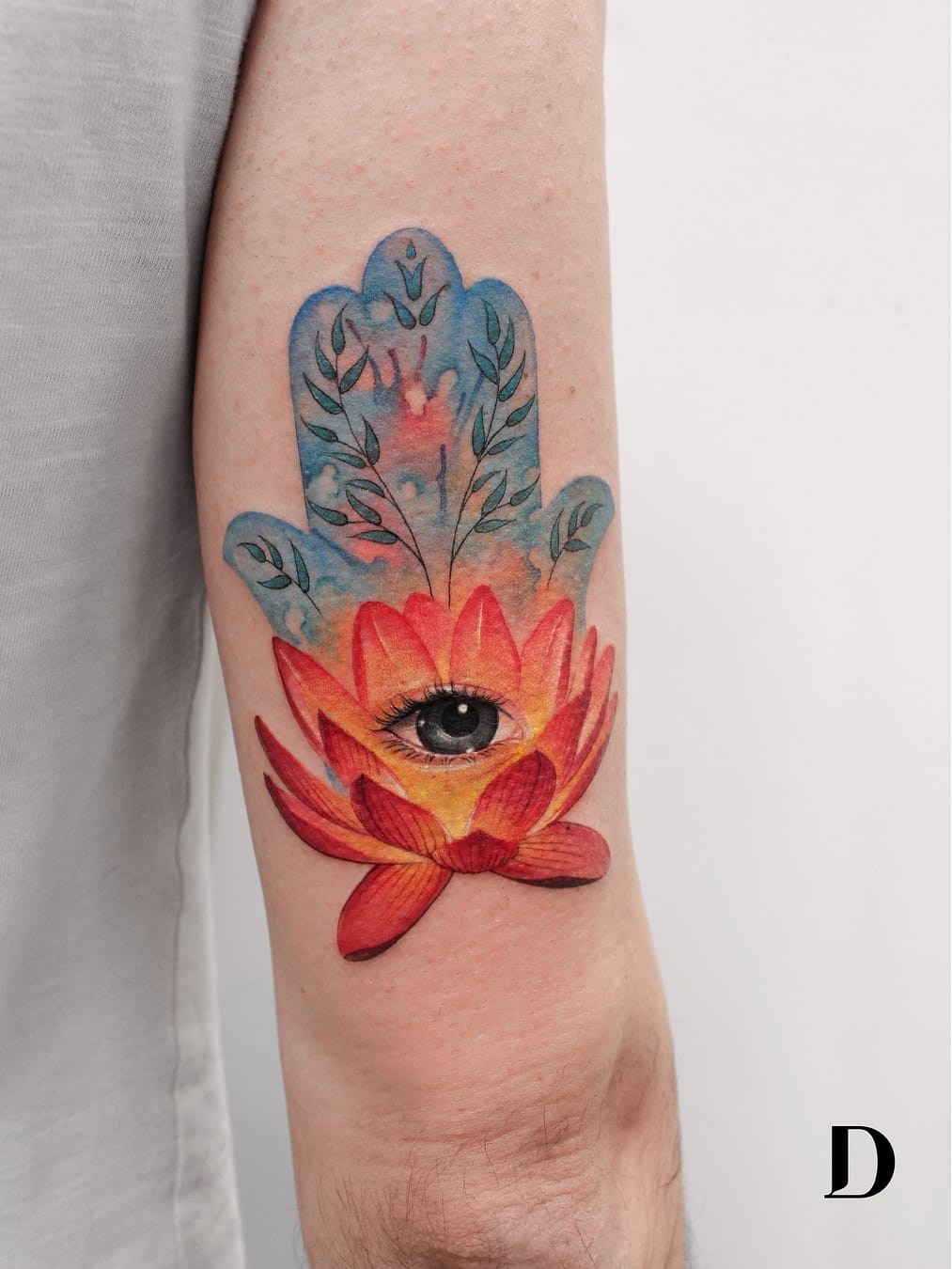 Some tattoos don’t always sit well with other cultures. The skull tattoo, for instance, isn’t always viewed positively in spite of the optimistic ideas that it can also portray like overcoming obstacles and/or protecting valuables.

But there are always the good one too – these tattoos are like the epitome of the good guys/gals that have no bad sides. One of which is the hamsa tattoo; and it’s one of the best symbols that you should go for if you want to play safe. It’s not just nice to the eyes but it also carries a good meaning.

Getting to Know Hamsa

For starters, the hamsa is a palm-shaped amulet that initially became popular in the Middle East and North Africa. It’s commonly used in jewelry, as well as wall hangings. But as time goes, it eventually made its way to the world of body art that draws the attention of all genders. It became that popular because its structure isn’t just mesmerizing to look at but because it also has different meanings and representations.

The hamsa craze may have started in the Middle East and North Africa. However, the ancient Greeks and Romans are the first ones to use this symbol. For them, it is a sign of protection. The Muslims see it as a symbol for protection too, especially against illnesses.

Other religions also see it as a symbol of protection. This is because hamsas are often drawn with eyes. And many people see it as a representation of the all-seeing eye of God.

For the ancient Egyptians, on the other hand, they believe that it is associated with Horus, the Egyptian god of the sky with a head of a hawk. And this symbol means that one is always being watched and that no one can escape the eye of their conscience.

Many of us are probably familiar with the upright hamsa tattoos ideas and designs. However, did you know that you can wear it in another way aside from that?

Yes, you read it right. There are actually two types of hamsa tattoos: the upright and the upside-down – in case you’re thinking the latter is wrongly drawn or whatnot.

The upright hamsa tattoo is believed as a symbol for protection and bravery. They can also mean success and good luck. 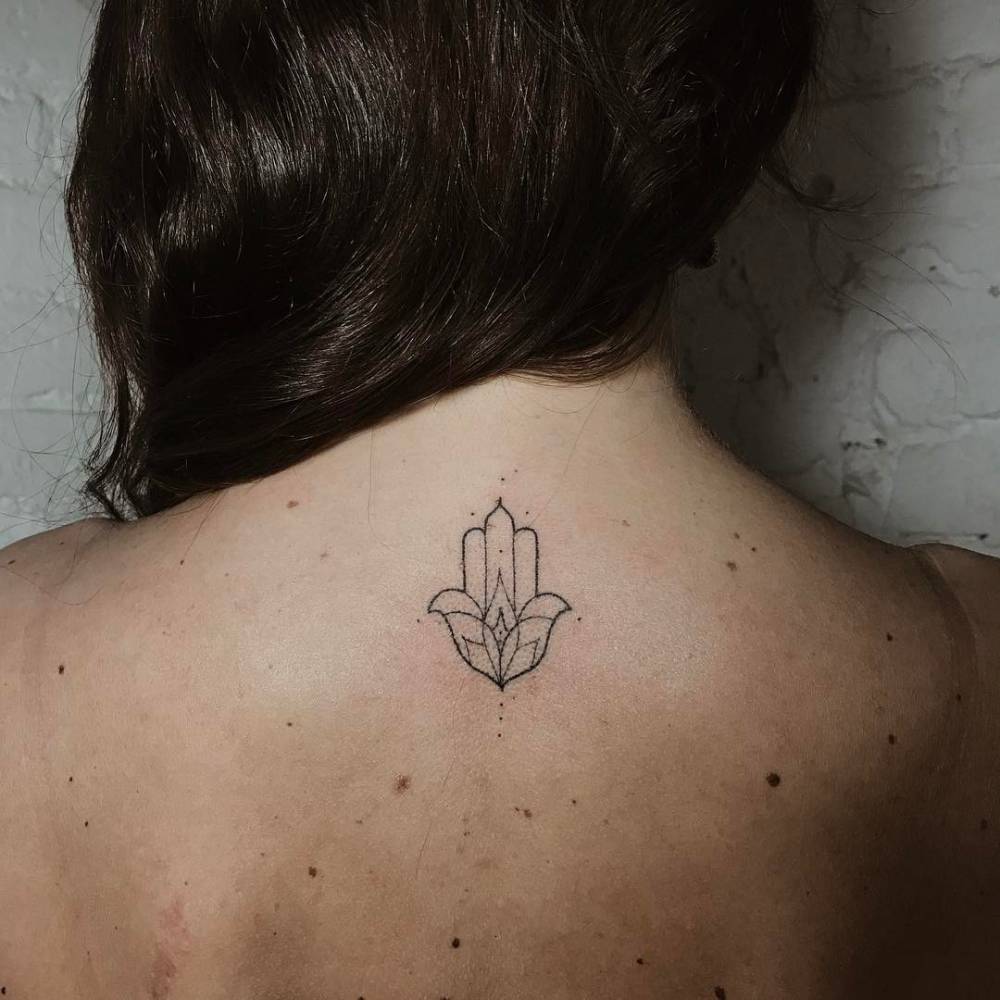 An upside-down hamsa etched on the wrist

You can design your hamsa tattoo however you want, though. It’s so versatile that no matter what your gender preference is, it will surely suit you. It can also work well with other symbols. In case you need some ideas, don’t worry, we got your back. 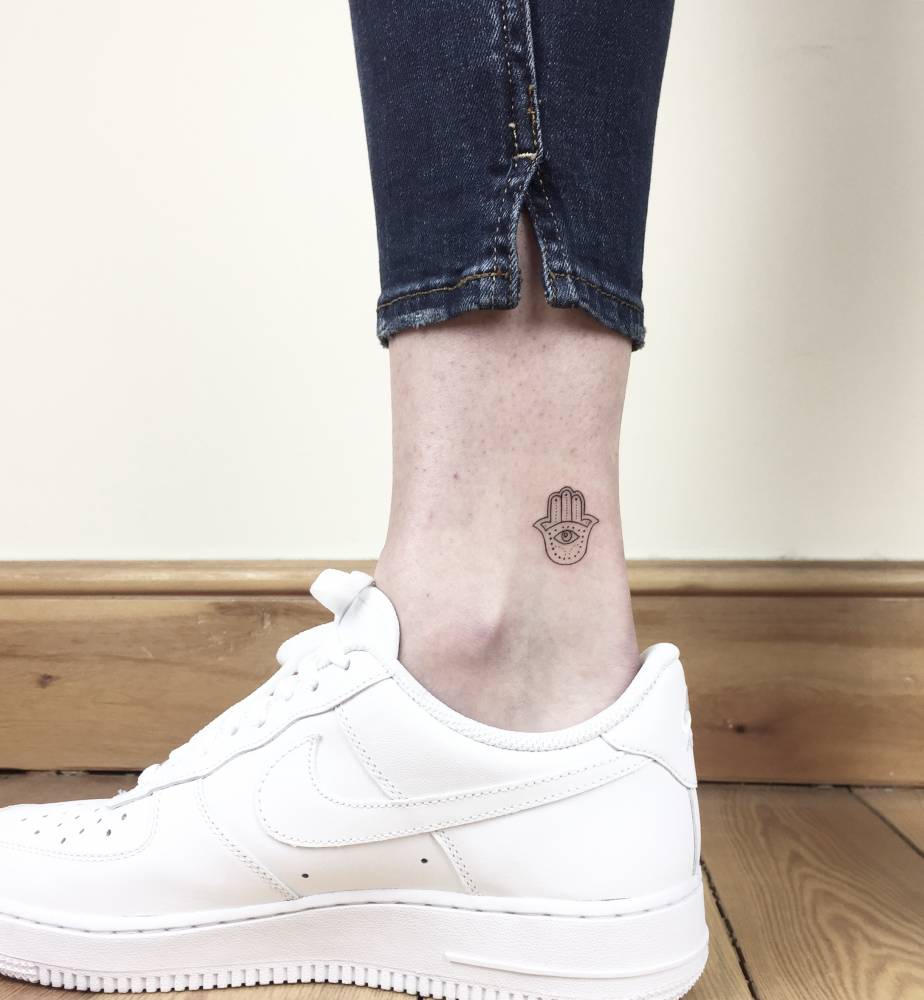 A small hamsa etched on the right ankle A dotwork hamsa tattooed on the left forearm 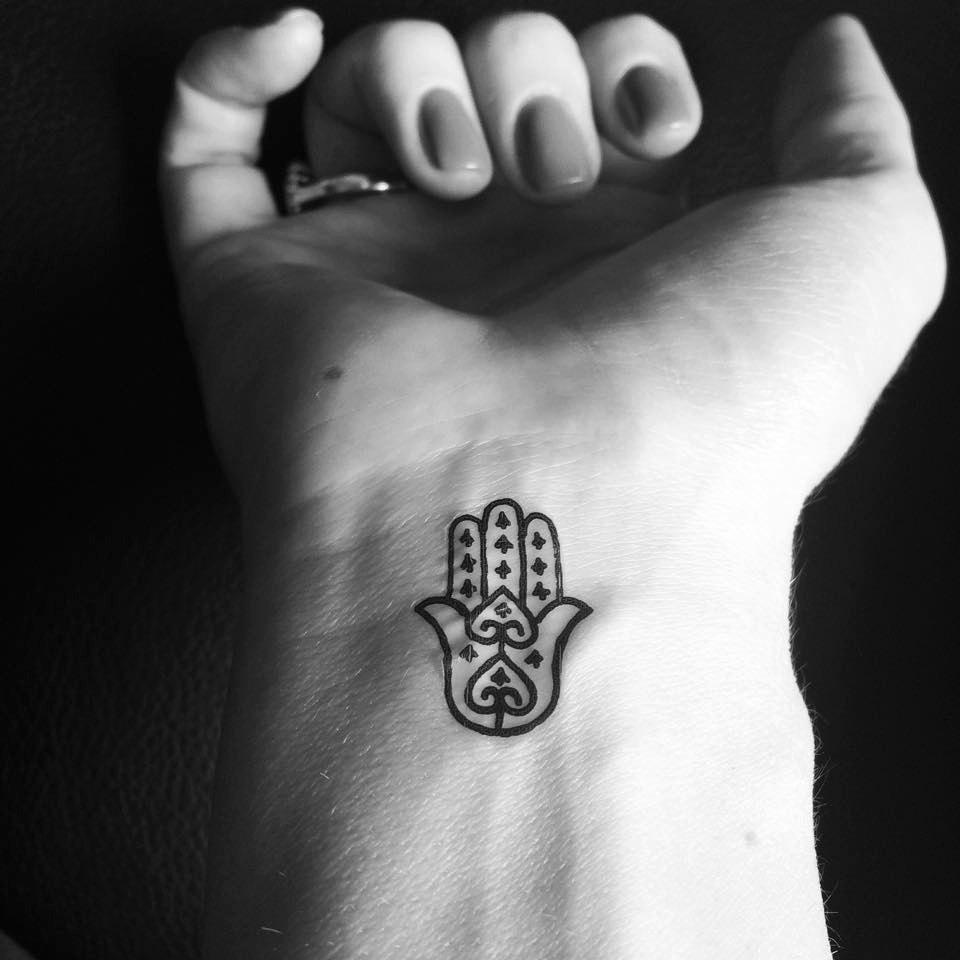 A hamsa paired with hearts and cross tattoos

A hamsa with elaborate details placed on the left forearm

A simpler hamsa placed on the right ankle

The simple hamsa tattoo can already catch the attention of others because of how mesmerizing its details are. But if you want to give it more oomph, you can make it more vibrant and make it colored. 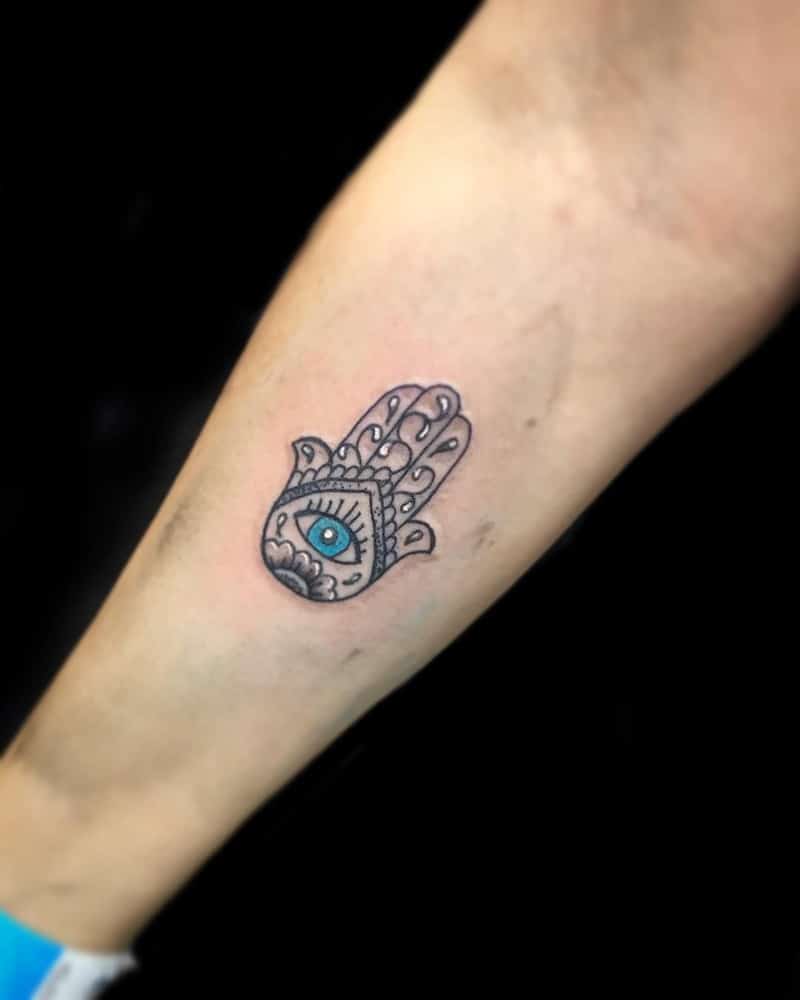 A hamsa tattoo with a blue eye 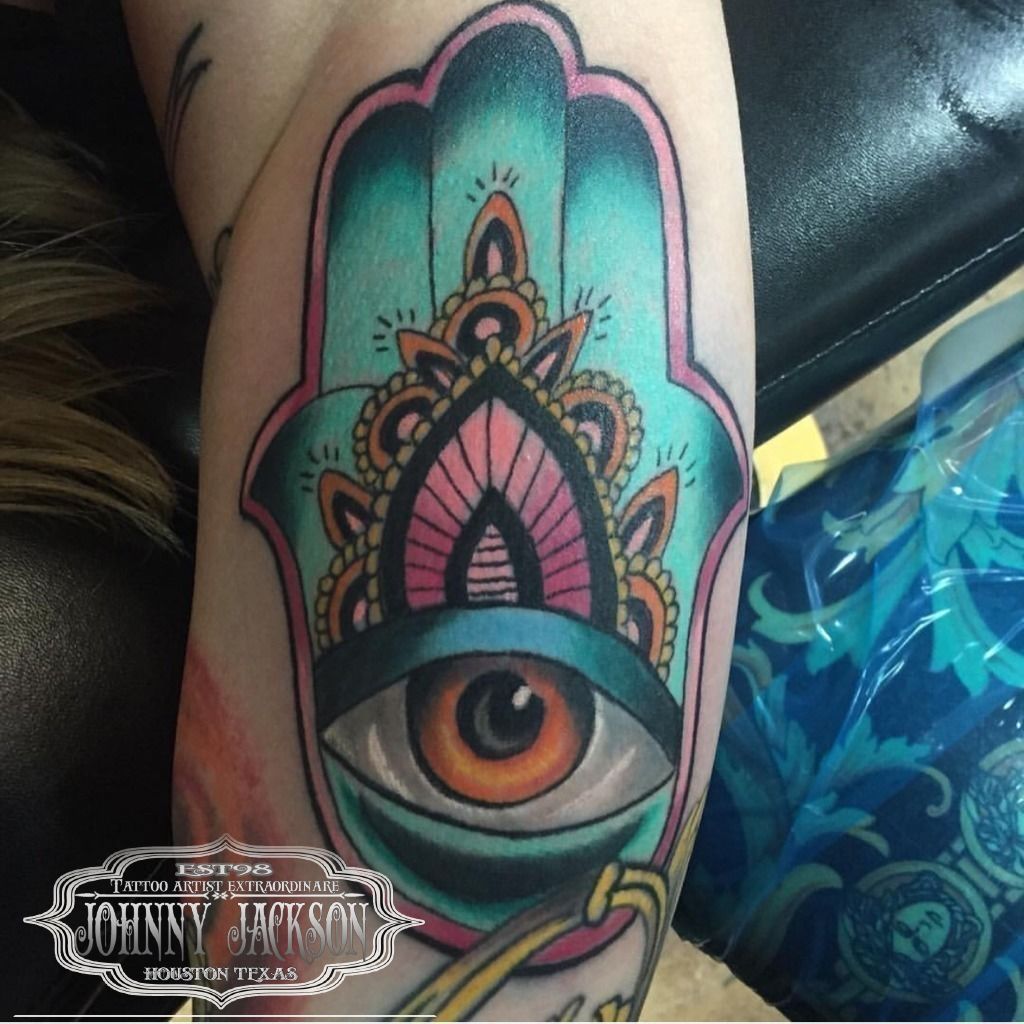 A hamsa tattoo with blue, pink, and white color accents 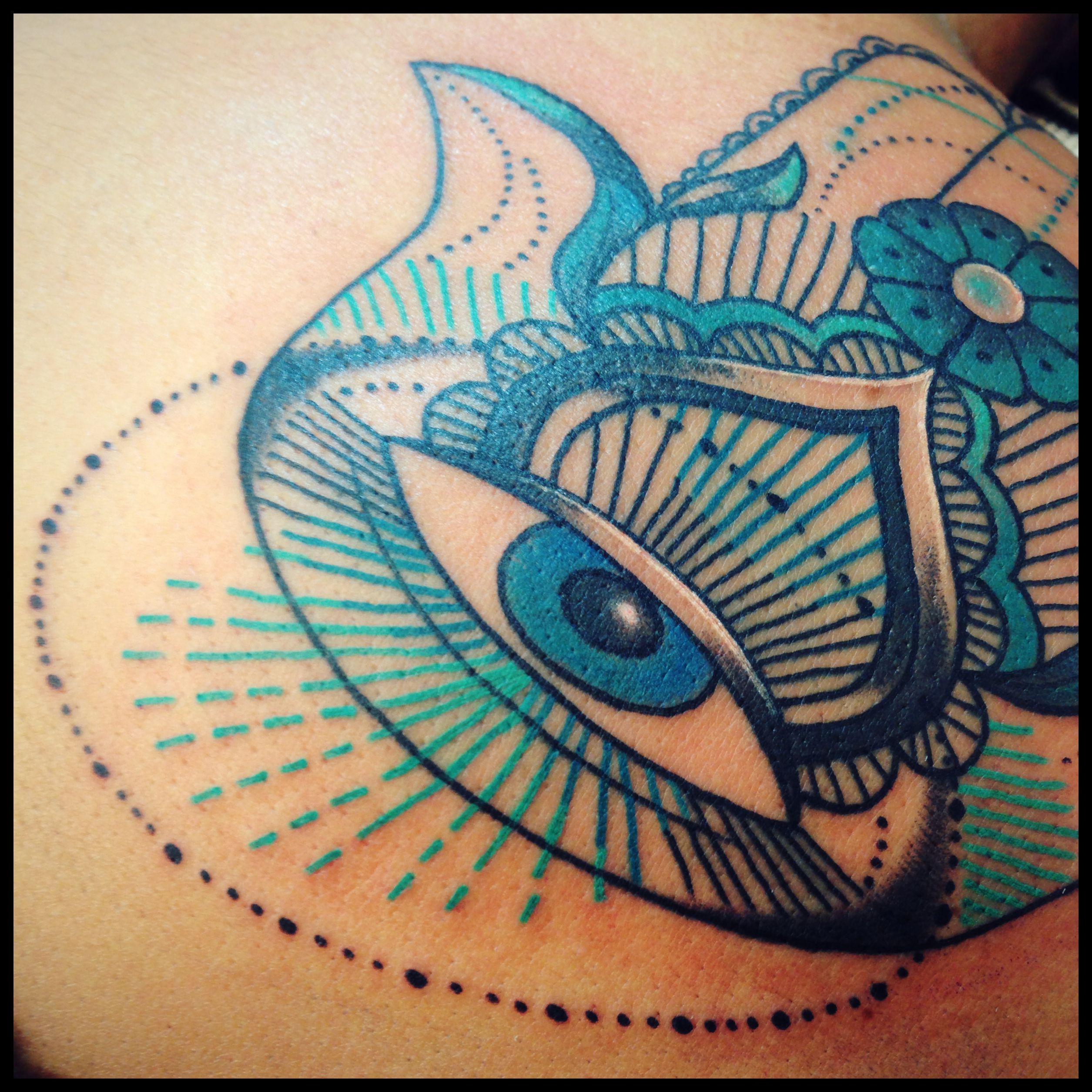 A hamsa tattoo in different shades of blue ink 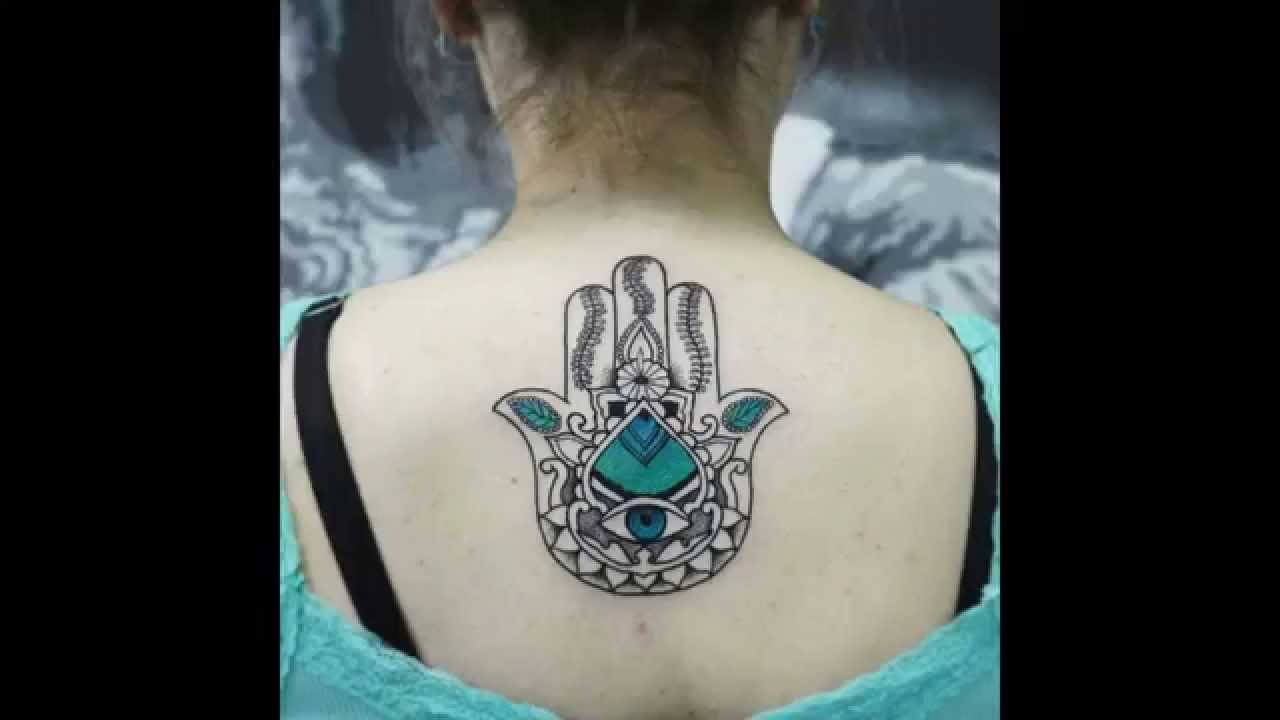 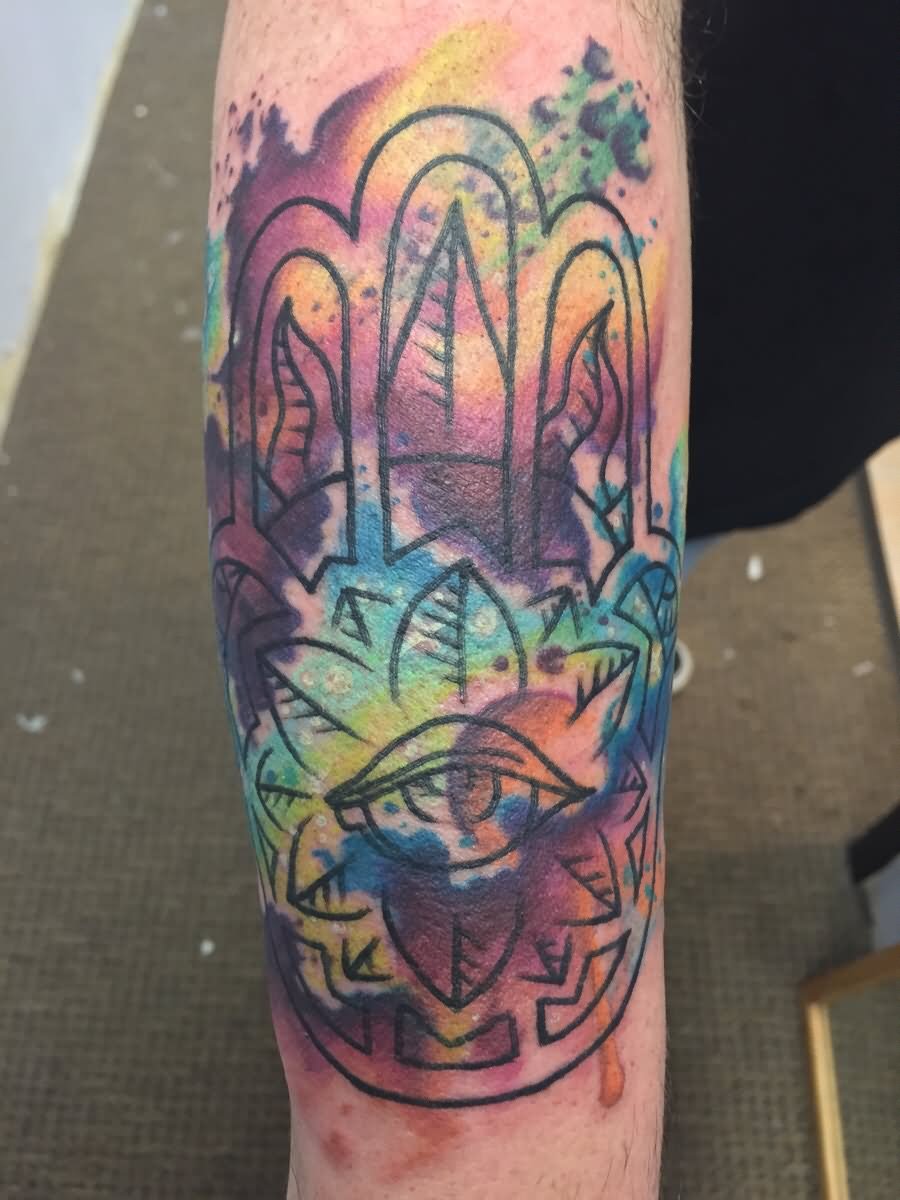 The star tattoo designs are one of the versatile symbols that can work well with any tattoo. Needless to say, it can also work for your hamsa tattoo and make it all the more meaningful. For starters, it can represent your relationship to God. It can also serve as your protection against the darkness. You draw the usual depiction of stars or you can also add the Star of David, which represents King David’s shield. 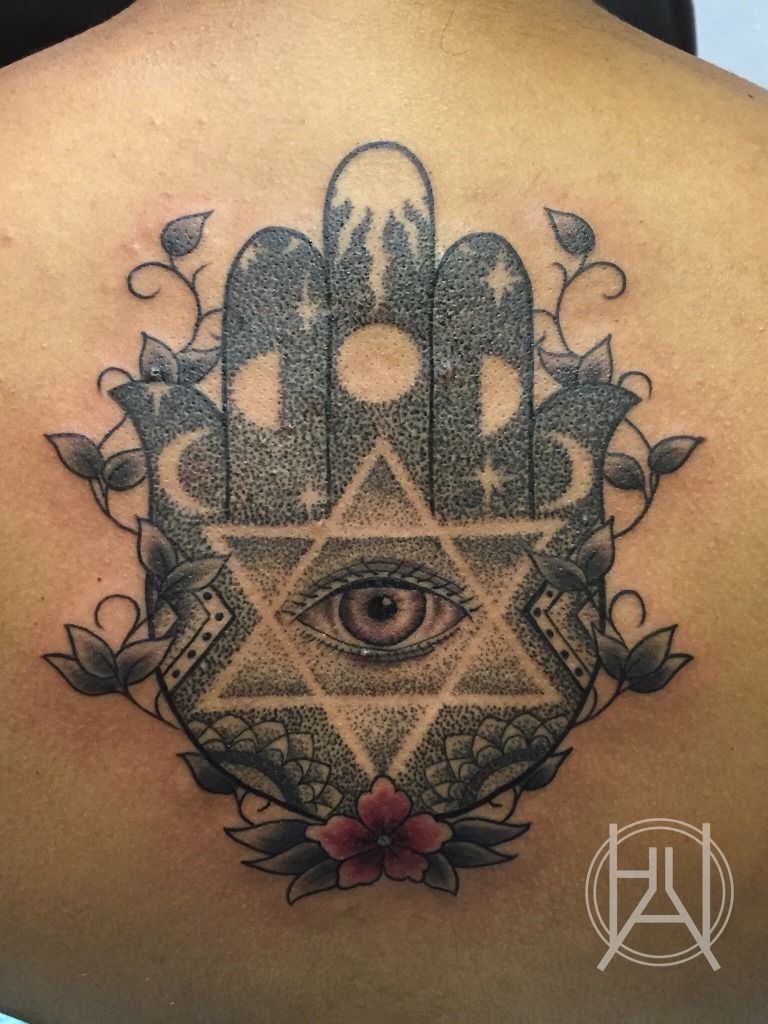 A dotwork hamsa tattoo with the star of David 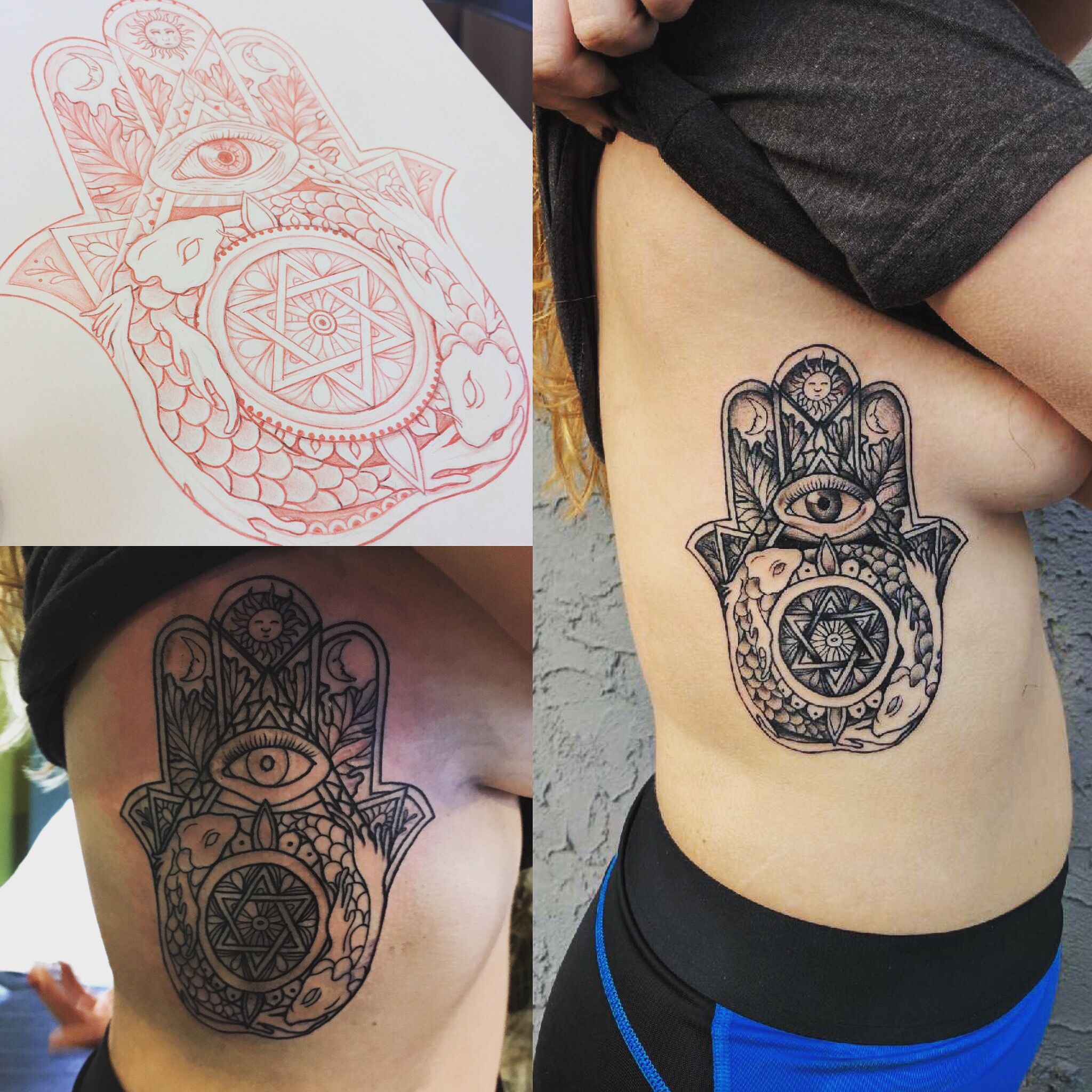 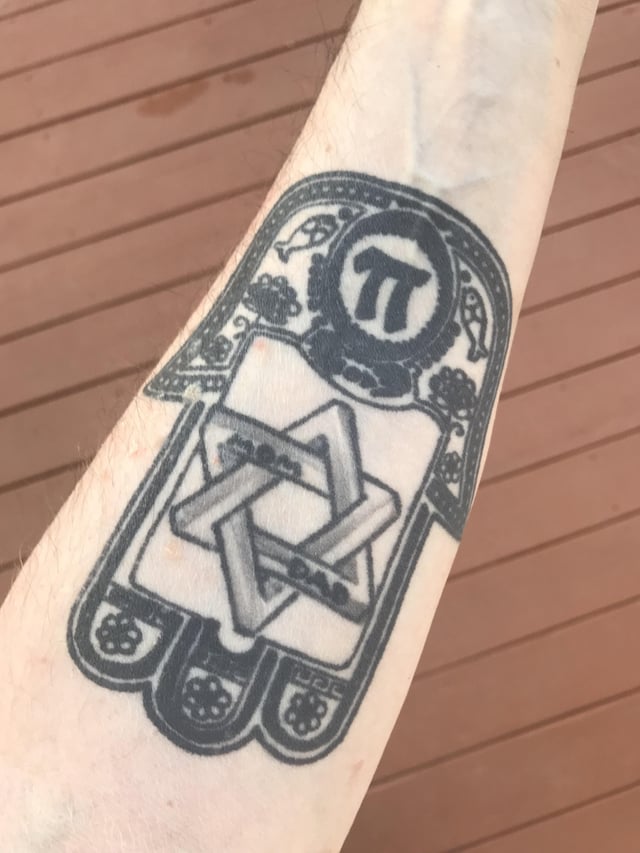 An upside-down hamsa with the star of David

A traditonal style hamsa tattoo with a unique star 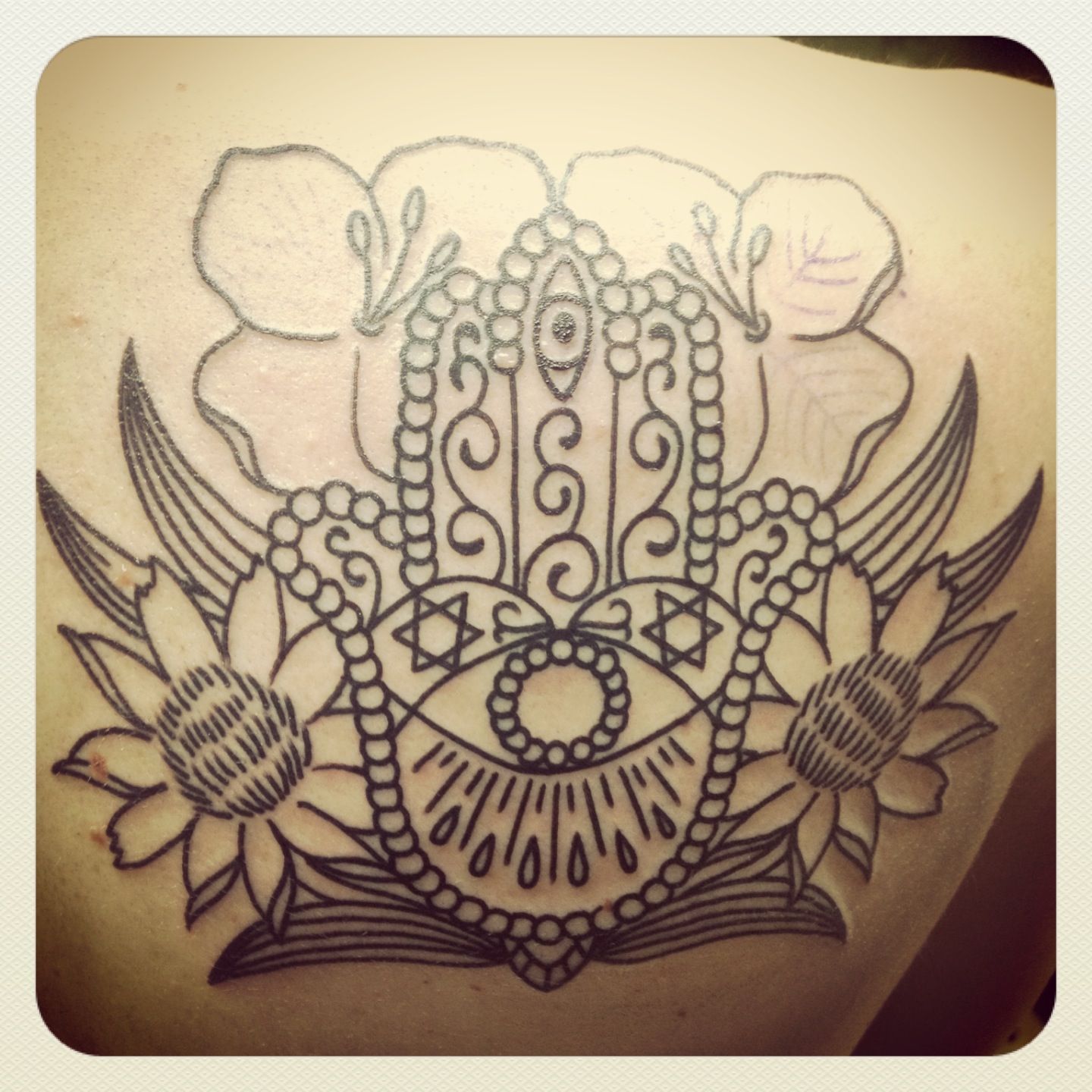 A huge hamsa tattoo with two stars of David 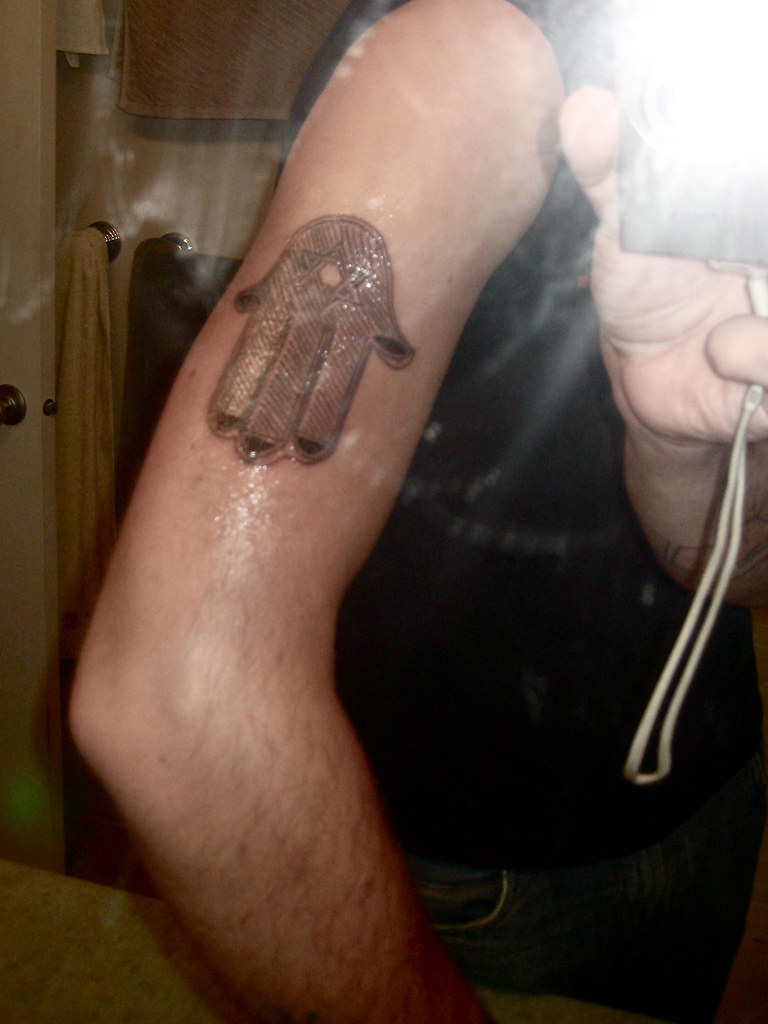 An upside-down hamsa with the star of David 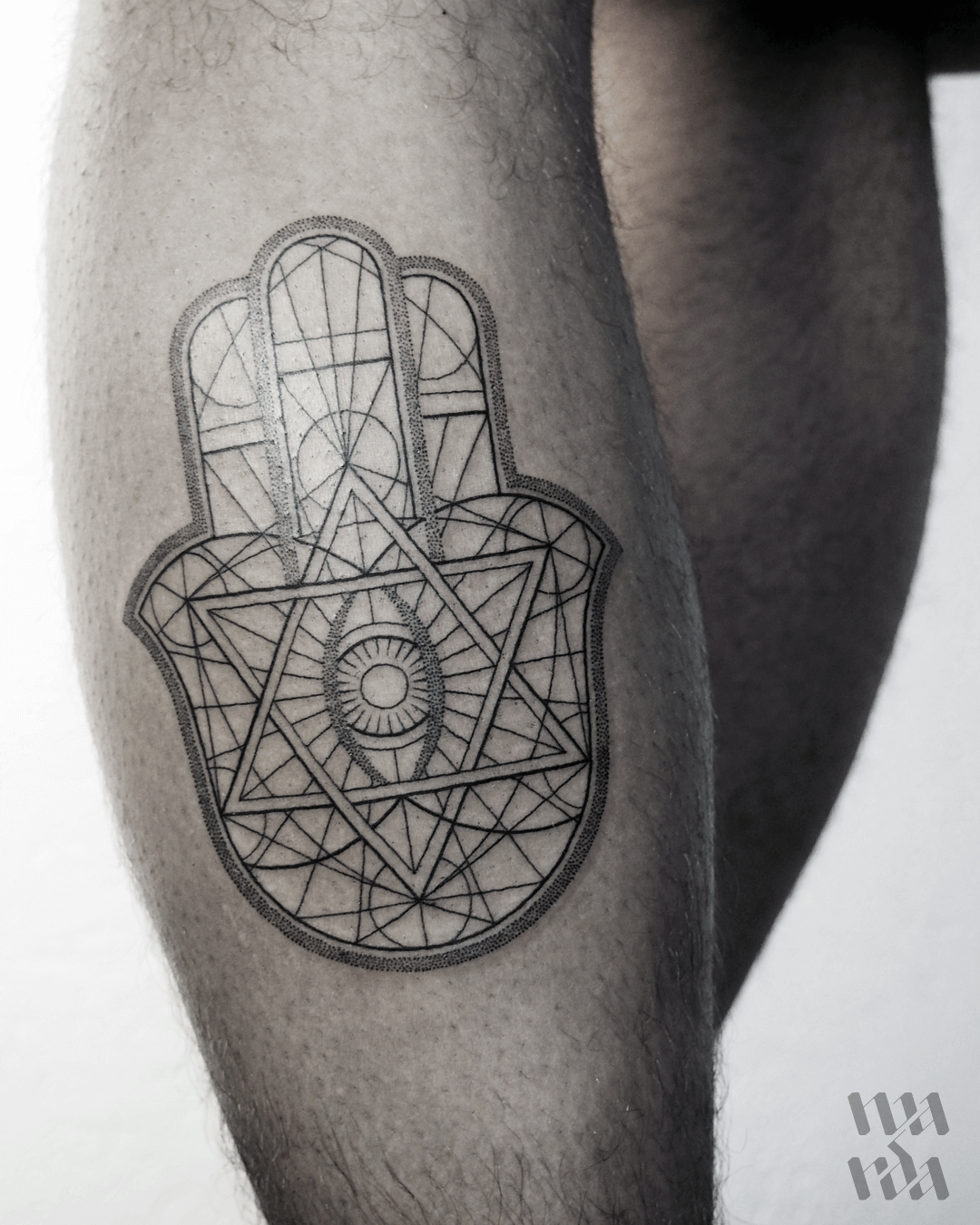 Flower tattoo designs are also versatile and can work with any other tattoo designs – even the hamsa. It can also enhance its meaning depending on its type and color. The rose tattoo alone can depict hundreds of meanings depending on its color. The red represents beauty, love, passion, and respect. The white rose represents purity and youthfulness. The yellow one is associated with friendship the pink is for happiness; and so on.

An upright black ink hamsa tattoo with roses underneath 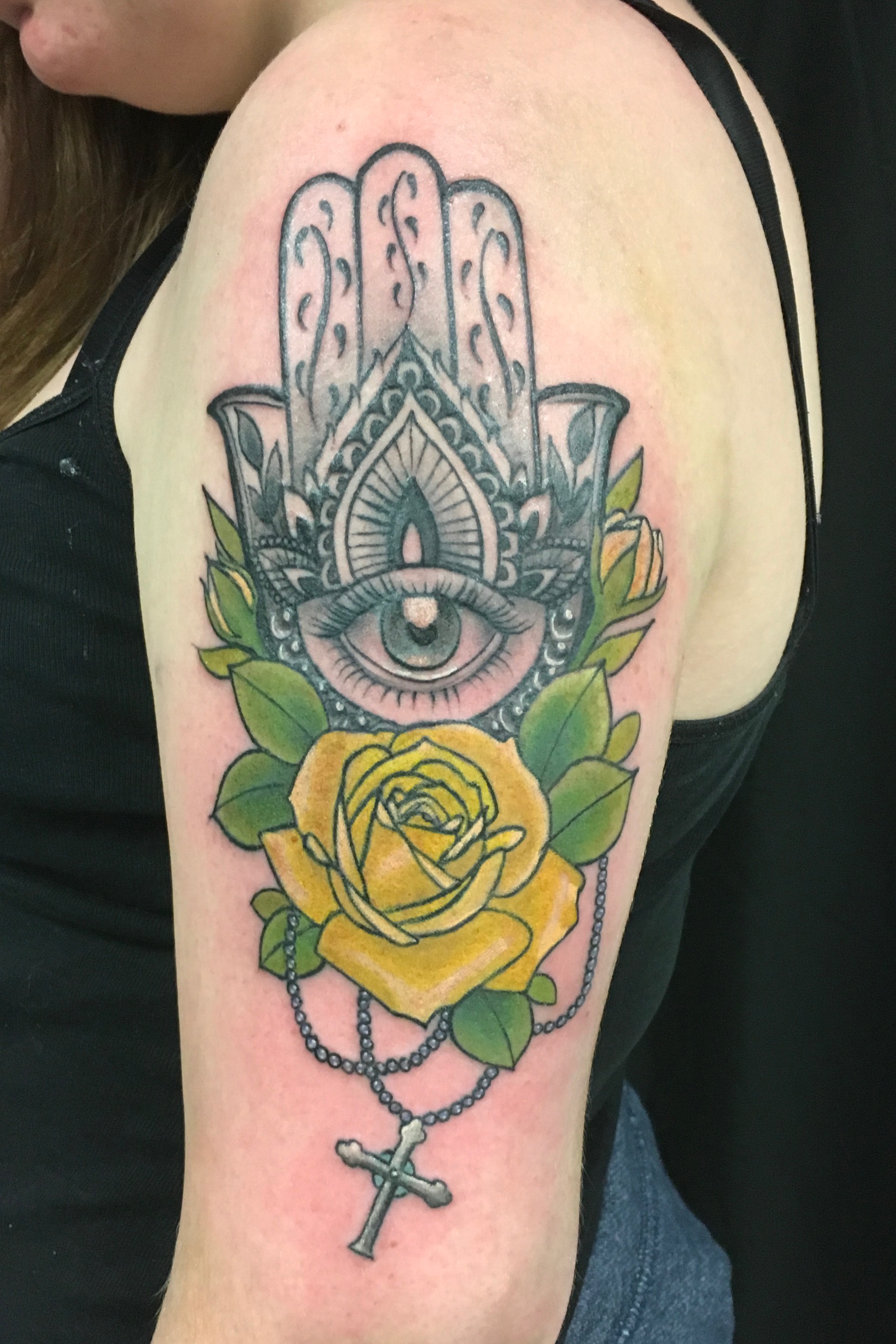 A black ink hamsa and cross tattoo with a yellow rose 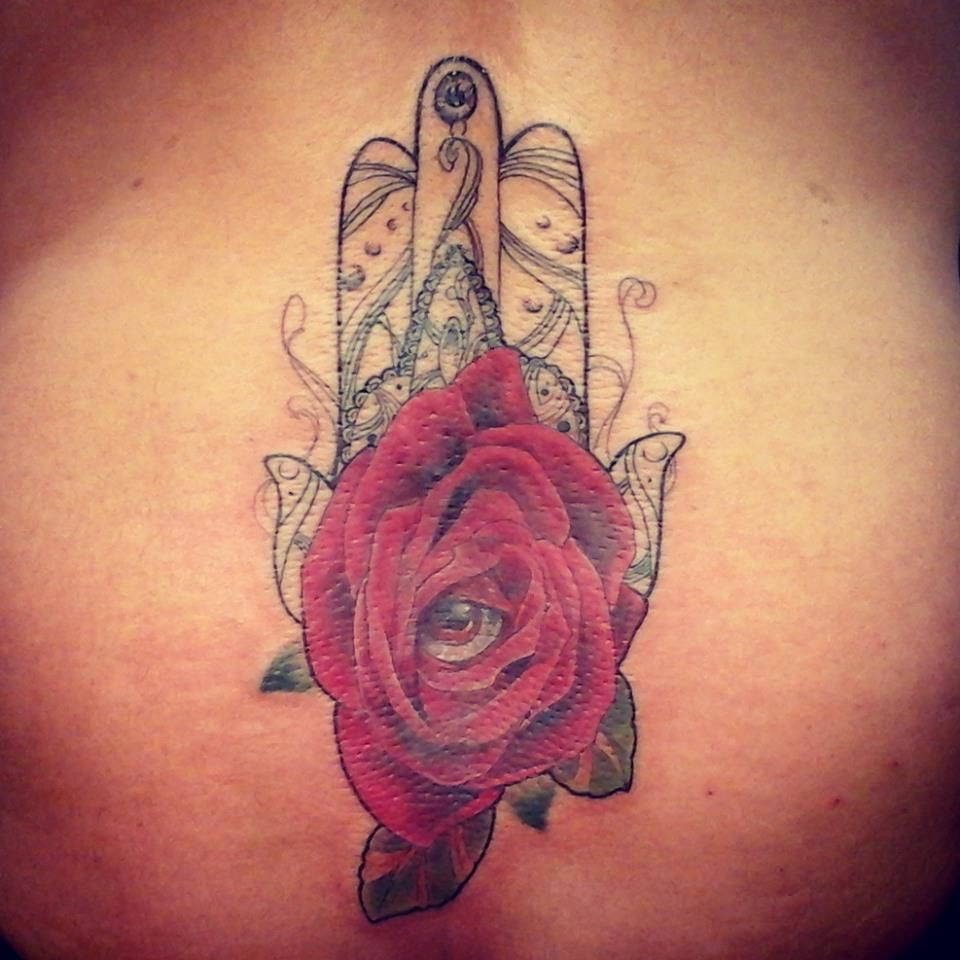 A hamsa with a realistic red rose tattoo 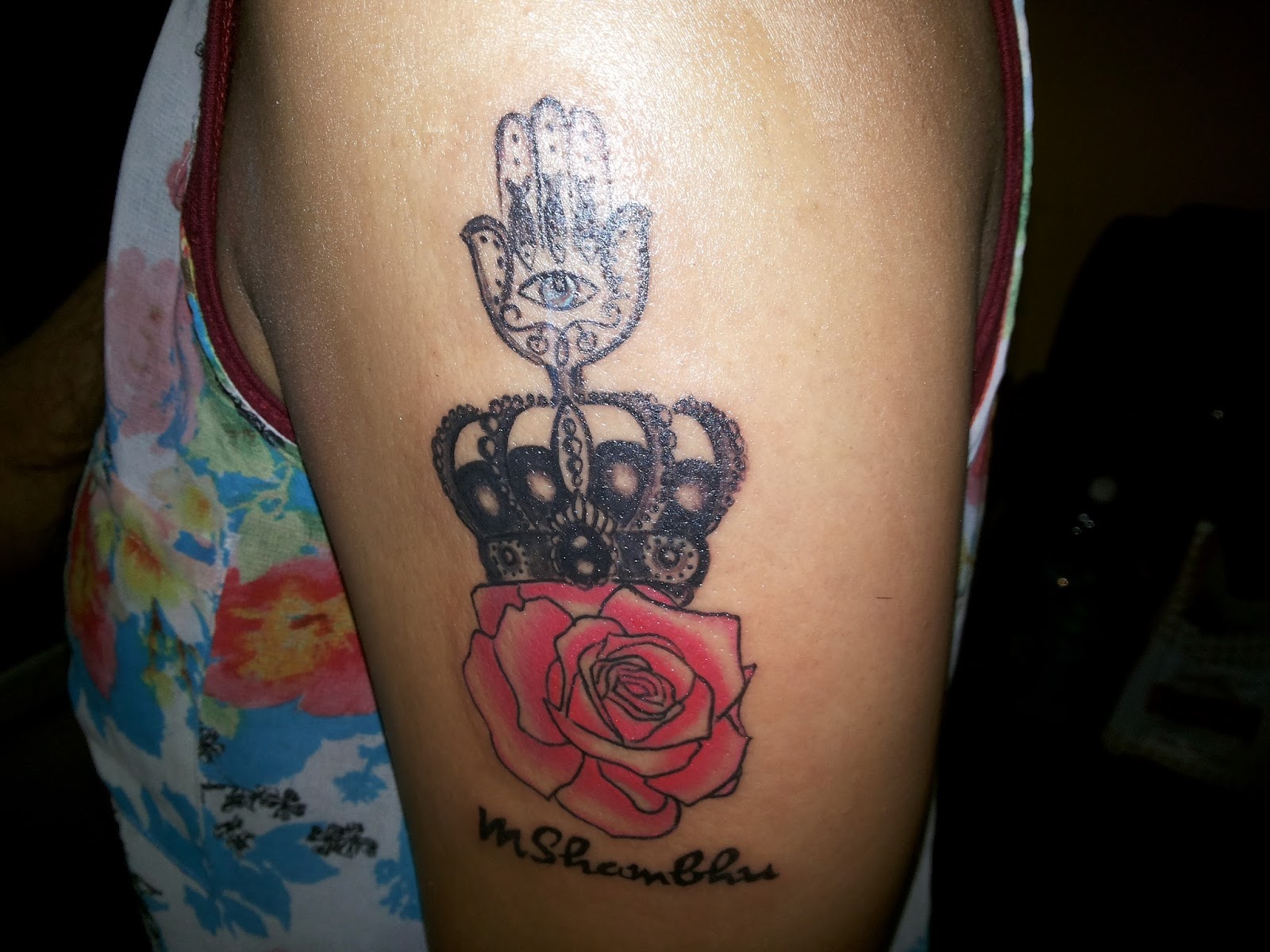 A combination of hamsa, rose, crown, and word tattoo designs

A rose placed below a geometric hamsa tattoo

The lotus tattoo is also a popular choice in the world of body art because of its aesthetics and meaning. Like the rose, the lotus can also represent beauty and purity. However, it leans more on the spiritual side of the person wearing it. It is also often associated with the gods Lakshmi, Vishnu, and Brahma. And when drawn with opening petals, it can symbolize one’s spiritual awakening and expansion of the soul which is also a perfect pair since the hamsa tattoo is also associated with the god above us.

A dotwork hamsa with a lotus flower and infinity symbols 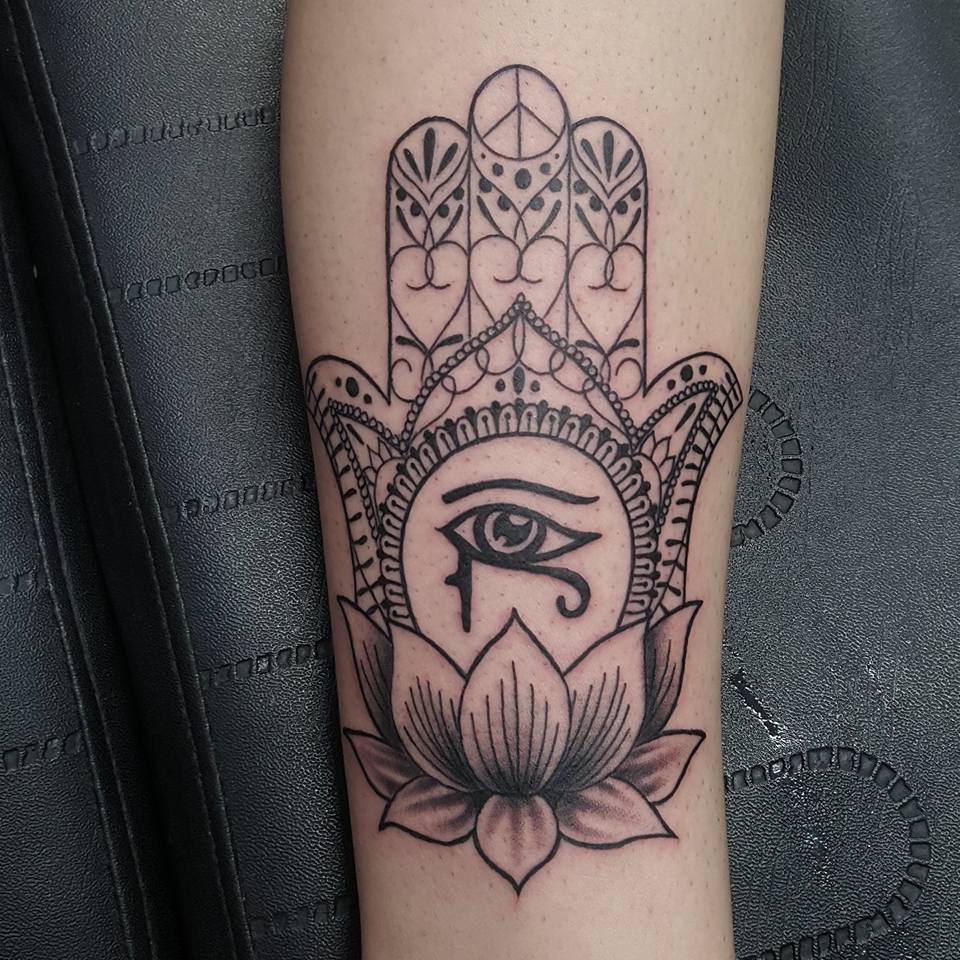 A back tattoo of hamsa and lotus with lace details

A graceful dotwork tattoo of a hamsa with lotus

A hamsa and lotus tattoo accentuated with green and pink ink

An ornate hamsa and lotus tattoo placed on the sternum

A hamsa and lotus tattoo paired with other tattoo symbols 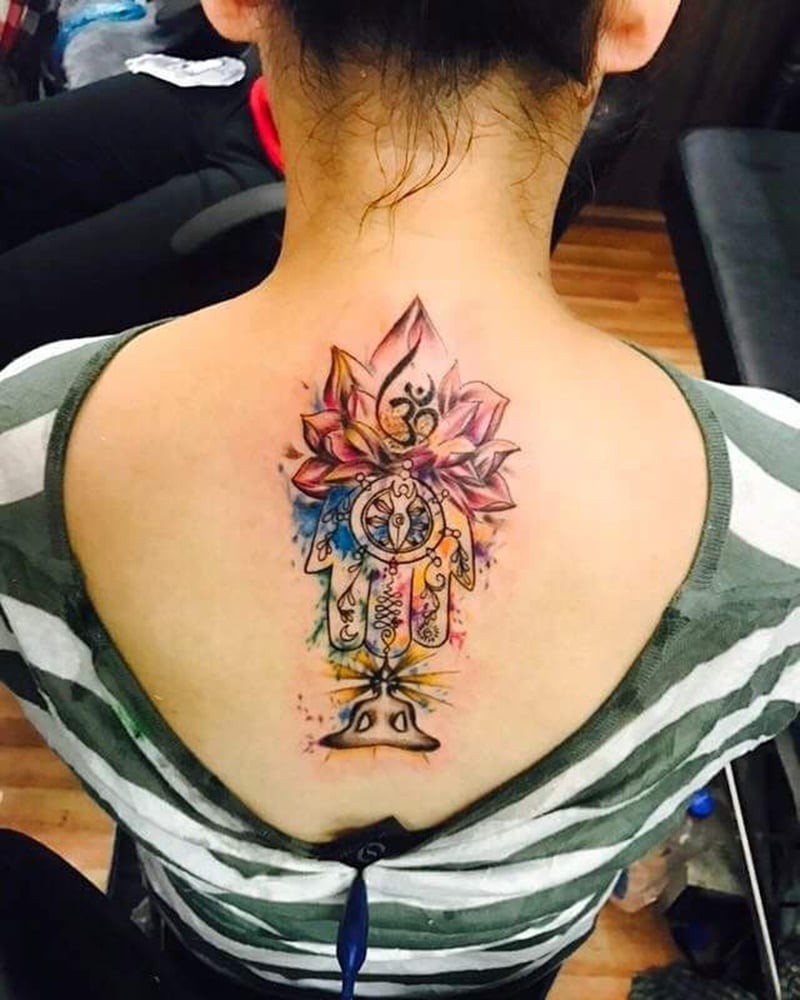 A brightly colored watercolor tattoo of hamsa and lotus

There are also a lot of flower tattoo designs that you can pair with different hamsa tattoos ideas and designs. It depends on your liking based on its look, color, and/or meaning. 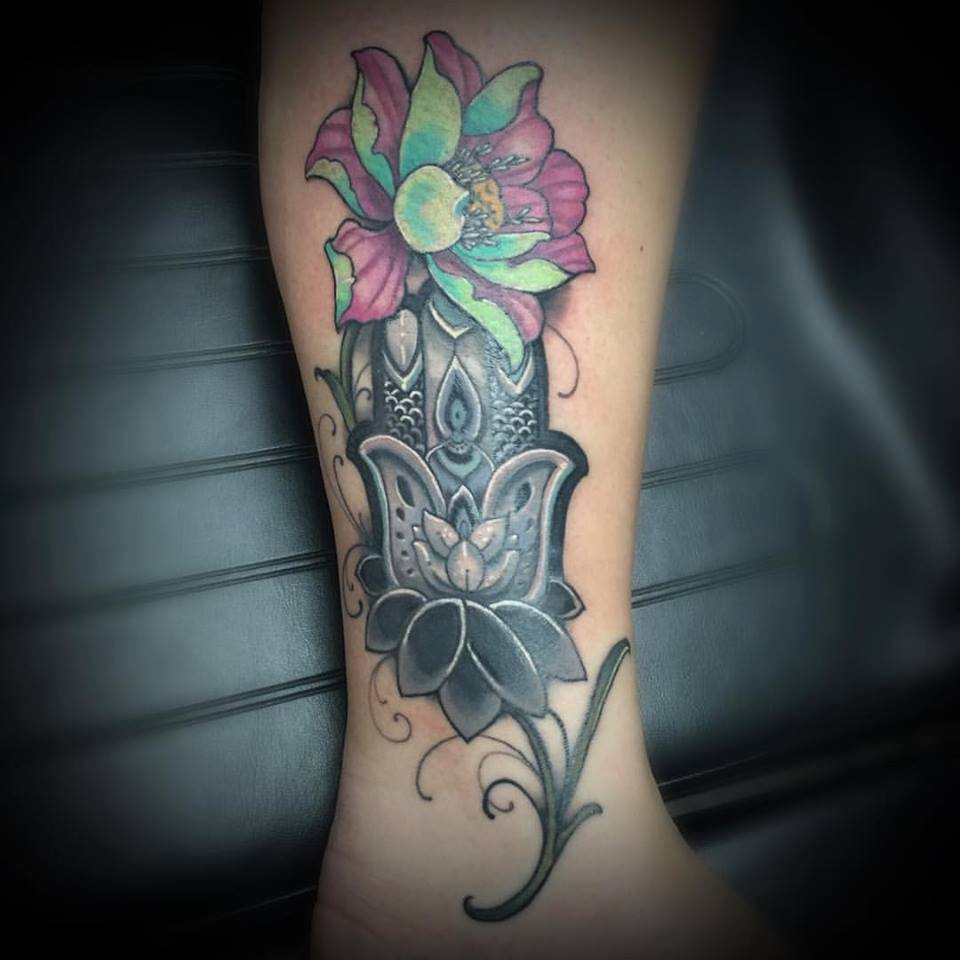 A watercolor hamsa tattooed on the back area 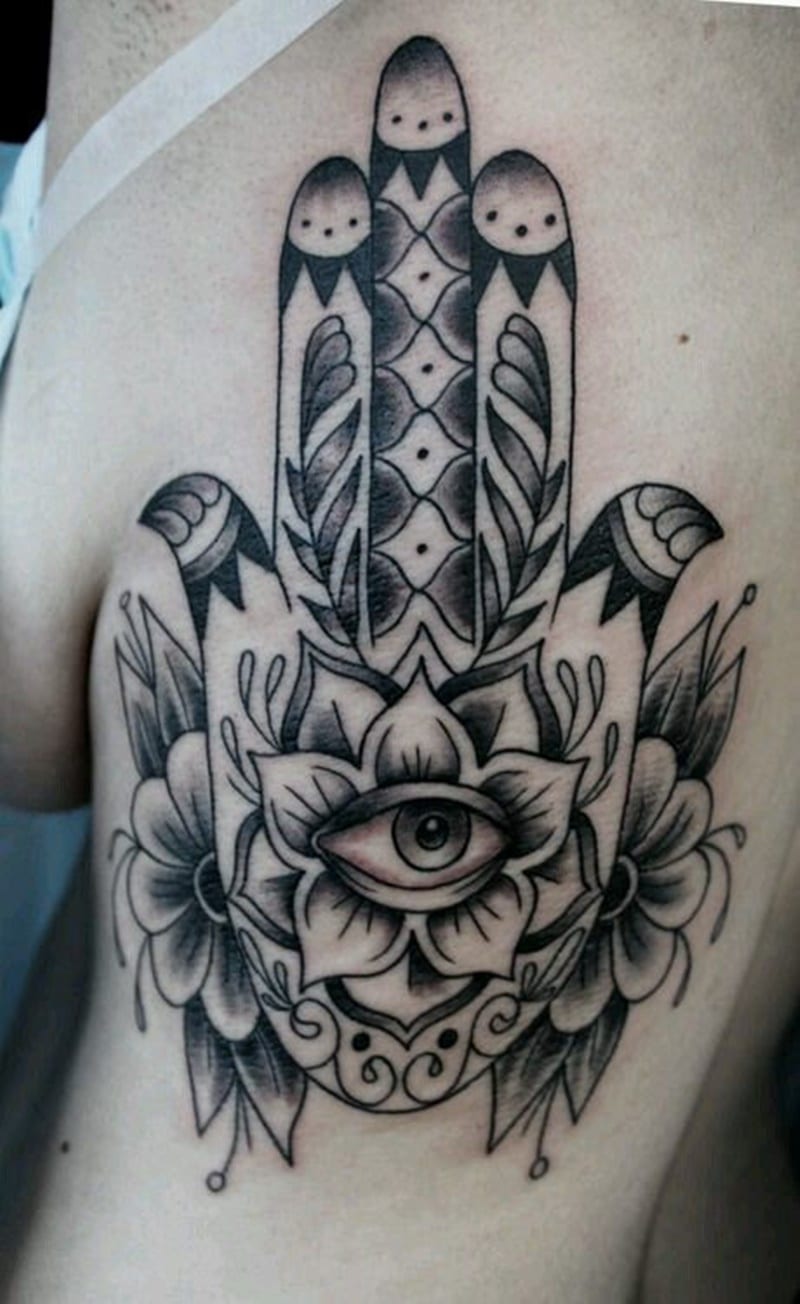 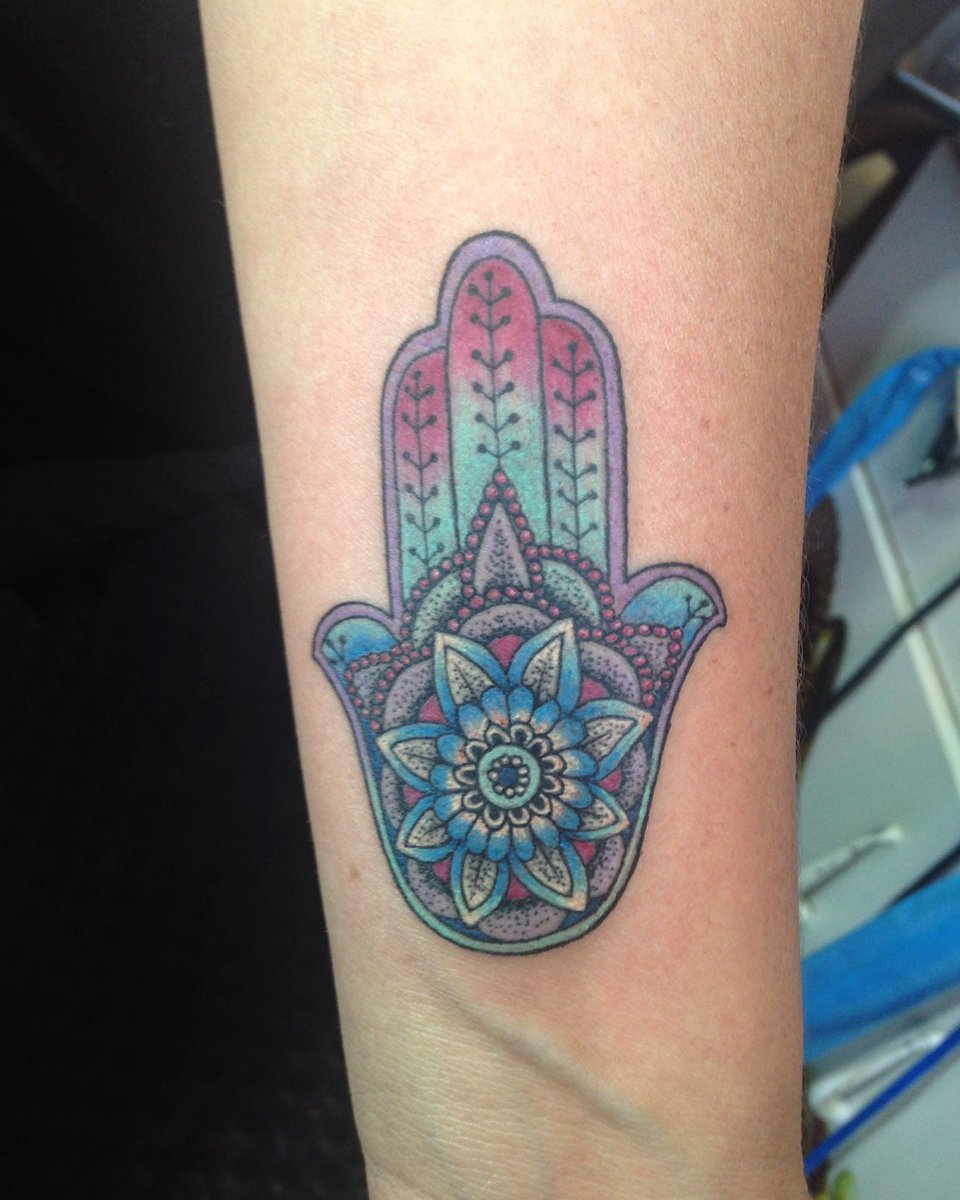 Elephant tattoos are majestic and they make a good pair with hamsa tattoos ideas and designs too. Just like the hamsa, elephants are also associated with good luck. Apart from that, it is also known as a depiction of prosperity, power, dignity, longevity, and strength because of the character of elephants. A hamsa with an image of an elephant camouflaged 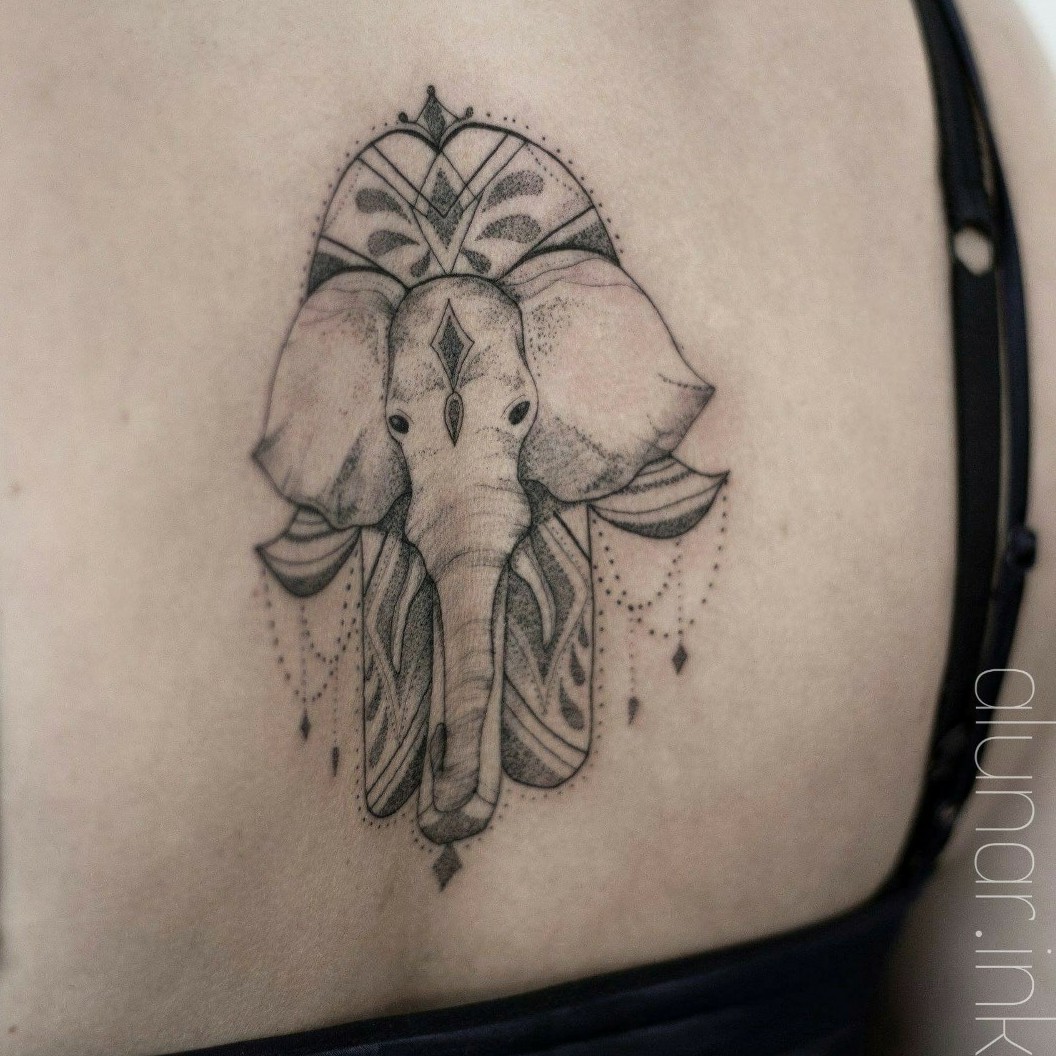 A hamsa and elephant tattoo with lace details

50+ Wholesome Chakra Tattoos Ideas and Designs for Everyone

50+ Unique Snowflake Tattoos Ideas and Designs to Show Your Individuality

50+ Family Tree Tattoos Ideas and Designs that are Forever