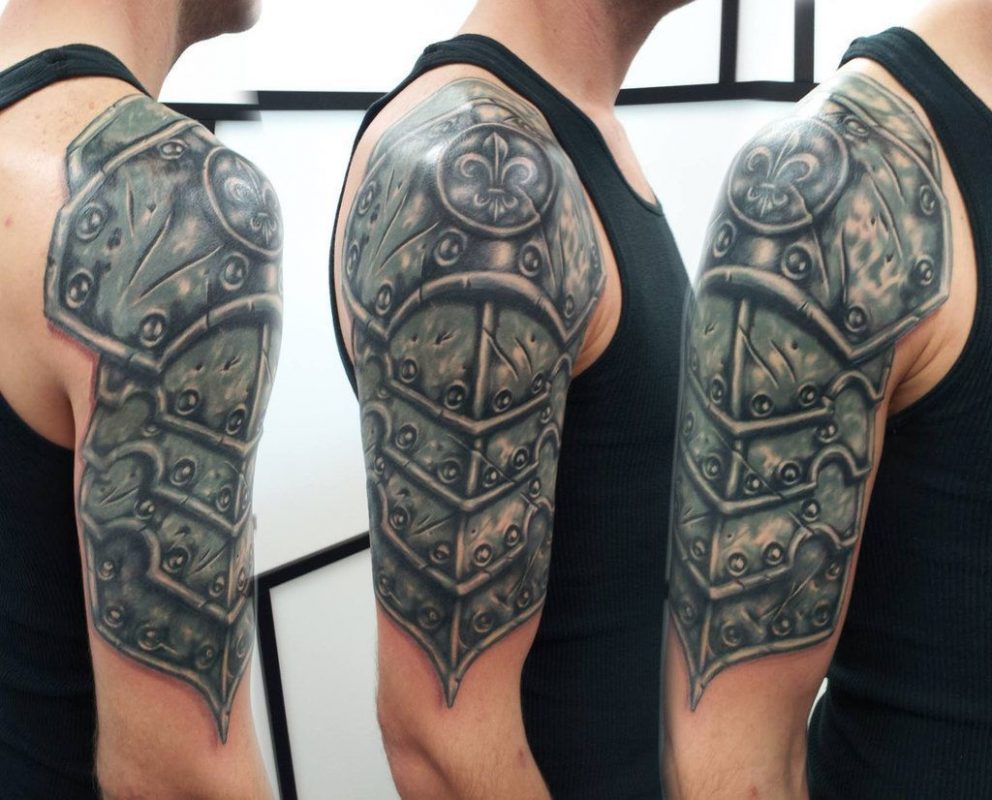 Armors have existed for as long as wars and battles did. People go to war for resources, power, and influence. In these dark times, an armor has been a symbol of protection for not just the one who wears it but the society the wearer protects. In this day and age, visible armor is now almost non-existent because of the technological advances we made to make it more hidden, subtle, and strong. We now live in a time where a simple cloth could be an armor even stronger than iron plates. But just because armor became out of fashion, that does not mean its legacy died. The heritage and image of body armor still live on through armor tattoo designs inked on the skin of people.

A Brief Background On Body Armors

The body armor we are familiar with from movies, tv shows, and museum exhibits date back from the Greek classical era. The Myceneans made the first recorded bronze plated full body armor. This armor became the archetype for future body armor until the dawn of the modern era and the advent of manpower battles.

There are a lot of kinds of body armor developed after the initial invention of the Myceneans. During the middle ages, body armors are aplenty due to the different kingdoms, principalities, and states that sprung up especially in the old world (Europe). There are leather, chainmail, bronze-plated, iron-plated, brigandine, splinted, and other kinds of armor that offers different kinds of protection. Most famous of these armors is the iron-plated armor which is often depicted in movies, television shows, and paintings.

The body armor each knight or footmen wears bear the symbols of the society they protect. The body armor symbolizes the might of that specific society. The more complex and stronger the armor is, the more powerful and rich the society the wearer protects. Oftentimes, the knights who wore heavy iron-plated body armor not only symbolizes protection but moreover, it also exhibits the status of the individual who wears the armor. This can be seen if you compare the body armors of footmen, cavalrymen, knights, paladins, and royalty.

What Are Some Of The Famous Body Armor Pieces?

Do not know what kind of armor you want to be inked on your body? Here are a few armor pieces that are quite famous that is often featured in armor tattoo designs. (source: www.wikipedia.org)

Do Armor Tattoo Designs Have Any Meaning?

The meaning of the armor did not change even to this day when body armor can only be seen on the screen and in museums. Having a type of body armor be inked on your skin signifies strength, courage, and bravery. These meanings are a nod to the people who once wore these armor, risking their life and limb just to protect the people of the society they are serving.

The Advisable Places To Have Armor Tattoos

Since you now have a background in armor tattoo design, here are a few ideas we have seen on the web that might interest you to have one inked.

We have grouped each armor tattoo design to the original armor piece it was based on to not cause any confusion. 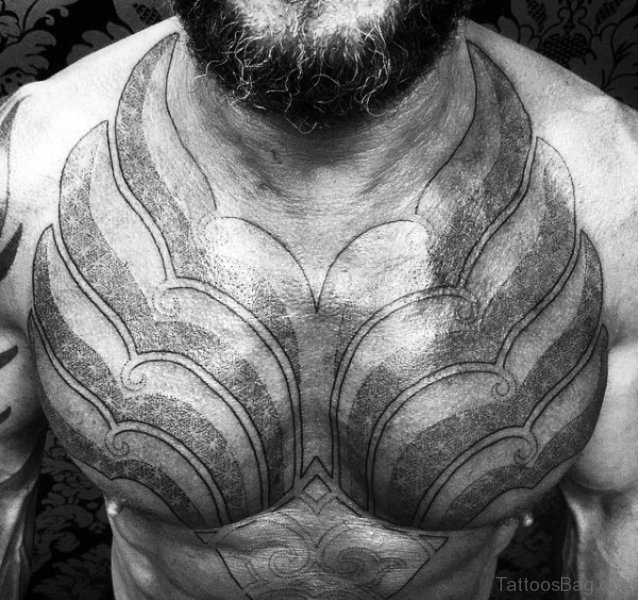 3. A Celtic-inspired chest plate armor tattoo with a Celtic dragon as its centerpiece. 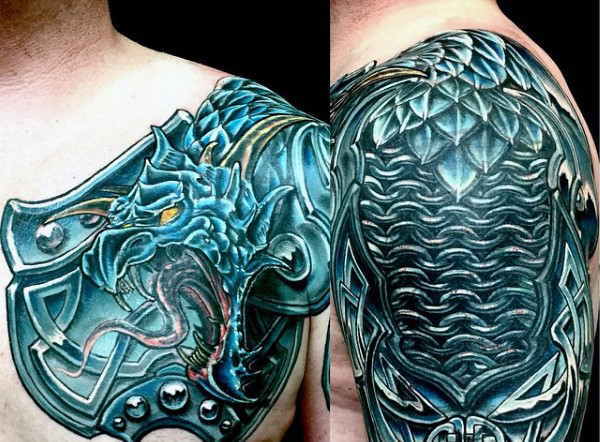 4. A chainmail breastplate armor tattoo with a simple coat-of-arms. 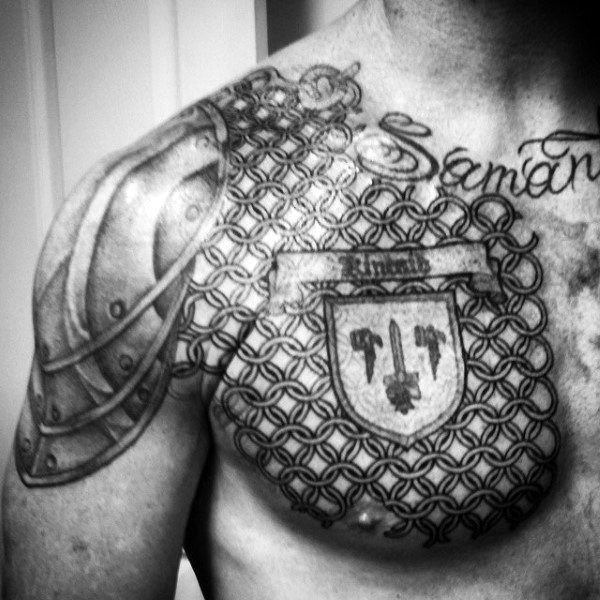 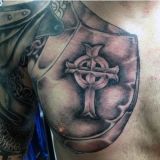 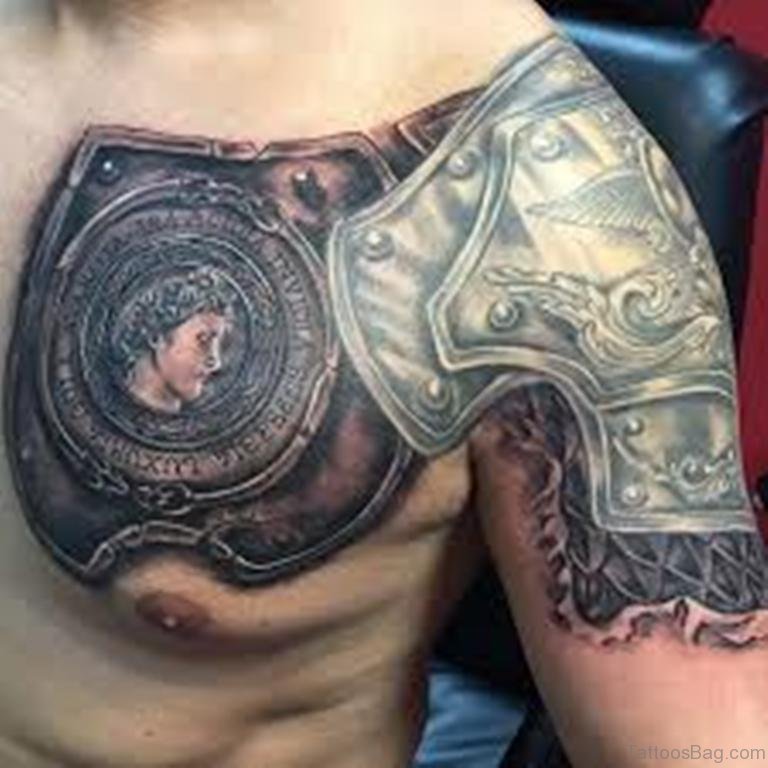 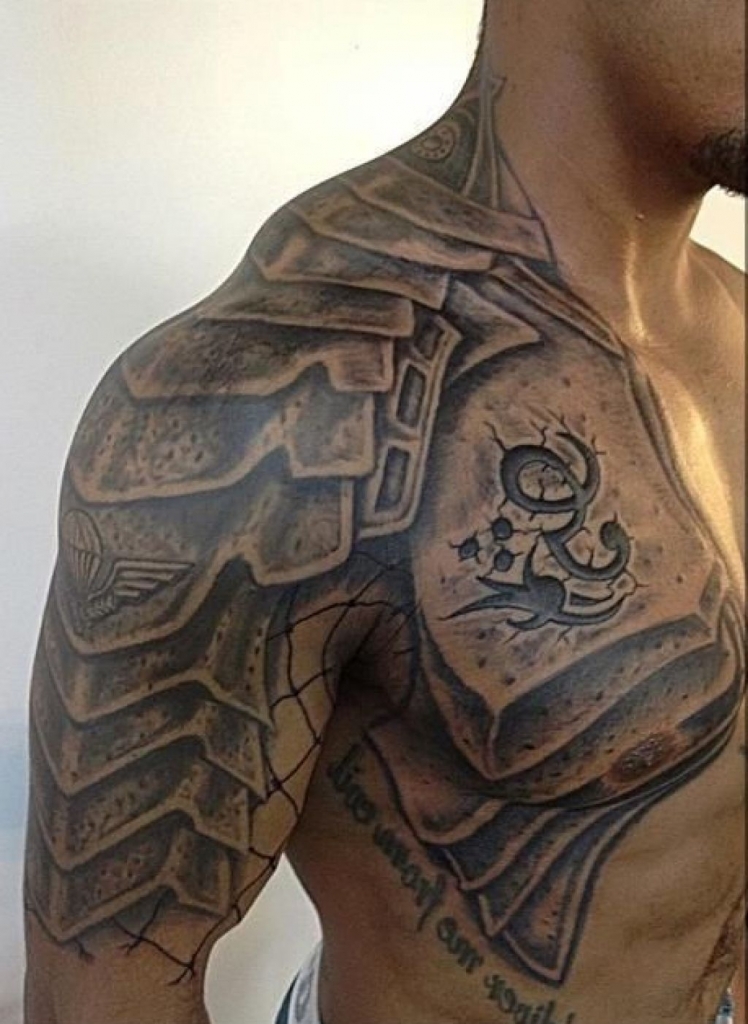 8. A Viking-inspired chest plate tattoo with the Valknut symbol. 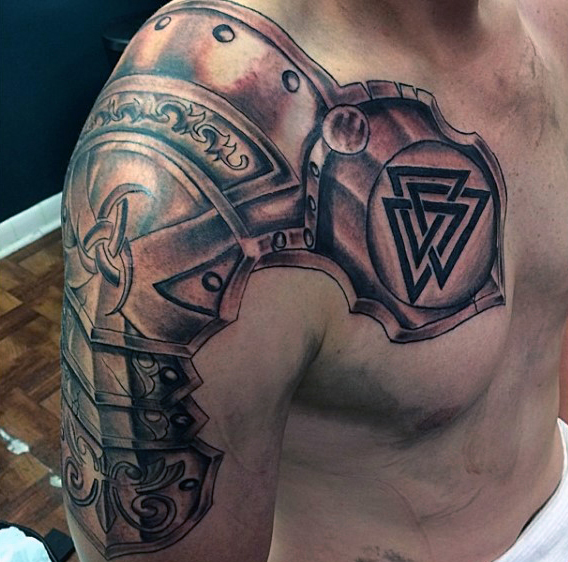 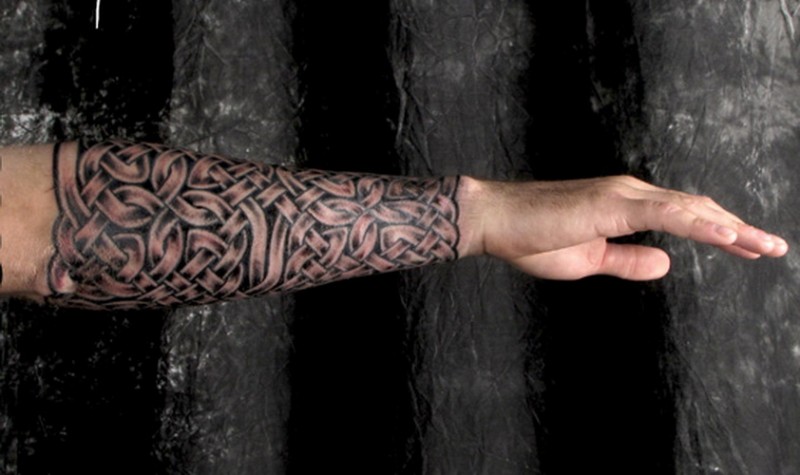 2. An Avengers-themed gauntlet armor tattoo featuring the gauntlet of Thanos. 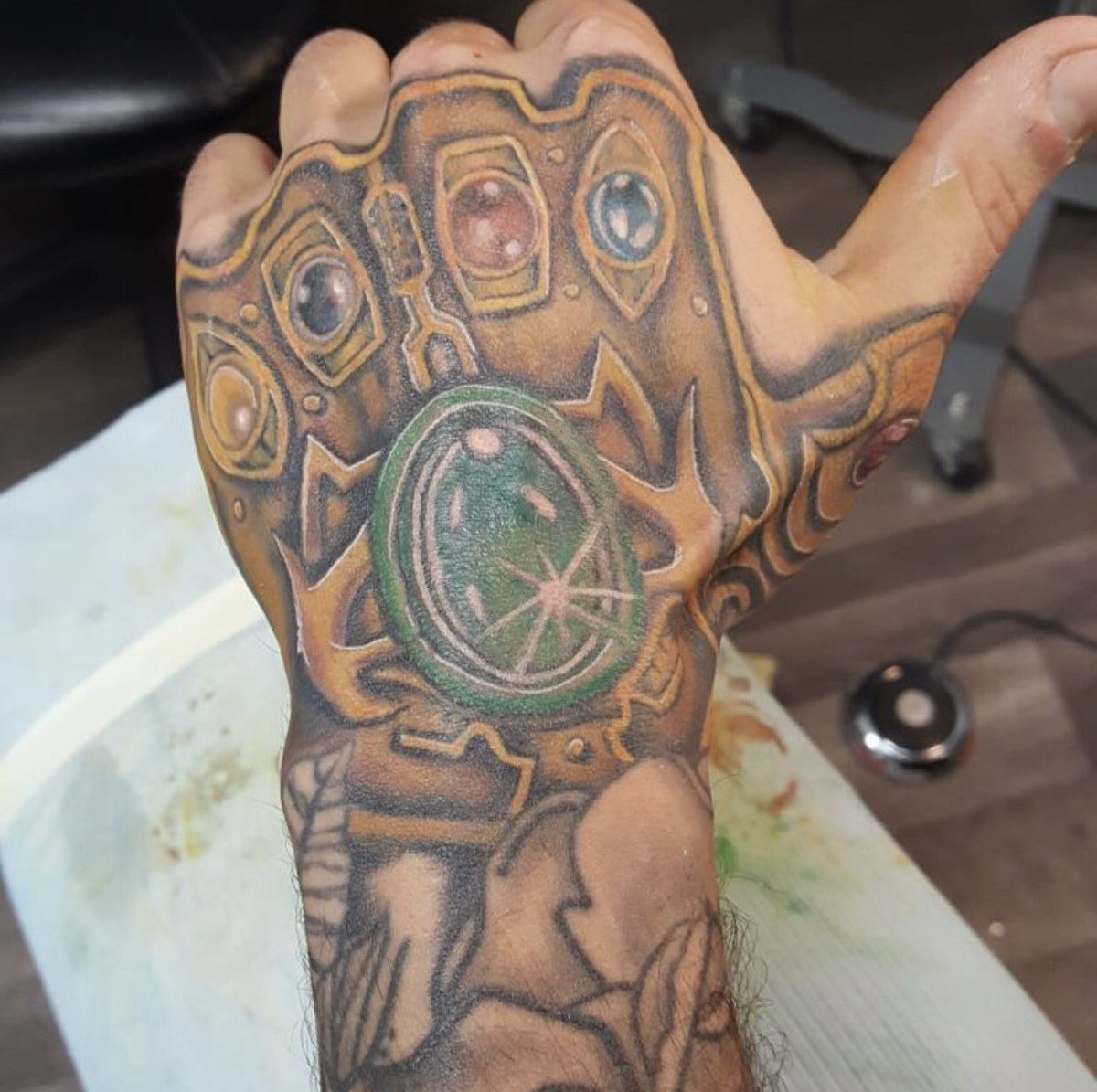 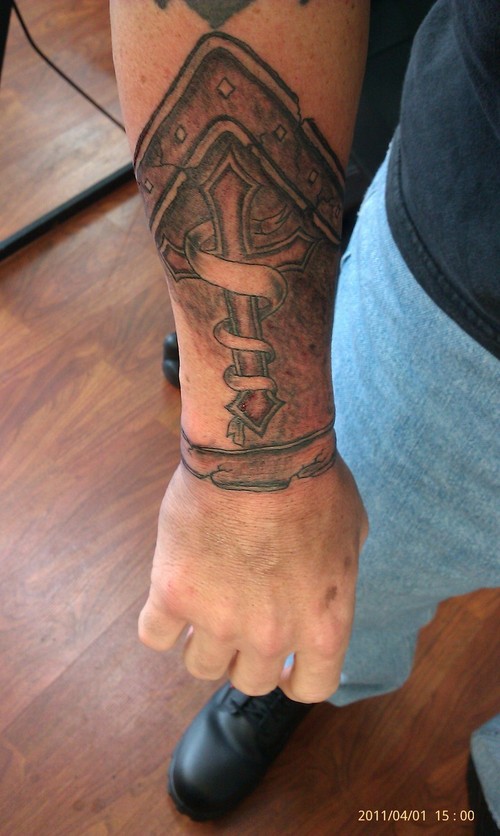 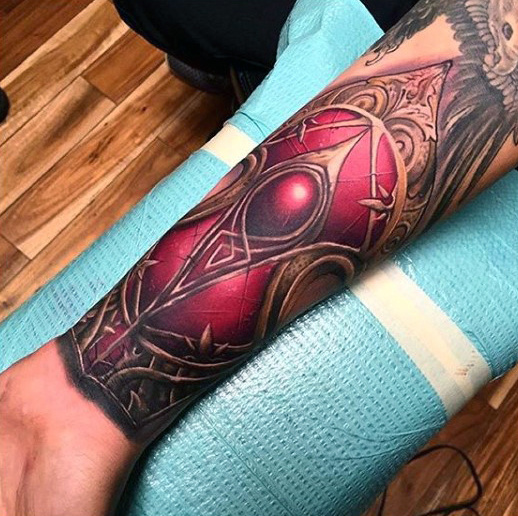 (Greaves are armor pieces that are worn on the legs) 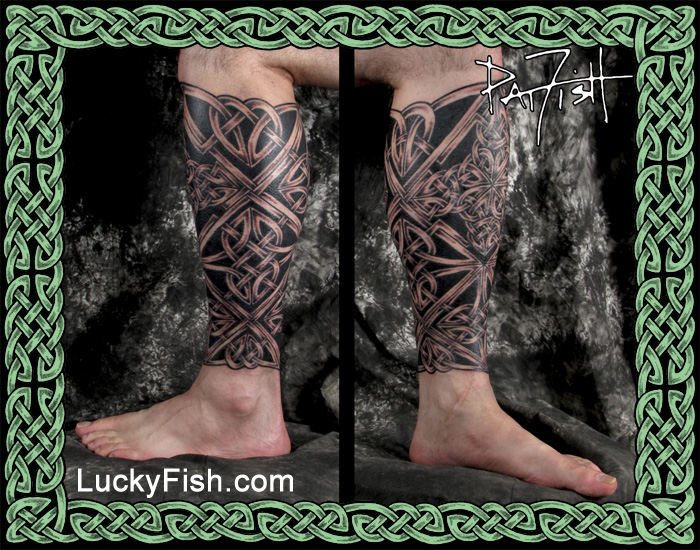 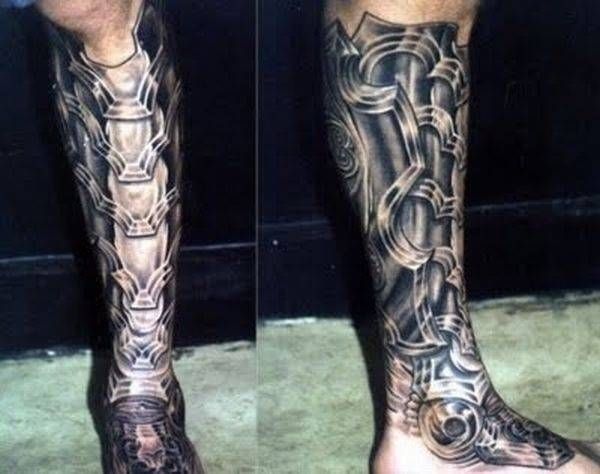 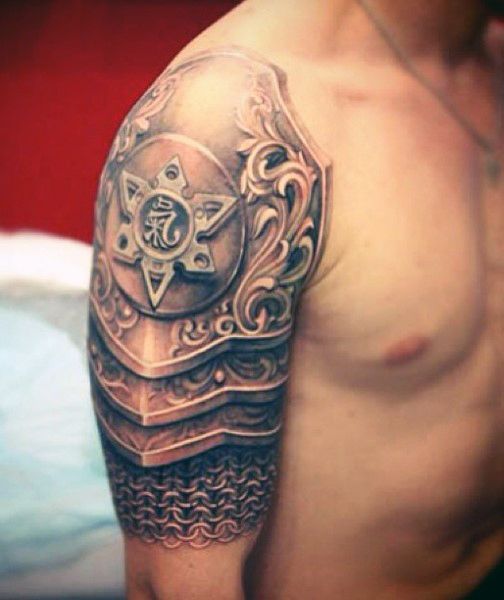 2. A shoulder plate armor tattoo design with iron plates and chainmail in combination. 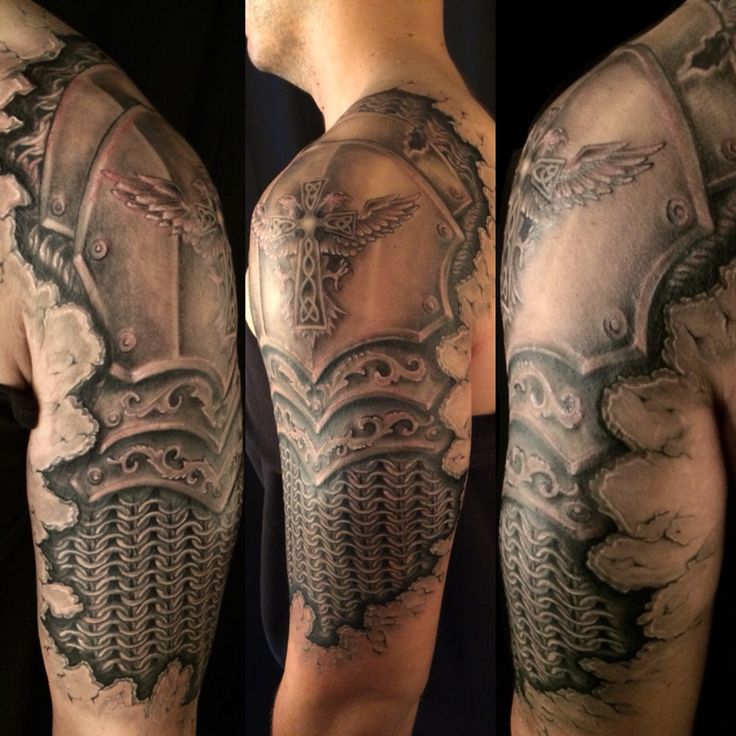 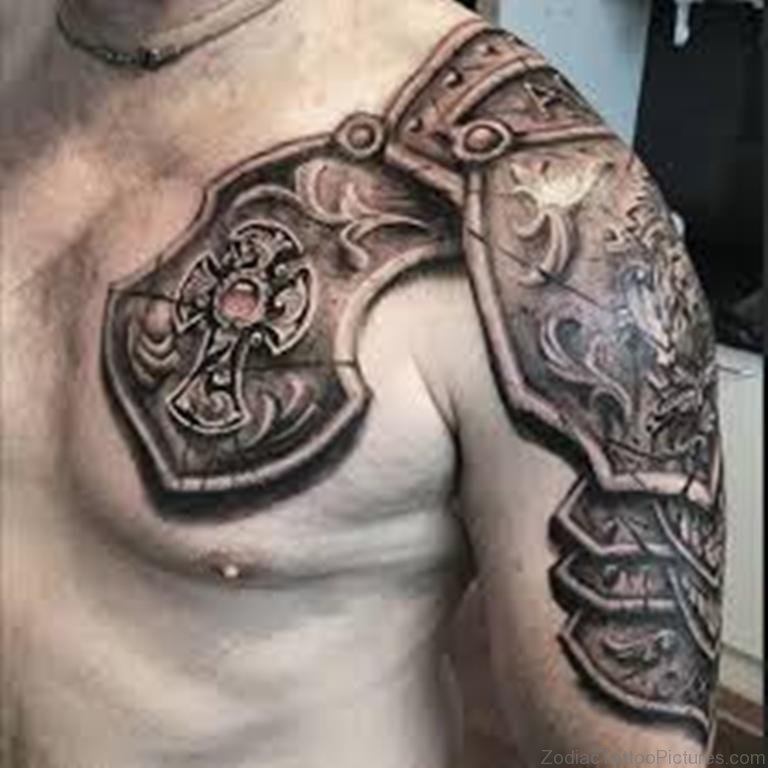 4. A detailed shoulder plate armor tattoo with a heraldic lion face as its centerpiece with a fleur-de-lys as a chest plate extension. 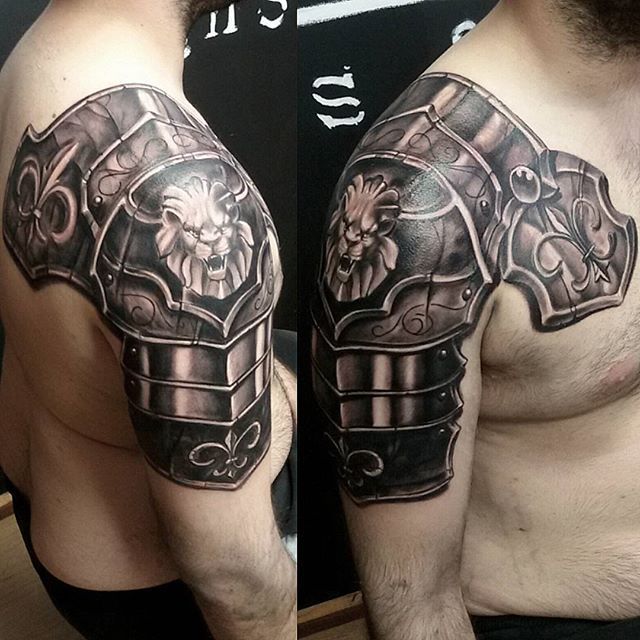 5. a royal-like shoulder plate armor tattoo of a golden lion. 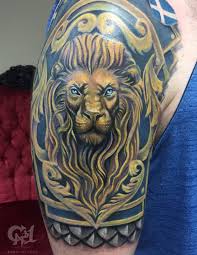 6. A multi-plated shoulder plate armor tattoo with a heraldic lion face as its centerpiece. 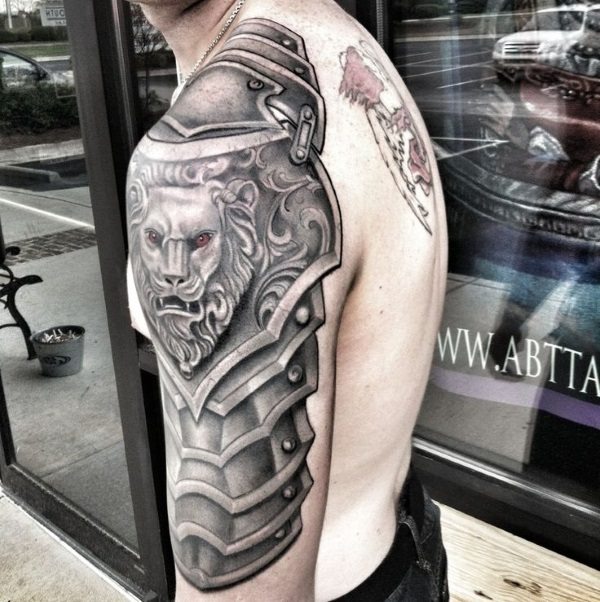 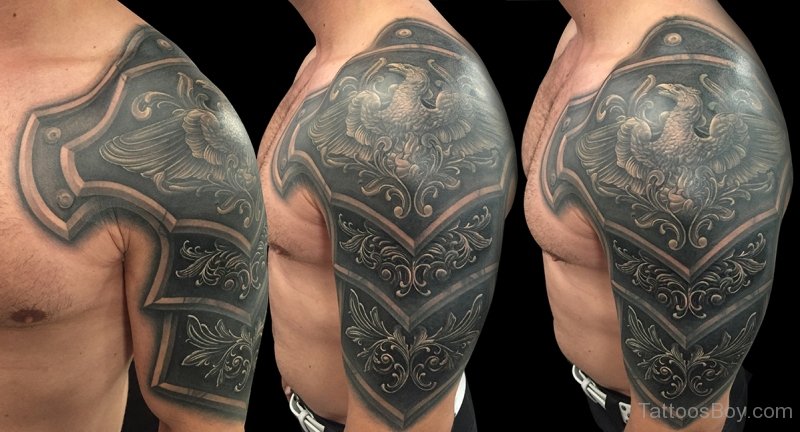 8. A cracked intricate shoulder plate armor tattoo with a heraldic dragon as its focus. 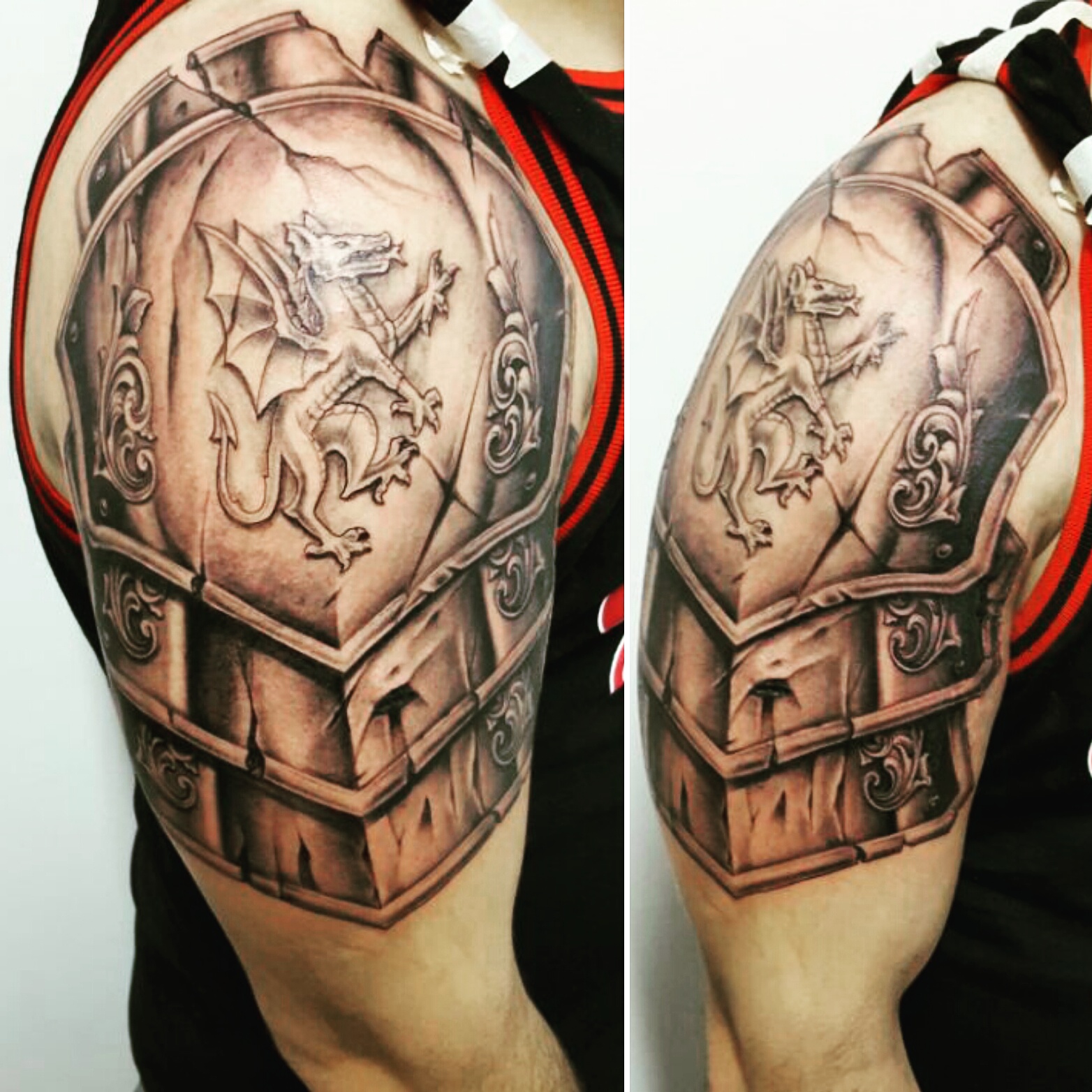 9. An intricate shoulder plate armor tattoo with the Star of David 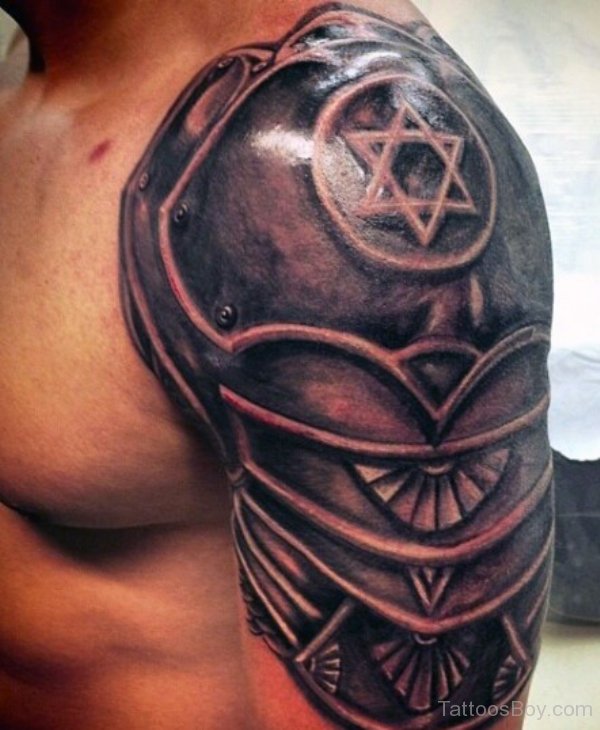 10. An iron-plated shoulder plate armor tattoo with the Latin Cross. 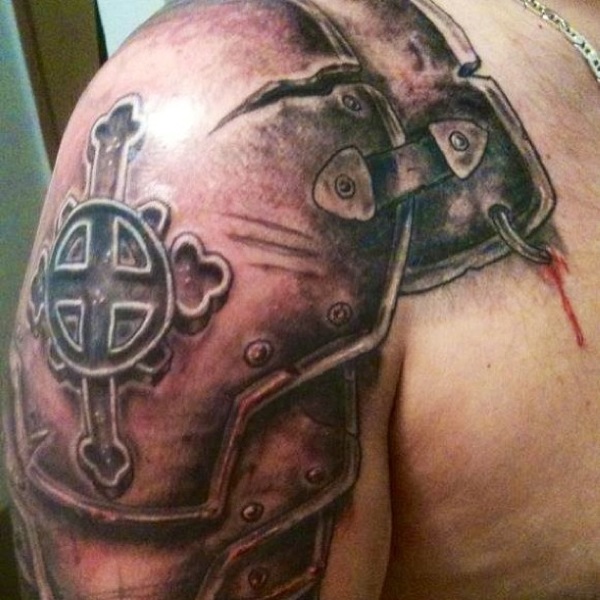 11. A chainmail shoulder plate armor tattoo with a gold angel as its centerpiece. 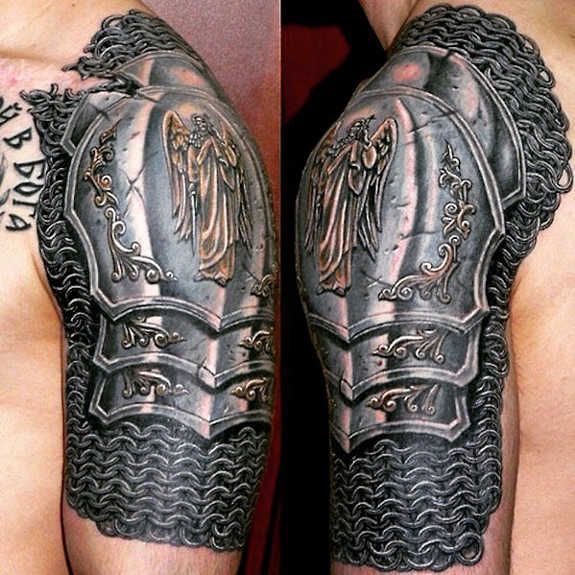