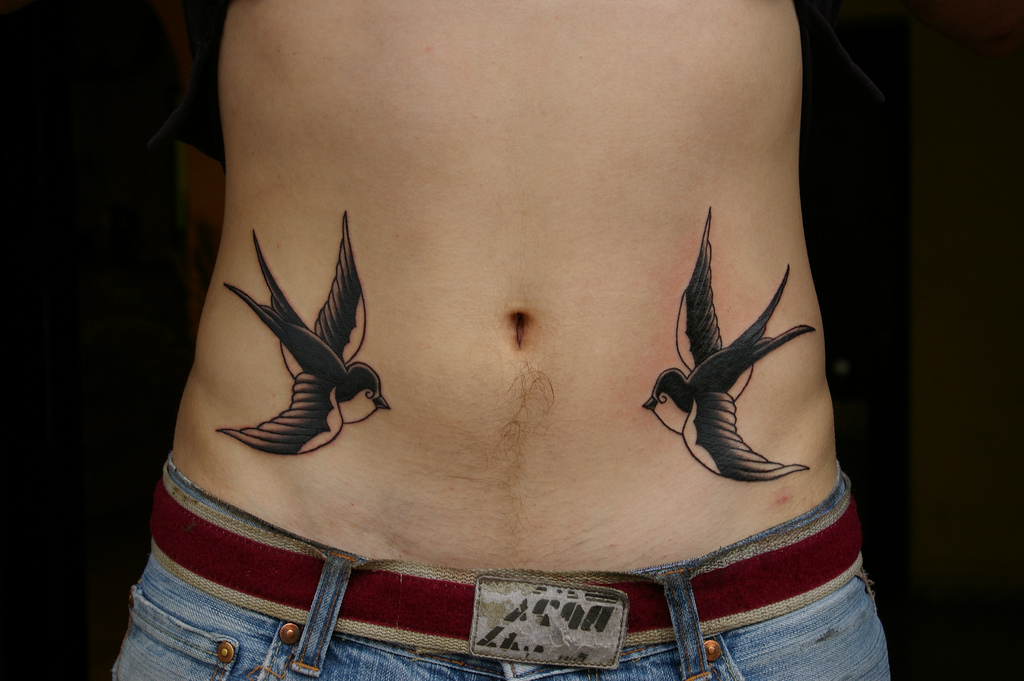 When you look out of your window in the morning, you might probably hear the relaxing chirp of a small but elegant bird by the tree. The melodic chirp is a sound you would always want to hear in the morning. It gives off this rural and peaceful aura around you. The bird that will most likely make this sound you hear is a sparrow. This particular small bird is elegant but also agile at the same time. It has not only captivated our ears with its melodic chirps in the morning but also captured the attention of tattoo artists and enthusiasts across the globe. Our captivation has resulted in one of the most elegant bird tattoo designs known in the industry, the sparrow tattoo.

In this article, we will provide you a rich background on sparrow tattoo designs. We will be showing you images of beautiful sparrow tattoos we have seen on the web while also discussing the sparrow, its meaning, and the perfect body placement for the tattoo.

What Is A Sparrow?

Sparrows are small, plump, brown and grey birds with short tails and stubby, powerful beaks. (source: www.wikipedia.org)They are found across all continents with the exception of Antarctica with species varying from one place to the other but these variations of species can be very minute and most often unnoticeable to us non-experts.

This small bird originates from North Africa, but it has been successfully introduced to North America, Europe, Asia, Australia and New Zealand. Sparrow, unlike many other birds, cannot be found in forests and deserts. It prefers life close to human settlements, including both urban and rural areas. The number of sparrows decreased dramatically in the last couple of years for unknown reasons. Three quarters of sparrows disappeared from the London between 1994 and 2000. Due to the fast decline in numbers of sparrows, this bird is listed as threatened (nearly endangered).

1. Males and females can be distinguished by the feather coloration: males have reddish backs and black bib, while females have brown backs with stripes.

2. Sparrows are carnivores (meat-eaters) by nature, but they have changed their eating habits when they learned to live close to people. Sparrows primarily eat moths and other small insects, but they can also eat seed, berries, and fruit.

3. One of the reasons why sparrows adapted to the life in human settlements is the constant supply of food. Sparrows easily learned to eat “served food” when people started to build bird feeders.

4. Sparrows are monogamous meaning they will only have one partner for life.

5. The main character of Pirates of the Caribbean, Jack Sparrow, was named after this bird after being seen by Captain Salazar on top of the mast of his ship.

What Is The Meaning Of A Sparrow Tattoo?

This little bird has been associated with many meanings. One such meaning is that they symbolize an outgoing personality. Sparrows are social creatures which means that they like to socialize with other birds and travel in flocks. This can also be attributed to sparrow tattoos.

Another meaning is loyalty. Sparrows are perceived as one of the only few animals that are monogamous. Having a sparrow tattoo means that you are loyal to your partner to the very end.

Sailors have sparrows be tattooed on their skin because it symbolizes hope. During the days of old sea navigation, birds, especially sparrows mean that the ship they are in is close to land and since sparrows only live near humans, the sailors are near civilization. This meaning has also gained traction to other people as well.

Where Can I Place My Sparrow Tattoo?

Since the bird in question is small, sparrow tattoos are very flexible when it comes to body placement. Their small size and small skin footprint mean that they can even be tattooed in the smallest of spaces without any problems. If you are looking for common places to have this tattoo be inked, the usual places would be the limbs (shoulders, arms, sleeves, thighs, and legs area) and chest areas of the body.

Sparrow tattoo designs have been quite prevalent in bird tattoo designs and it resulted in a lot of variations when it comes to design. In this day and age, sparrows are often rendered as a realistic image of the real thing or an abstract image of the bird. Currently, a neo-traditional approach has been given to sparrow tattoos with raves from artists and enthusiasts alike.

Here are some of the sparrow tattoo designs we have gathered for you to be inspired. 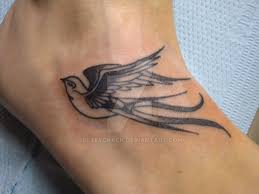 2. A neo-traditional colored arm tattoo of a red sparrow.

3. An blank-ink arm tattoo of a sparrow with an artistic rendition. 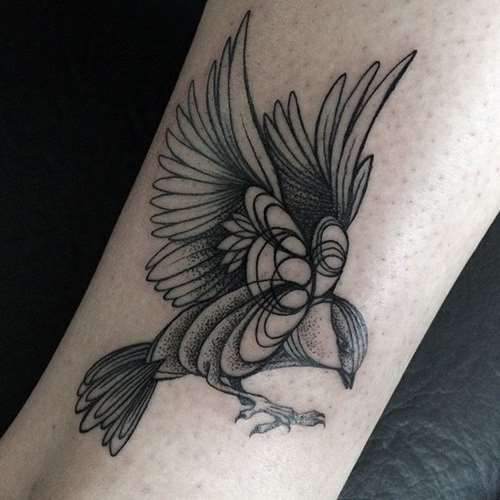 4. A realistic chest tattoo of a sparrow. 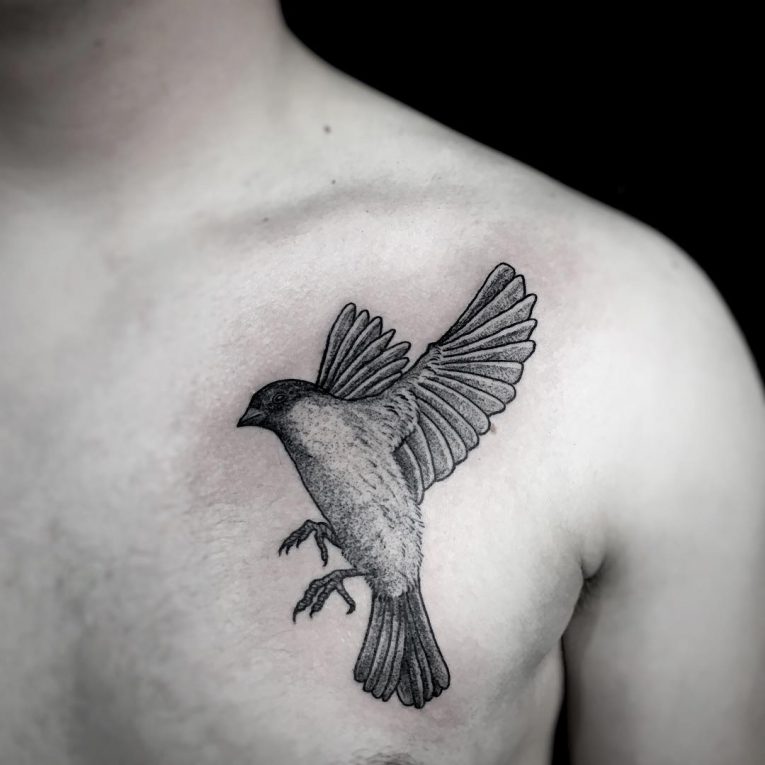 5. A shoulder tattoo of a pair of sparrows with an abstract rendition. 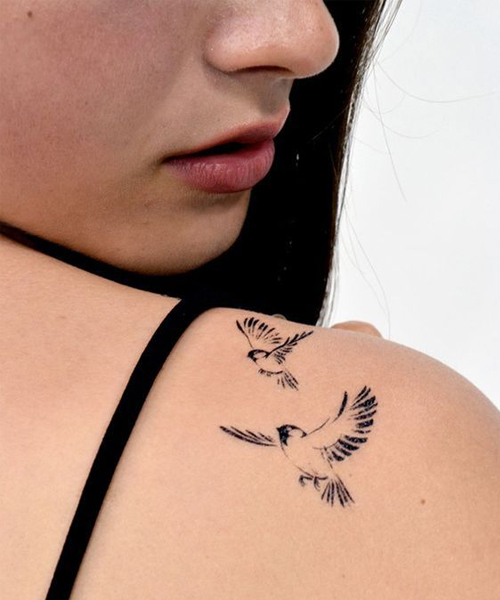 6. A neo-traditional colored tattoo of a sparrow. 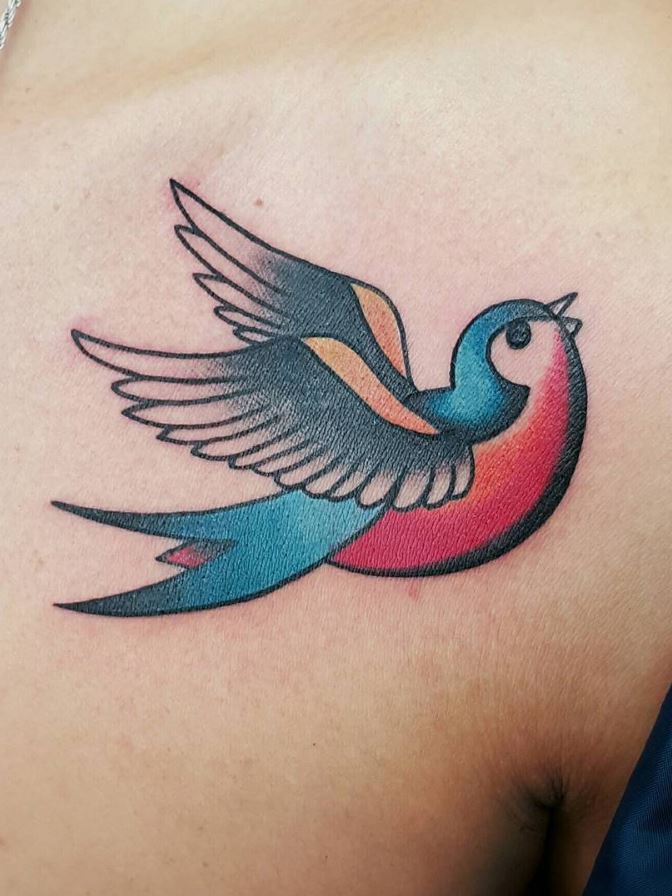 7. A large back tattoo of a flock of sparrows and a dandelion. 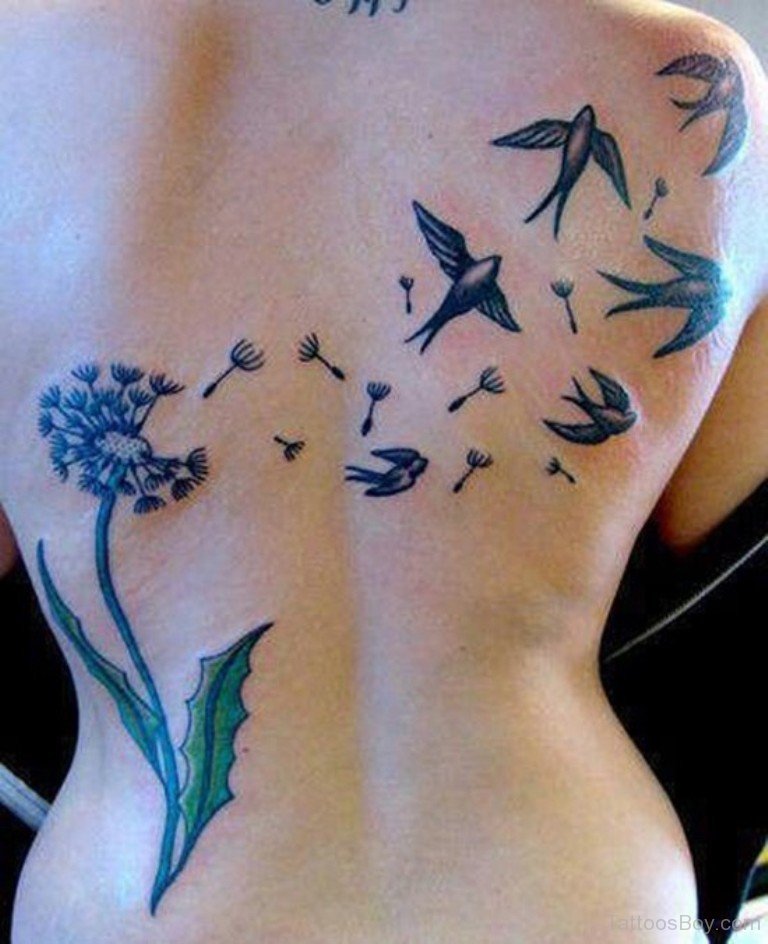 8. A small foot tattoo of a sparrow. 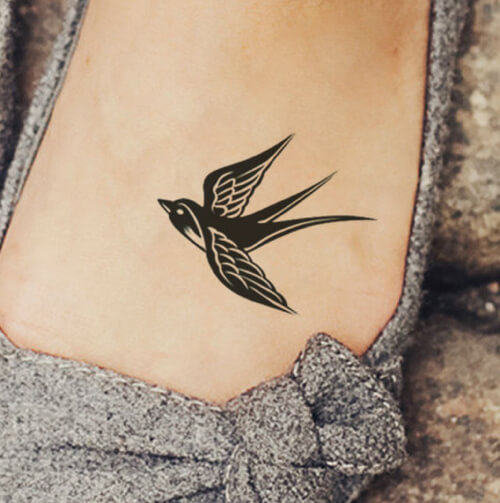 9. A neo-traditional chest tattoo of a sparrow holding a pair of flowers. 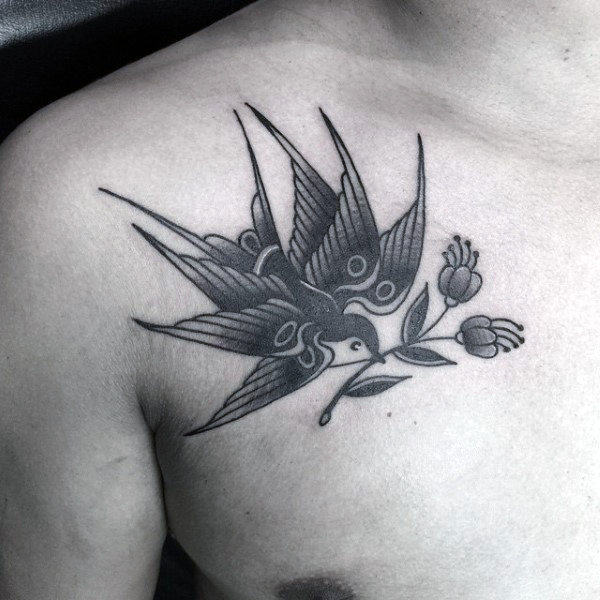 10. A medium-sized colored back tattoo of a yellow sparrow with splashes of black ink as the embellishment. 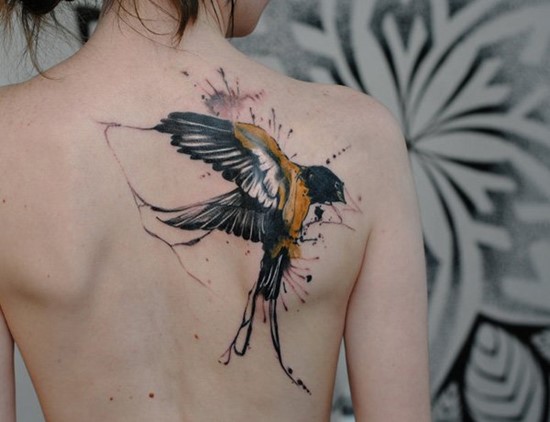 12. A neo-traditional colored chest tattoo of a sparrow with a dagger piercing through it. 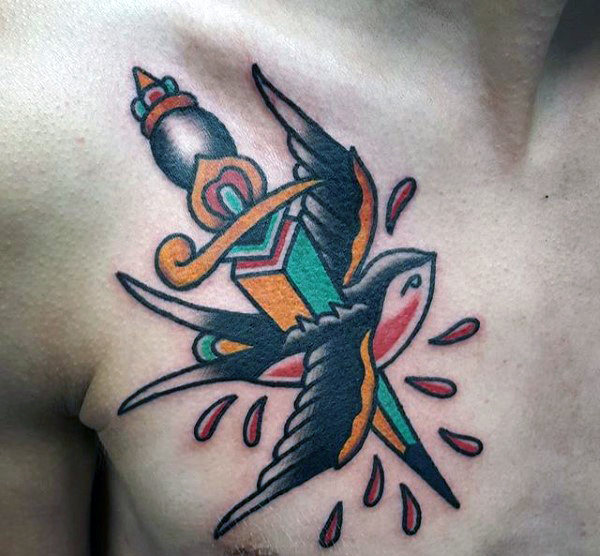 13. A large realistic leg tattoo of a sparrow. 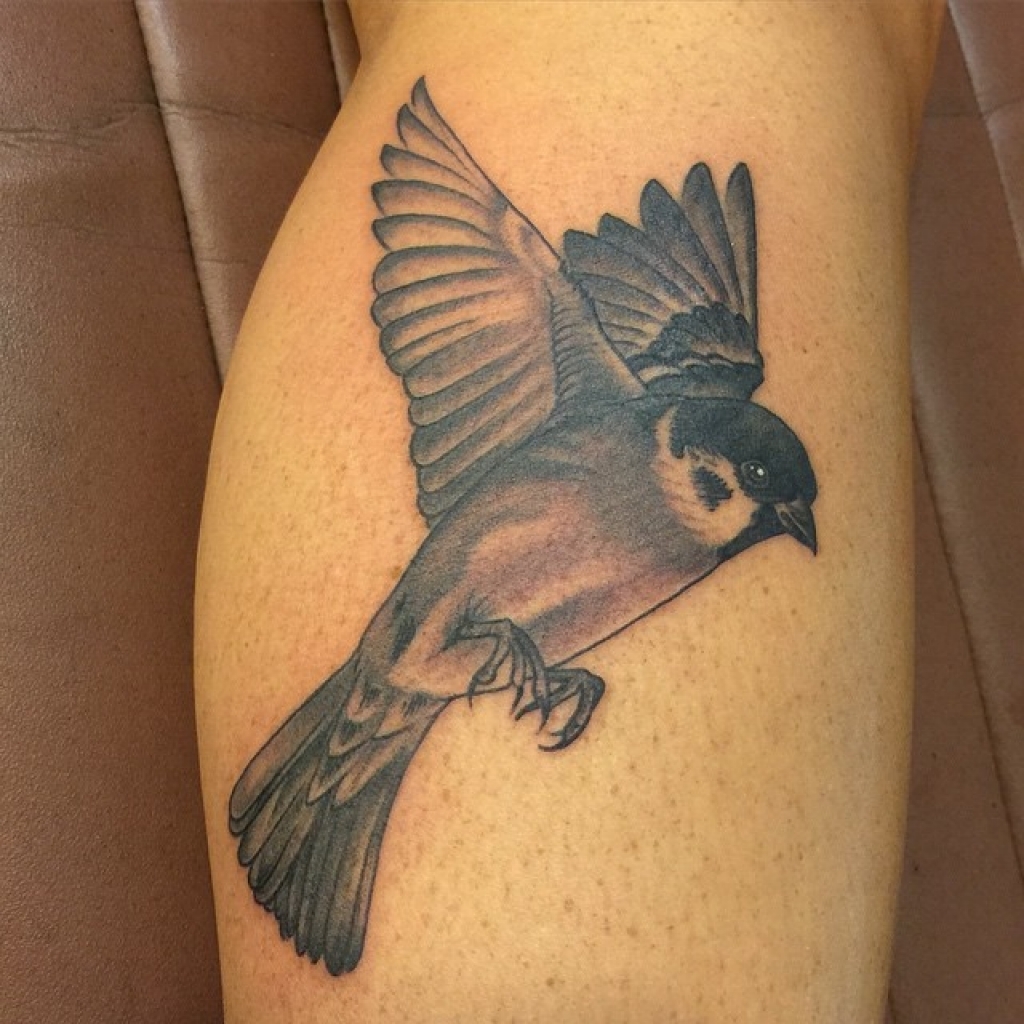 14. An intricate neo-traditional colored hand tattoo of a sparrow with flower details. 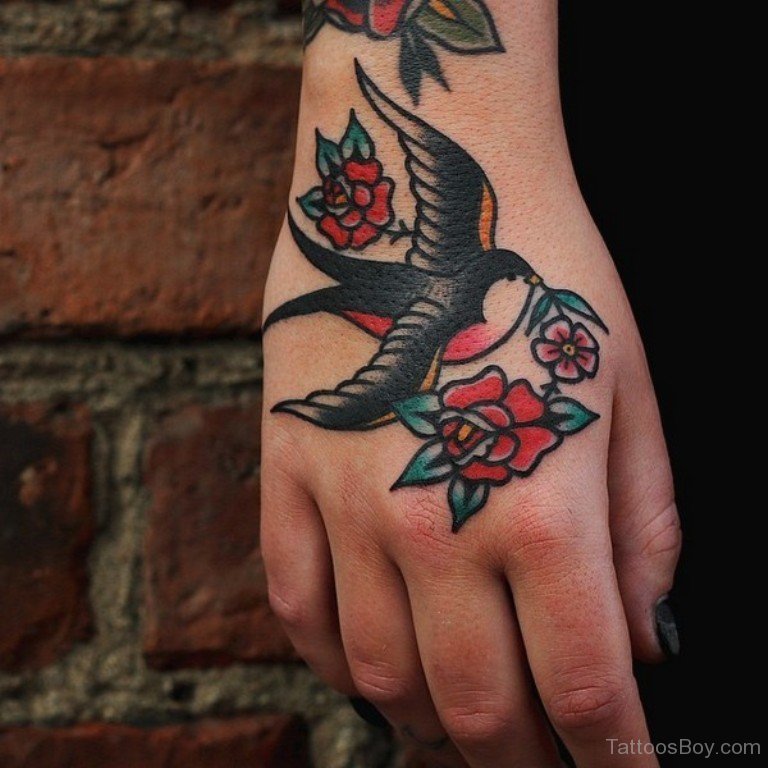 15. A leg tattoo of a sparrow perched on a twig in drawing-like design. 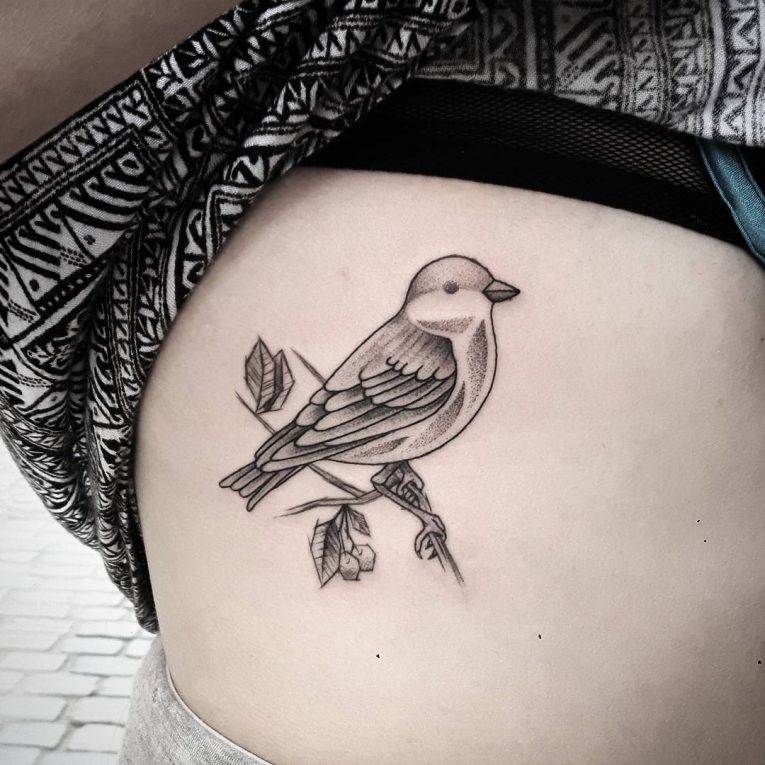 16. A watercolor back tattoo of a sparrow holding a single wheat. 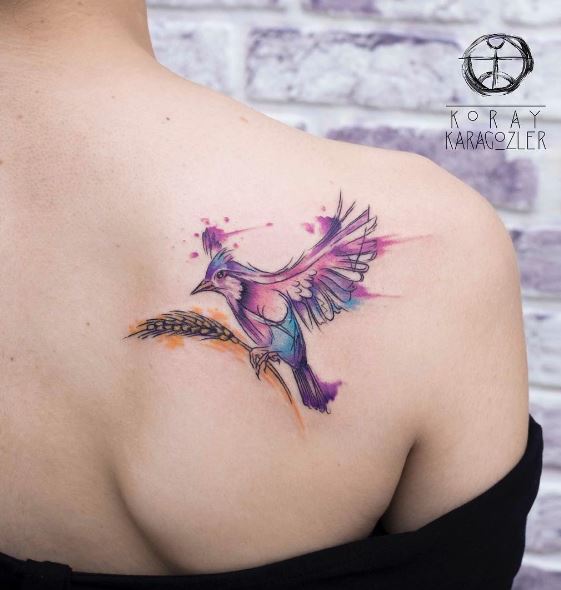 17. A realistic chest tattoo of a sparrow in flight. 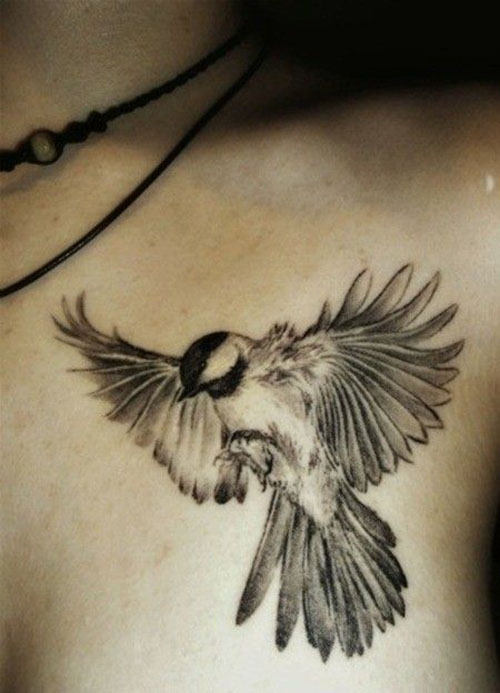 18. Another realistic chest tattoo of a sparrow in flight. 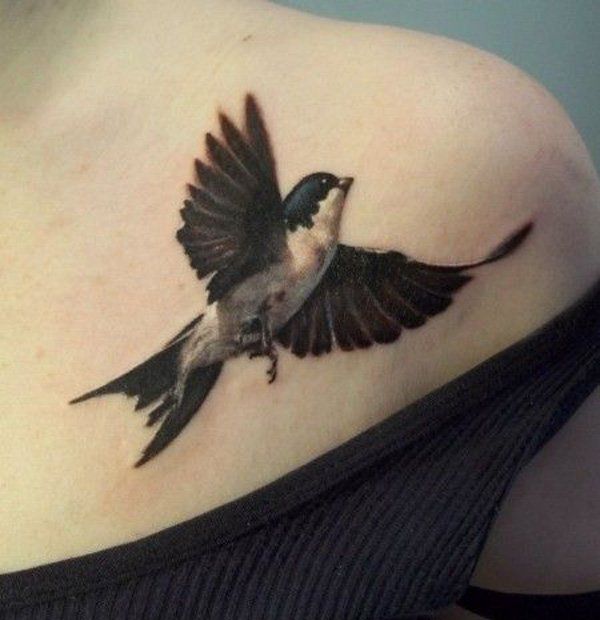 19. A monochromatic back shoulder tattoo of a sparrow. 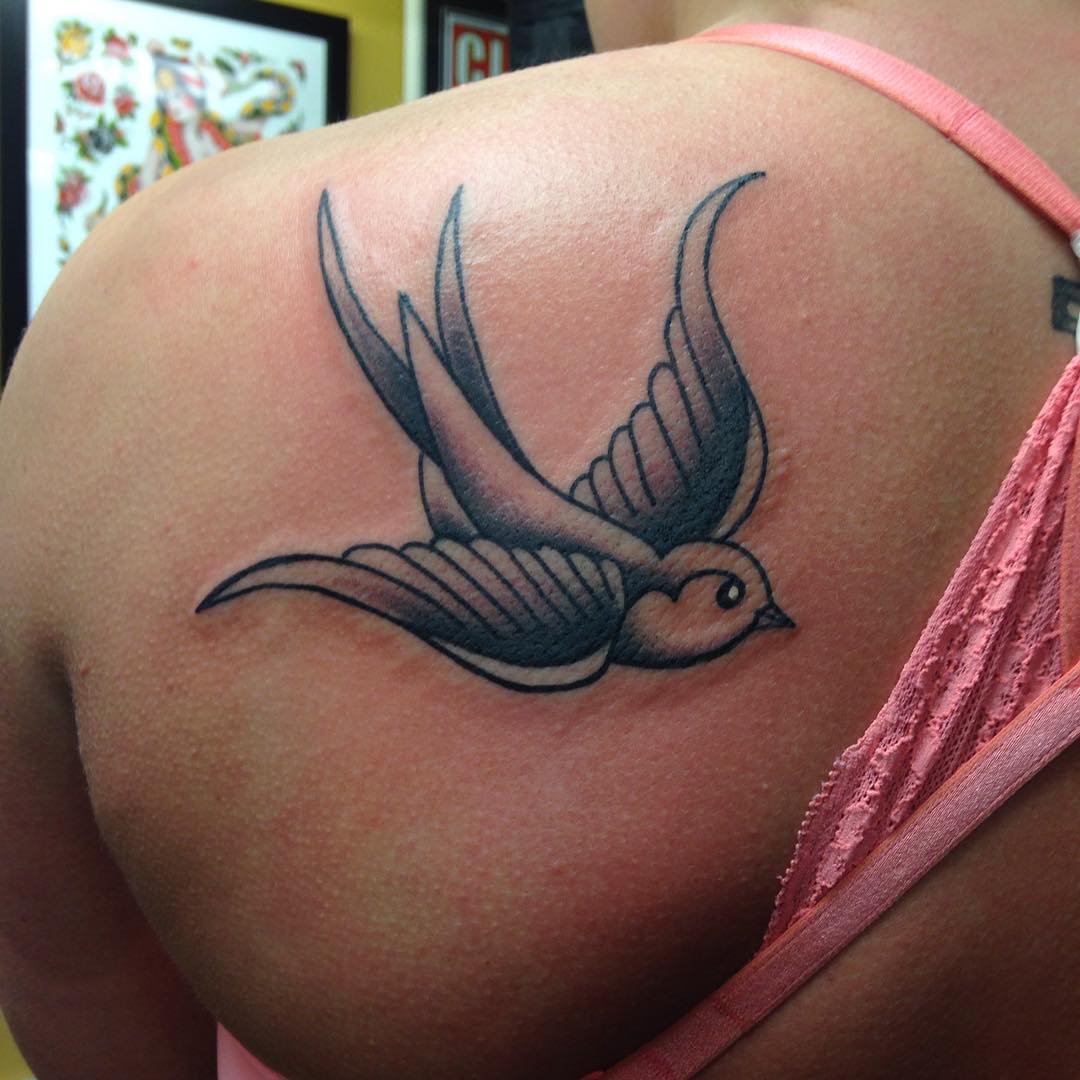 20. A realistic side tattoo of a sparrow about to perch a branch. 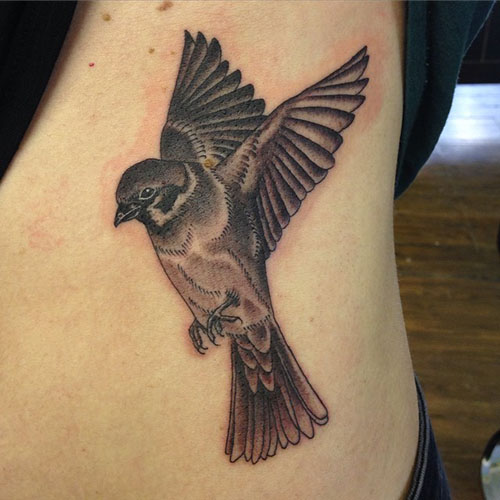 21. An artistic leg tattoo of a sparrow at sea during sunset. 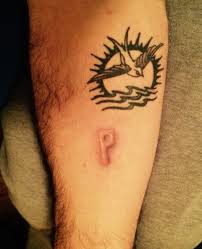 22. A small chest tattoo of a sparrow in flight. 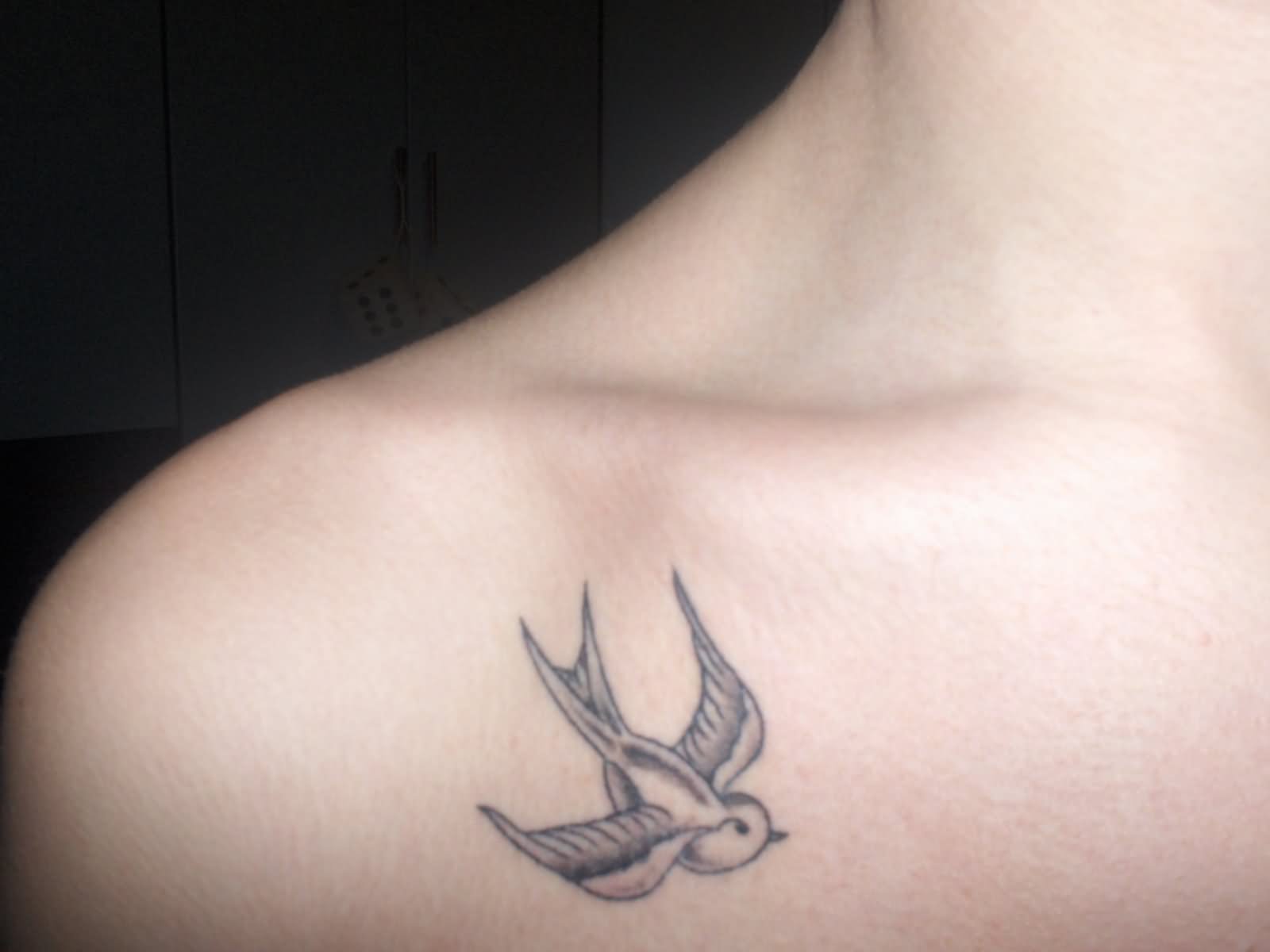 23. A back tattoo of two sparrows with names of the couple underneath each sparrow. 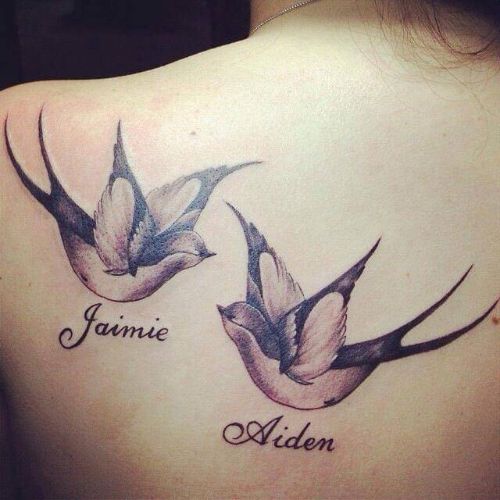 24. A neo-traditional colored back tattoo of a pair of sparrows. 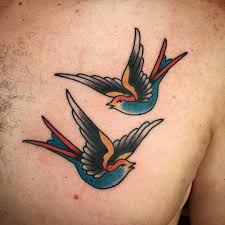 25. A realistic colored leg tattoo of a sparrow. 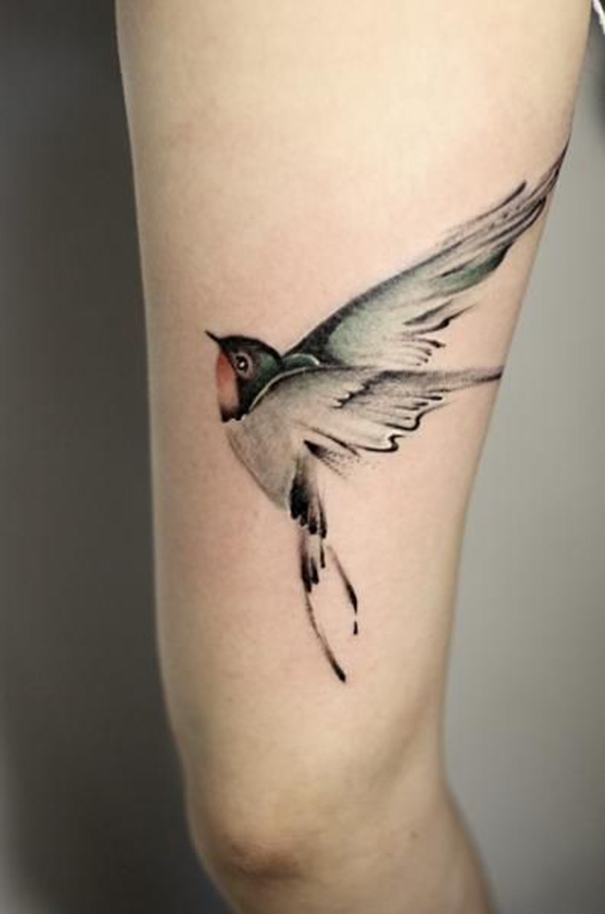 […] Sparrow tattoo designs have been quite prevalent in bird tattoo designs and it resulted in a lot of variations when it comes to design. In this day and age, sparrows are often rendered as a realistic image of the real thing or an abstract image of the bird. Currently, a neo-traditional approach has been given to sparrow tattoos with raves from artists and enthusiasts alike. […]