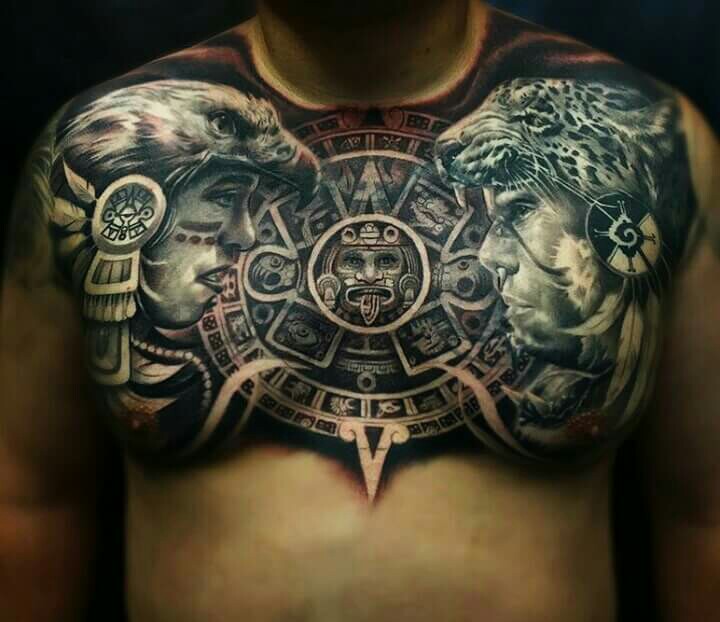 The Aztecs have been the dominant culture of pre-Columbian America. Their influence stretched from the Mexican Pacific Coast up to the Caribbean and to think that they started as a Lilliputian city-state at the shore of a small lake, their mere influence can be considered a huge success even in today’s standards. Their cultural influence even exists until today and while the world continues to evolve, so to the culture they have left after their demise. Aztec art has been a dominant art form in various art media which is why it is no wonder that Aztec art has also captured the body art industry with Aztec tattoo designs.

Here, we will provide you a rich gallery of Aztec tattoo designs while discussing the history of the Aztecs and the meaning behind famous Aztec symbols that are ideal to be inked on your body.

The Aztecs: A Brief History

The Aztecs were established in 1430 when the alliance of three early-Mexican city-states was formed. From this alliance, they made a city floating within the lake and named it Tenochtitlan which means “Among the prickly pear rocks”, a divine sign that the people saw as their city’s future location. From this city, they expanded in all directions and alongside their dominion’s expansion, so too the city’s footprint.

Tenochtitlan has been considered by the Spanish Conquistadors to be the “Venice of the New World” because of its setting and the way it was built. Various canals dotted the city guiding its growth. The city was filled with pyramids and palaces by the Aztec Emperor with a large central plaza and temple that would soar against the low-lying buildings of the city. Its beauty was unparalleled as recounted by a Spanish Conquistador.

The Aztecs fell to the Spaniards when Cortes lay siege to the city. The city’s population was subject to famine and diseases their body was not familiar with. In 75 days, the Aztecs were no more so does their beautiful city of Tenochtitlan as the Spaniards level the city to make their own city with Spanish influences.

Though the Aztec Civilization was reduced to rubble, their culture still lives on to this day and it stands as a testament to their superiority across Central America.

Aztec Art has become a famous tattoo design due to its various symbolisms. The Aztecs used pictography as a way of writing which resulted in a rich resource of tattoo designs for artists and enthusiasts. Though their way of living and writing died with their civilization, the imagery they left still lives on to various art media including body art and tattoos.

Here are some of the most famous Aztec symbols we saw on the web that can be applied as a tattoo design. (Source: www.wikipedia.org)

The Calendar or famously known as the Sun Stone is the most famous artwork produced by the Aztecs. The Sun Stone contains components of old Aztec Mythology wherein the center is depicted as Tonatluh, the central solar deity of Aztec Mythology. Surrounding this central figure are other figures that are highly prominent in Aztec culture. This specific design is said to be the harbinger of several mythical and spiritual properties that would protect the individual who has them.

Want the divine protection of these deities? Here are some of the Aztec tattoo designs we saw on the web that heavily features the Sun Stone.

1. A ruined Aztec Calendar as a sleeve tattoo. 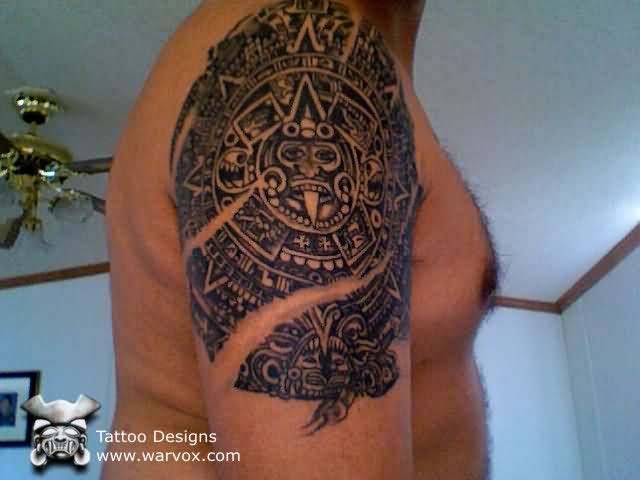 2. A large shoulder tattoo of the Sun Stone. 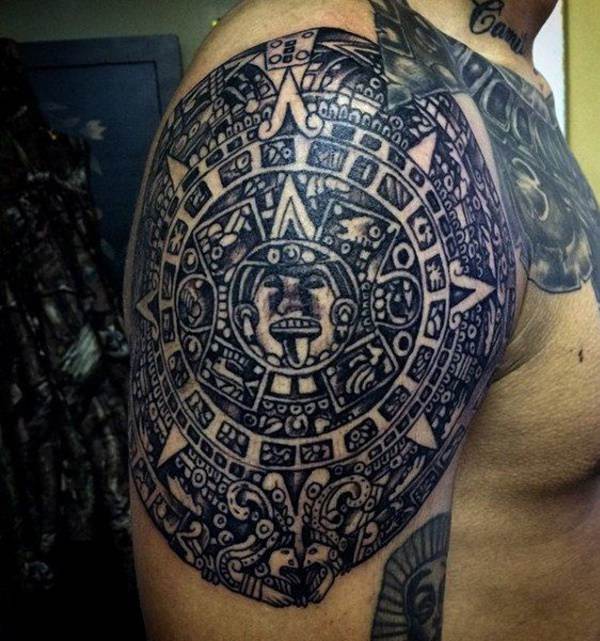 3. A fading-styled leg tattoo of the Aztec calendar. 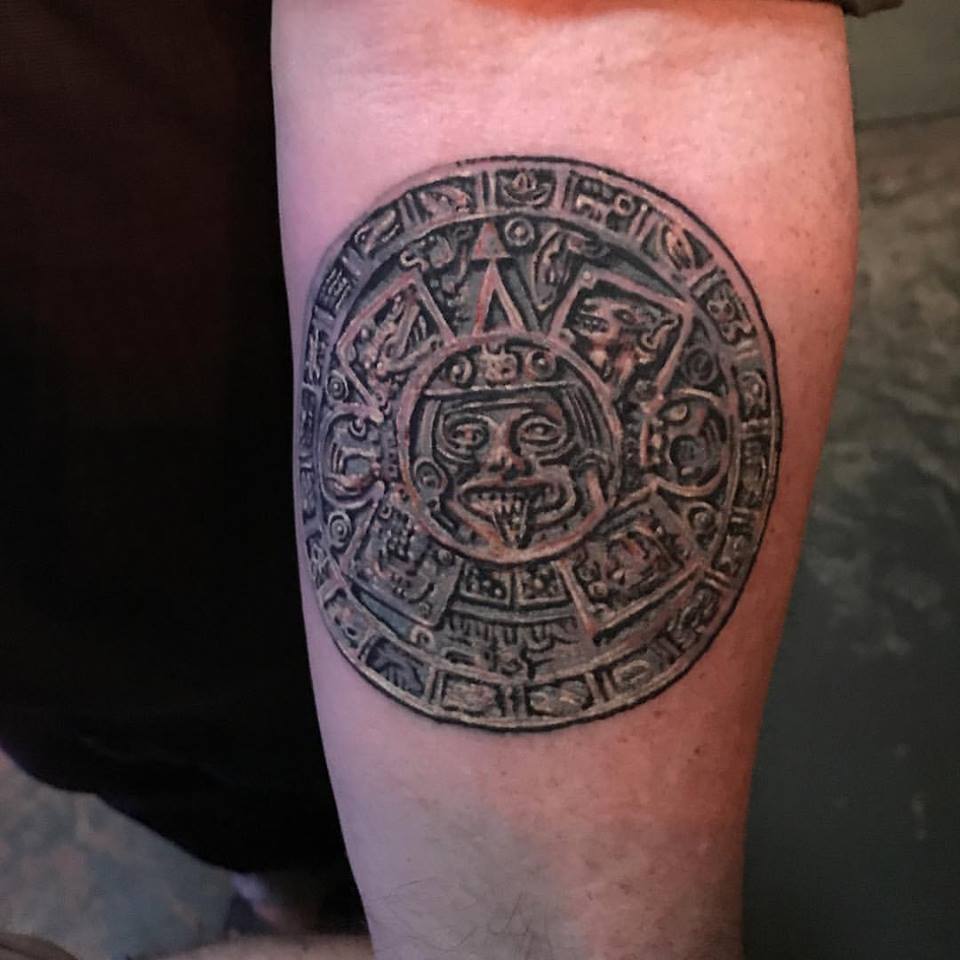 4. A hand tattoo of the Sun Stone’s centerpiece. 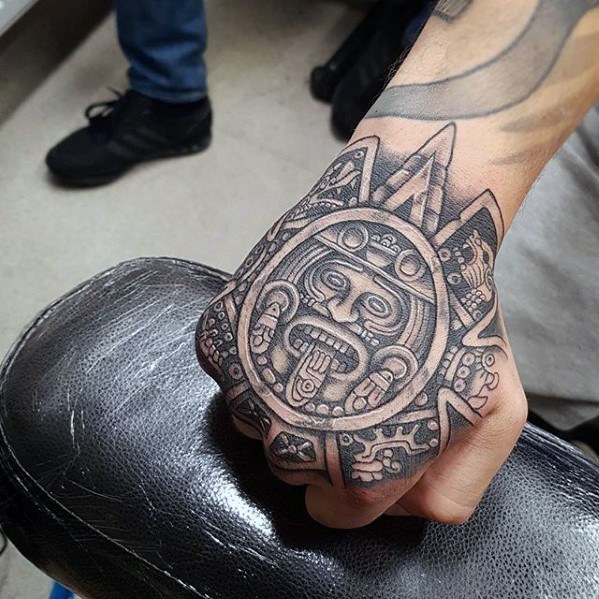 5. A large back tattoo of the Sun Stone. 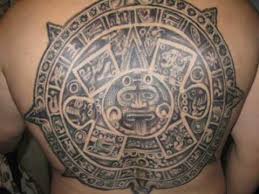 6. A back tattoo of the Aztec Calendar’s centerpiece. 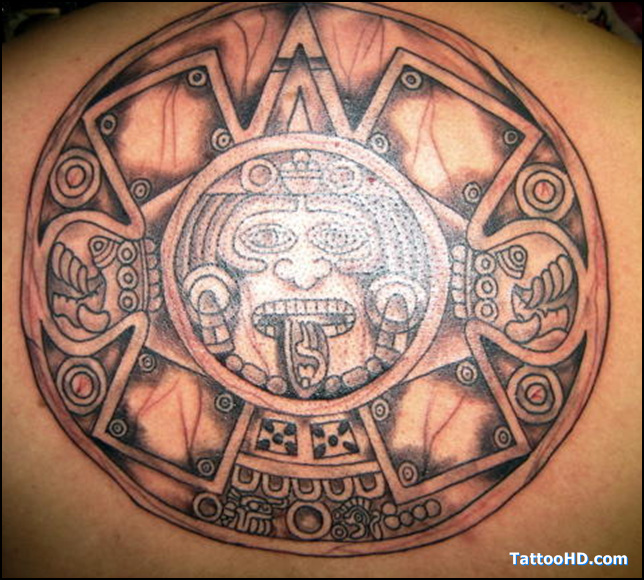 7. A watercolor back tattoo of the Aztec Calendar with other Aztec embellishments. 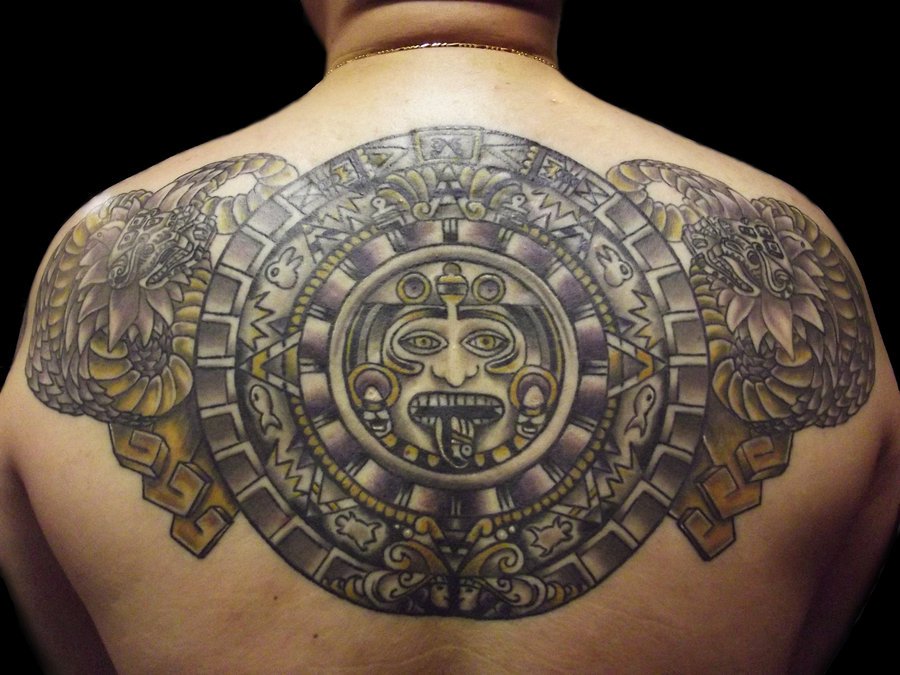 8. A flat chest tattoo of the Aztec Calendar. 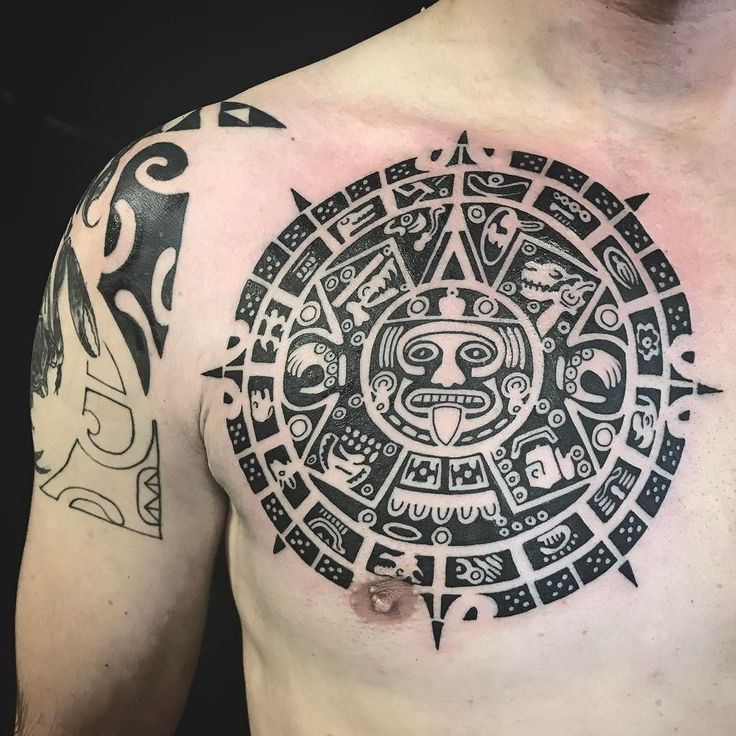 9. A realistic tattoo of the Sun Stone on the chest area. 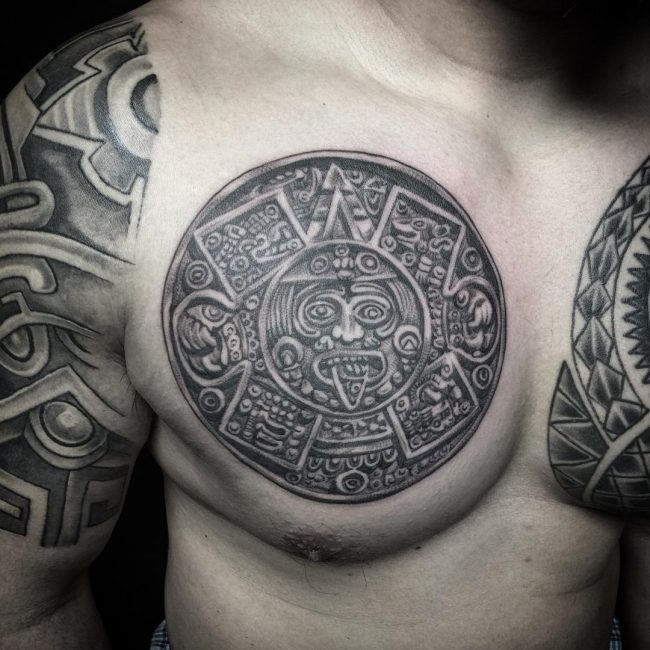 10. A complex Aztec tattoo of the Sun Stone. 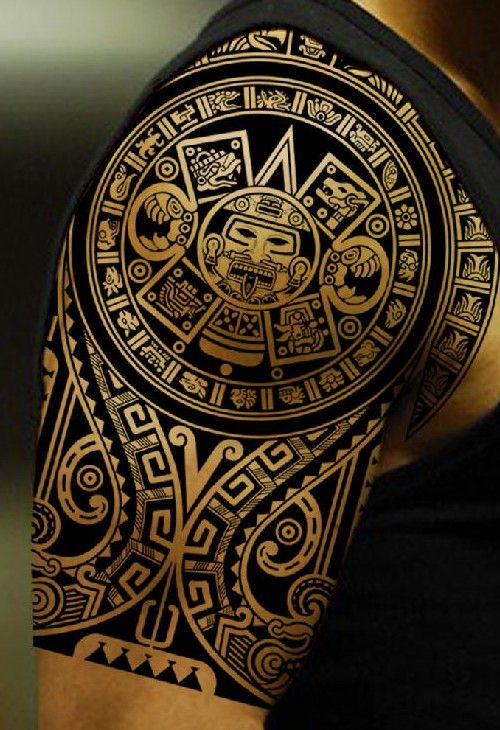 The Eagle is highly regarded in Aztec Culture as the only animal that can look to the sun straight on. Eagle tattoos are often seen on Aztec warriors because the eagle is seen as a symbol of power, strength, and courage. Until today, the eagle’s meaning has not changed and it still holds a significant foothold in the body art industry.

Want to show your courage to other people? Here are some Aztec eagle tattoos we saw on the internet that might inspire your next tattoo idea.

1. A sternum tattoo of an Aztec eagle with modern influences. 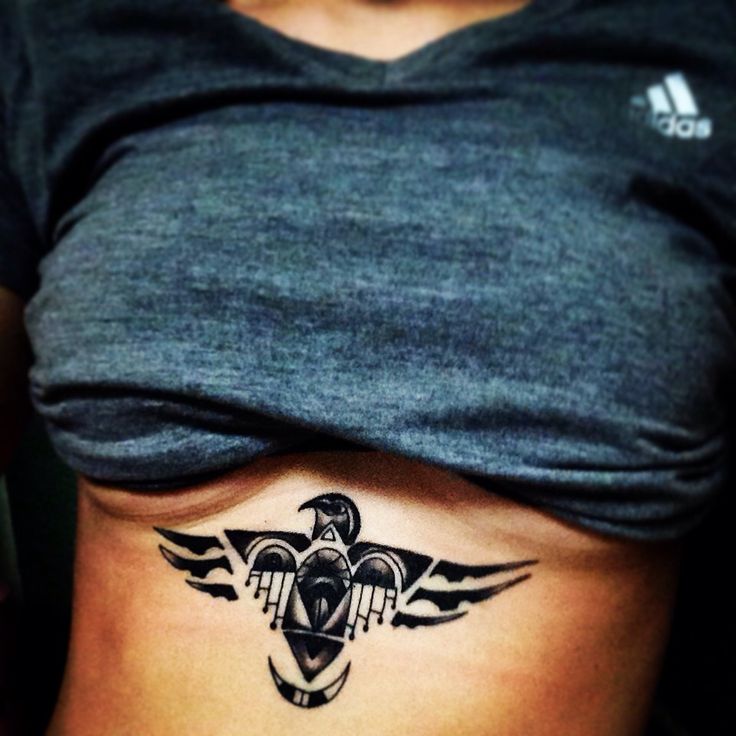 2. A colorful watercolor shoulder blade tattoo of an Aztec eagle. 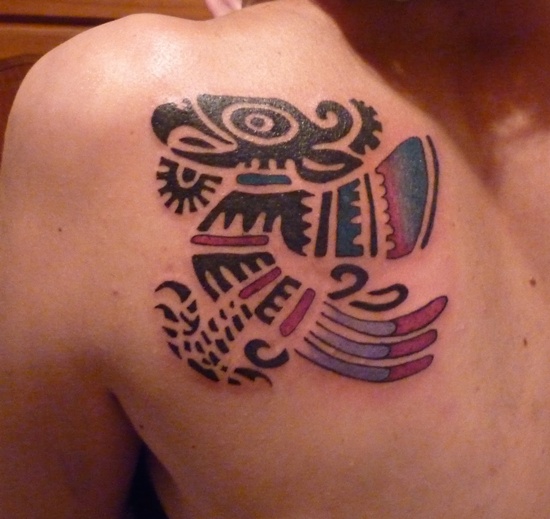 3. A flying Aztec eagle inked on the shoulder blade. 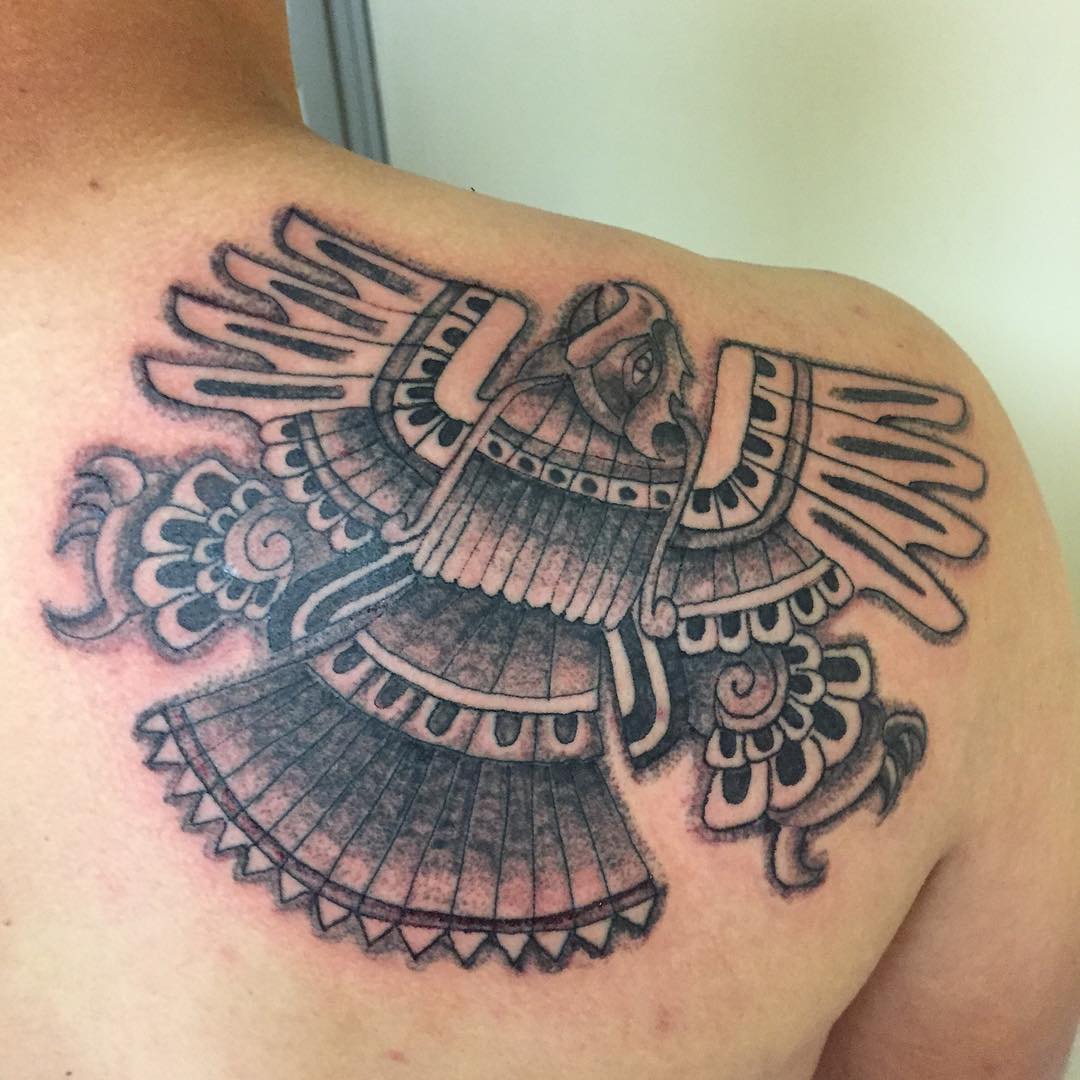 4. A two-headed Aztec eagle tattooed on the leg. 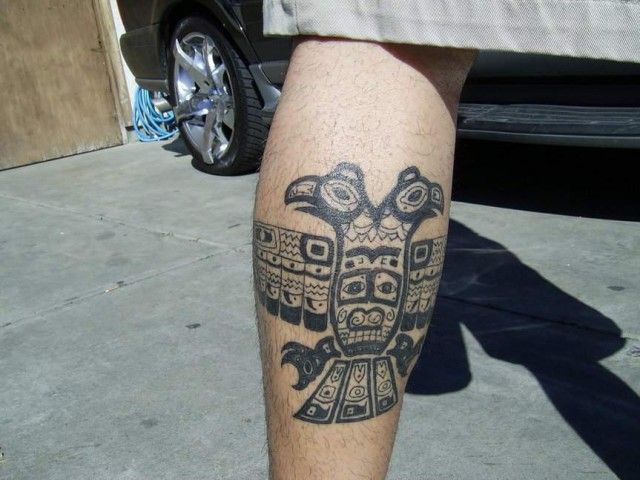 5. The head of an Aztec eagle as a chest tattoo. 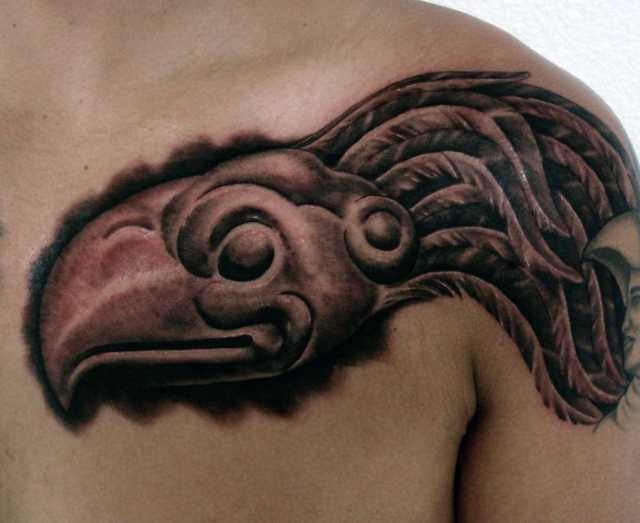 6. A small wrist tattoo of an Aztec eagle. 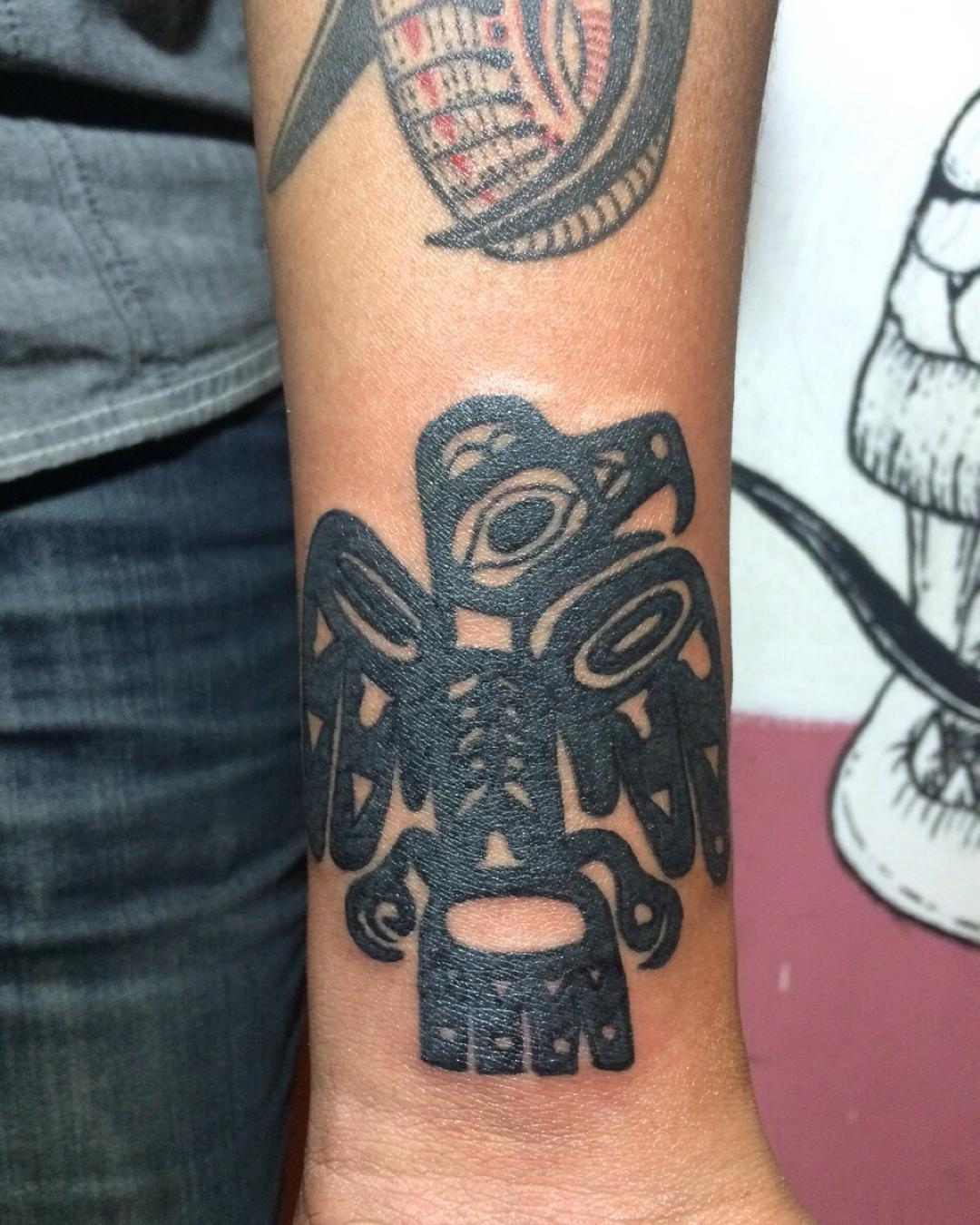 7. A traditional Aztec eagle tattoo in an upright position inked on the sleeve area.

8. A traditional Aztec eagle tattooed on the arm. 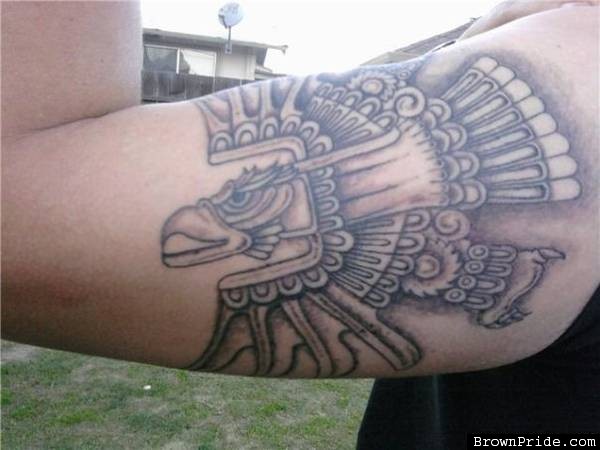 The life of an Aztec warrior is at constant war. Battles are often wages against neighboring city-states to capture prisoners that could be sacrificed to the gods. The meaning of this design is bravery and journey to the afterlife.

Feeling brave? Here are some Aztec warrior tattoos we saw on the internet that might ignite your inner brave soul.

1. A shoulder tattoo of a dead Aztec warrior. 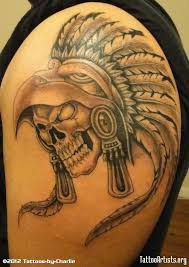 2. A large intricate full back Aztec tattoo of a warrior and a priestess.

3. A classic leg Aztec tattoo of an Aztec warrior. 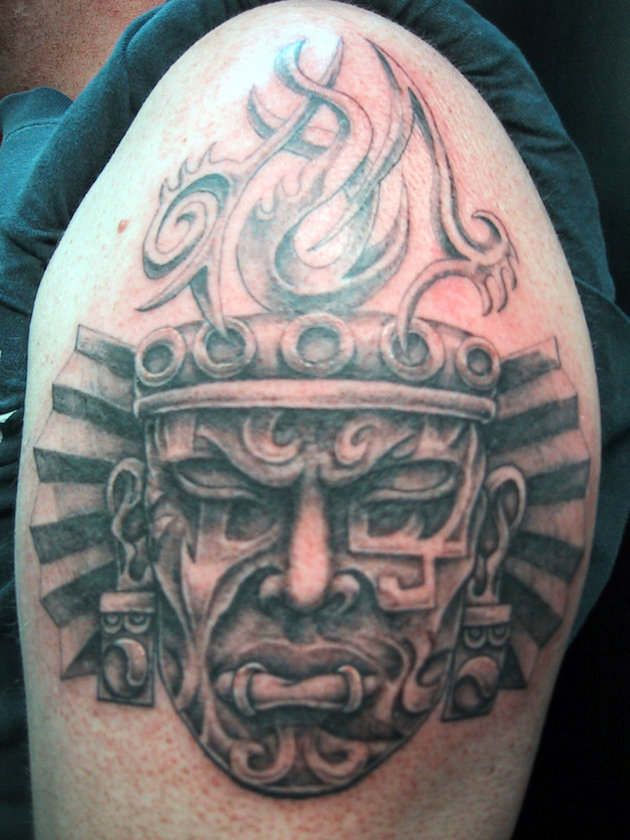 4. A realistic shoulder Aztec tattoo of a face of an Aztec warrior. 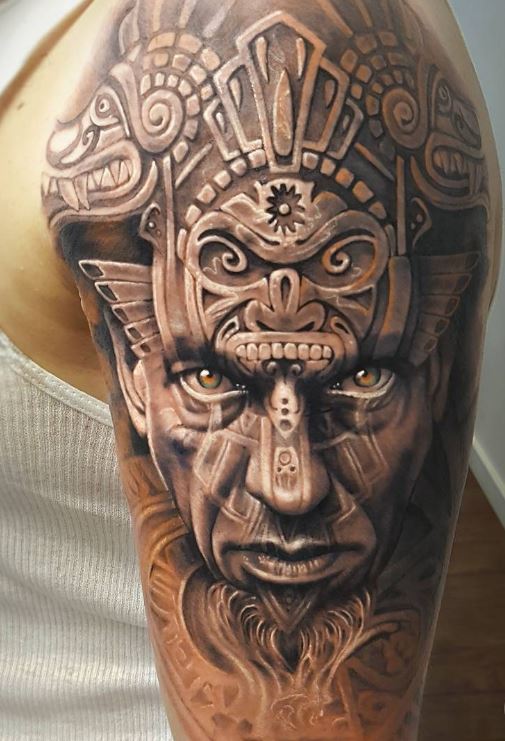 5. A complex sleeve Aztec tattoo of a warrior with the Sun Stone in the background. 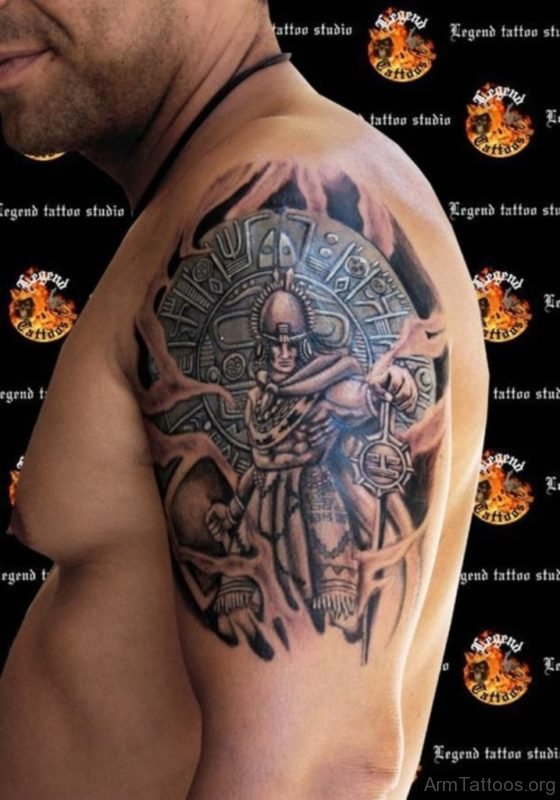 6. An intricate shoulder Aztec tattoo of a warrior with an eagle and temple at the background. 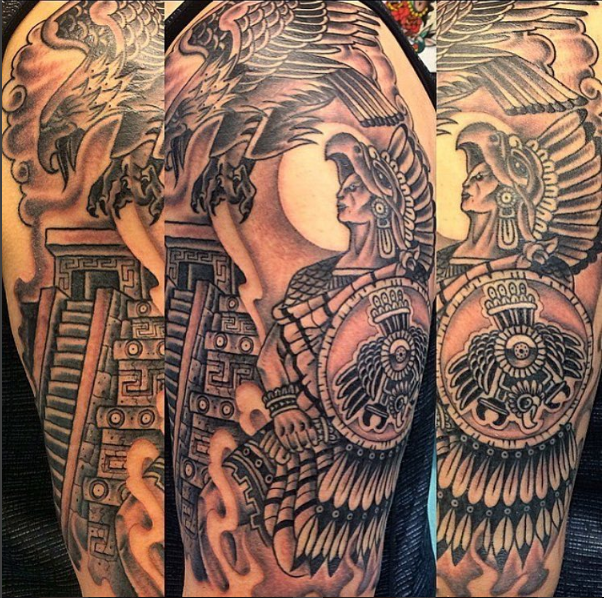 Very often, this tattoo design is placed on the shoulder and chest area but contrary to what most tattoo artists say, Aztec tattoo designs are versatile and can be placed on any part of the body the enthusiast wants.

Now you know the basics of Aztec tattoo designs, go ahead and have one tattooed! We are absolutely sure that you will love the results!

[…] A very colorful and vibrant neotraditional tattoo on the wrist of a butterfly with Aztec-like detailing. […]

[…] highly detailed Aztec tattoo on the sleeve area of the […]