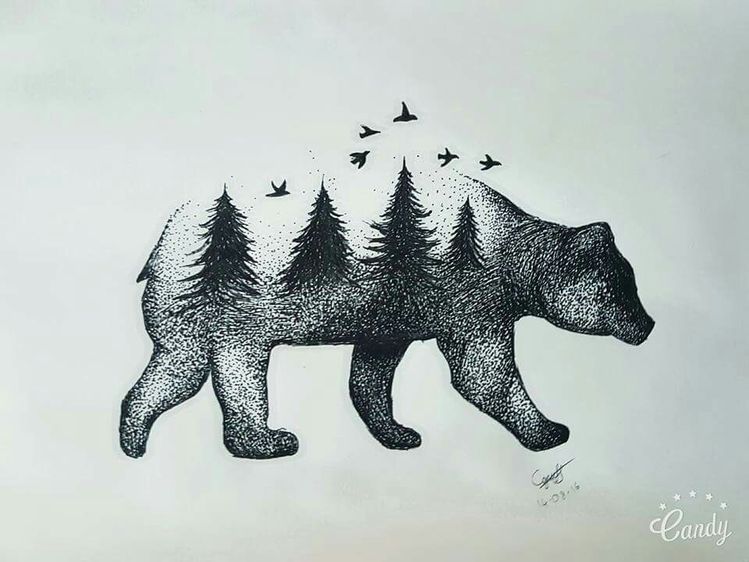 Animals are among the most popular motifs in tattoo culture. Tattoo designs which depict animals are highly popular because they are very rich in symbolism. Bear tattoo designs are among the most sought-after, as they can symbolize many feelings and attitudes. Bear tattoos can be presented in many different ways, so it’s best to know a little more about their meaning before getting yourself one.

What is the History of Bear Tattoos?

Bears have long been worshipped throughout the history of many different cultures. Native Americans believed that bears were spiritually linked to another world and they had magical healing powers. Admired for their hunting abilities and sheer brute force, bears were often represented visually in the Native American culture through tattoos and wall markings.

The Slavic culture picture bears as a symbol of courage, patience, majesty, and motherhood. The ancient Egyptians observed bears as epitomes of authority, privilege, and utter dominance.

The Scandinavian mythology presents bears as creatures who are militant and bold. Similar to the Native Americans, Scandinavians also believed that bears can connect them spiritually with Gods.

Once you decide upon getting a bear tattoo, you should first check the meanings and decide which breed of bear you want tattooed.

What are Some Examples of Bear Tattoo Designs?

Teddy Bear tattoo designs are commonly meant to be adorable and they usually stand for innocence, love, and other sorts of affection. It is an unwritten rule that these are more worn by women than men.

Also, did you know that these bears got their name because of President Theodore Roosevelt? Once he went on a hunting expedition and refused to kill a black bear cub his attendants caught and tied up for him. Due to the incident, several political cartoons which pictured a disgusted Roosevelt and a cute bear popped up across the country.

As derived from many different cultures, bears have influenced modern art forms in numerous ways. Among those are children’s cartoons. Yogi Bear and Winnie the Pooh are probably the most well-known.

This has evolved even further into the realm of tattoo designs based on the Gummy bear candy.

Koala Bears are widely known as part of the Aboriginal folklore and these cute little creatures are commonly perceived as friendly. This is why it’s usually reflected in a tattoo design as a sign of calm and an easygoing character.

Pandas have been a subject of worldwide obsession. Quite deservedly so, because these animals are one of the rarest bears in the world. In the form of a tattoo design, the panda usually represents balance, harmony, and sometimes even good luck. Pandas are also often associated with the Chinese Yin-Yang symbol, mostly due to their very similar black and white coloring.

Polar bears are often associated with Eskimo and Arctic cultures. It is widely accepted as a symbol of love and affection, especially towards kids. Even Coca-Cola uses them for their advertising campaigns.

Both these usually strike fear into the hearts of other animals. They are very intelligent but also very dangerous creatures. Those who wear tattoos depicting these bears consider themselves warriors. Grizzlies can easily be discerned from black bears because they are brown.

Tattoos with tribal influences are always popular among tattoo enthusiasts, but when combined with a bear for a tattoo design, it’s an instant and absolute killer combination. Symbols of tribal significance have been around for so long that it’s been hard to trace back the exact meaning behind each one.

Tattoo ideas with bears connected to Celtic influences usually conjure images of paganism and spirituality. According to Irish traditions, wearing a Celtic bear tattoo connects you to the elements of nature.

This is another common bear tattoo, often very popular among girls.

The Meaning Behind Bear Tattoos

Bear tattoos represent different things in different cultures. Ever since the ancient ages, people have worshipped bears and some even thought of them as direct connections to Gods. From spiritual connections to sheer brute force, bear tattoos may stand for many things. Some of the most common meanings behind bear tattoos include:

Girls vs. Boys: What are Their Preferences?

Bear tattoos are very popular among both genders, but guys usually go for the motifs which tend to express power, strength, bravery, and leadership. Girls commonly express their tender side through bear tattoos, mostly teddy bears and cartoon characters, such as Winnie the Pooh.

The more aggressive, masculine designs of bear tattoos usually end up on the chest, the back, the shoulders, and the thighs. Girls usually go for more feminine places such as the lower back, the back of the neck, or the ankle.

If you really want a bear tattoo, we can provide you with some of the most stunning designs out there. Ran out of ideas? Don’t like what’s already out there? Then have a look at some of these bear tattoo ideas and designs.

1. A tribal bear tattoo design disguised as a bear. 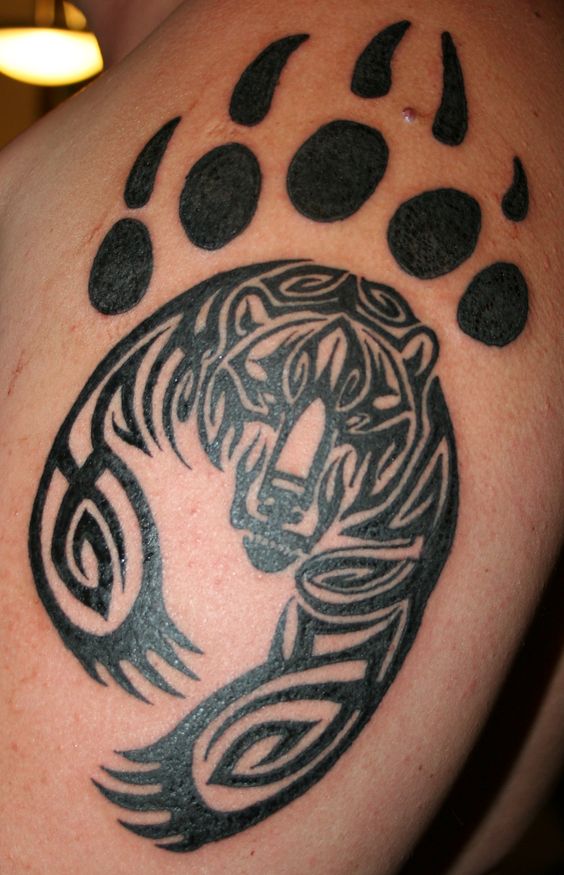 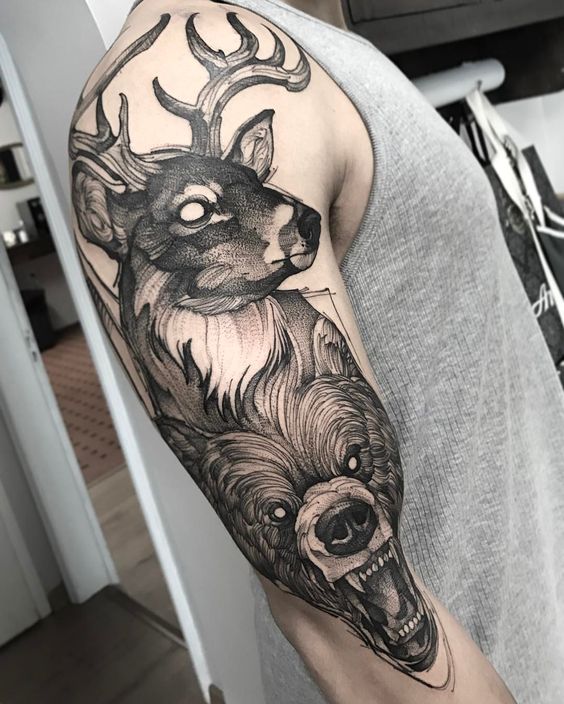 3. A bear tattoo in the shape of California. 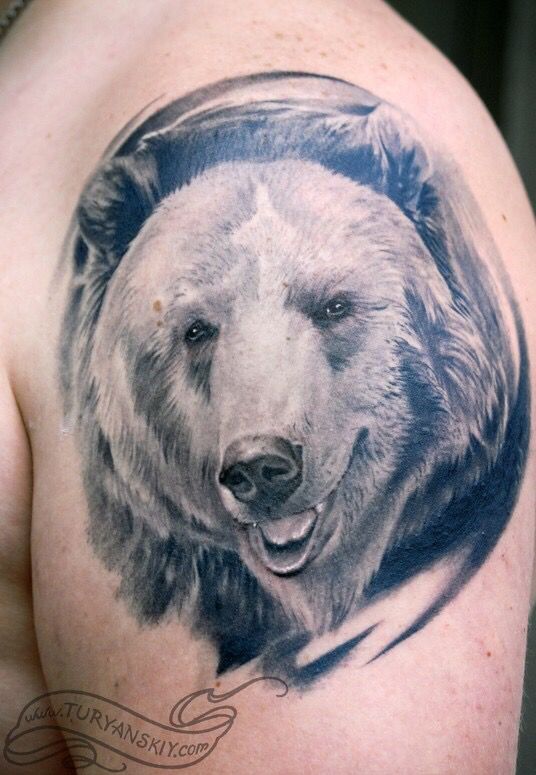 5. A Koala Bear Tattoo with an abstract approach. 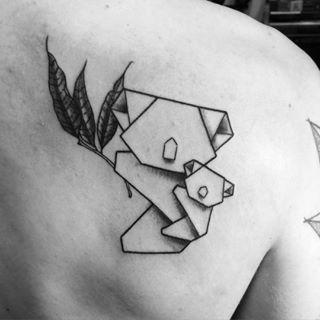 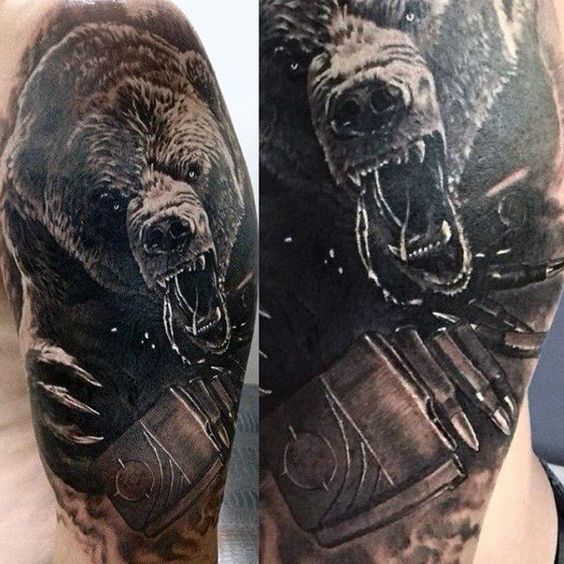 7. A bear tattoo with a forest. 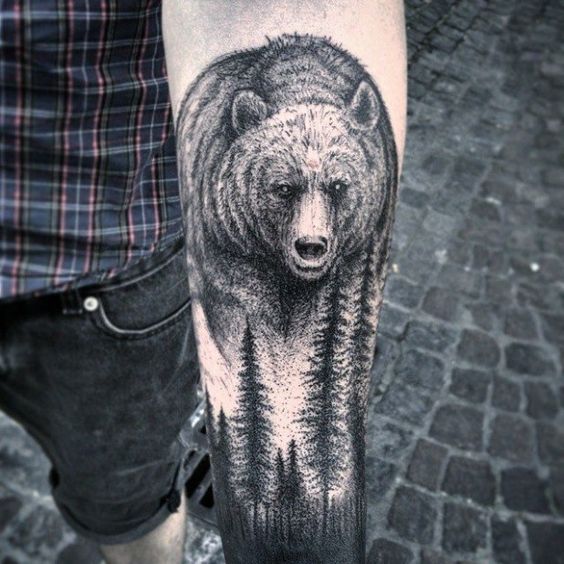 8. A tattoo of a family of bears with the forest as a double exposure. 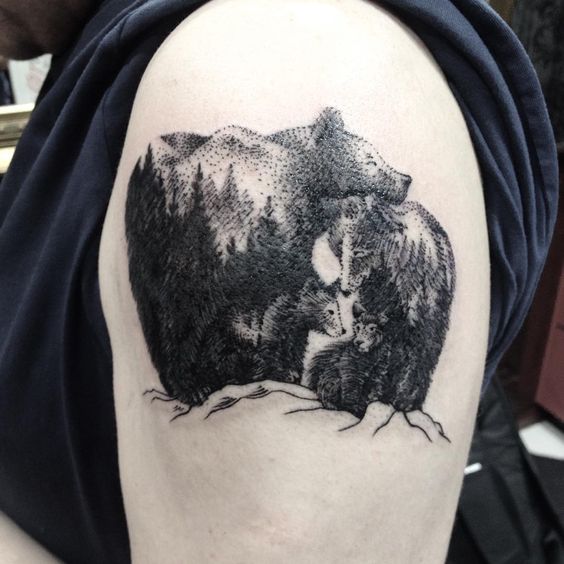 10. A tattoo of a mother bear and her cub with the forest as the double exposure. 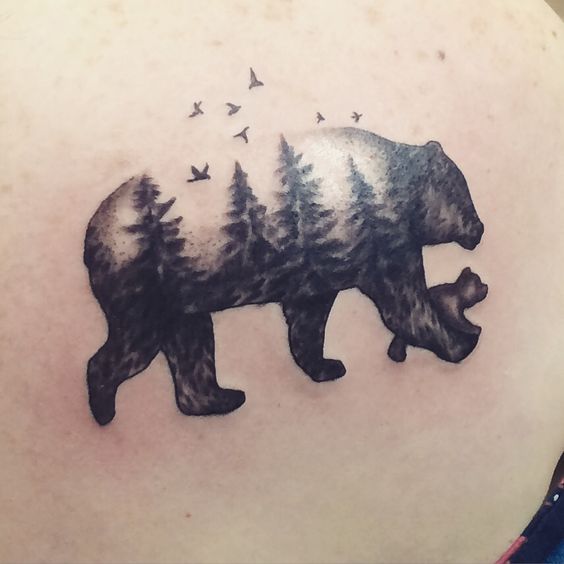 11. Another bear tattoo of a mother and her cub. 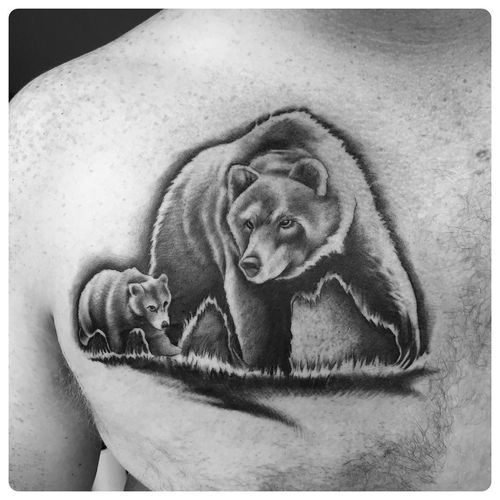 12. An artistic bear tattoo with the forest growing on the left half of the bear. 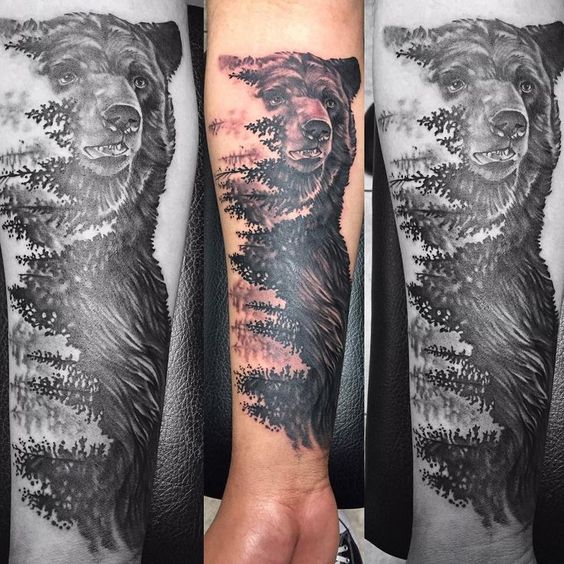 13. A tattoo of a bear in the wilderness. 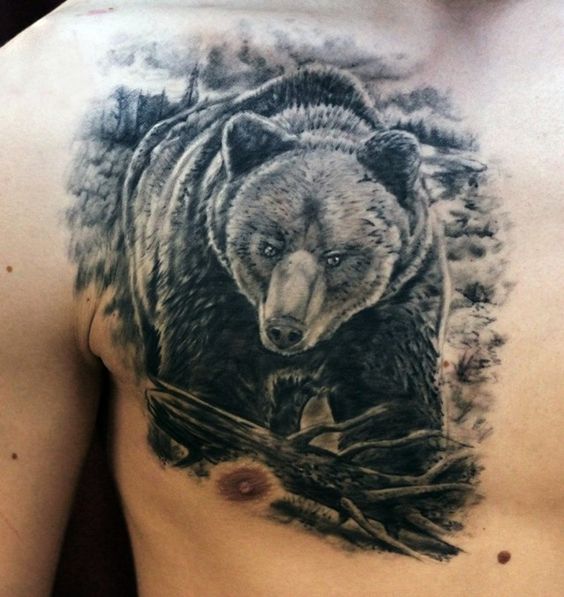 14. A tattoo wherein it features a bear ripping the skin apart. 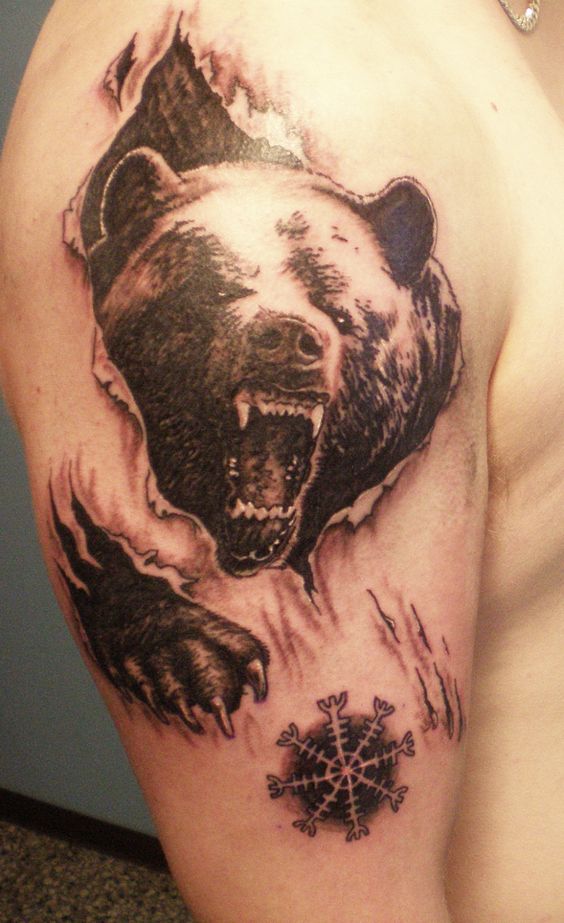 15. A calm bear tattoo with a calm landscape. 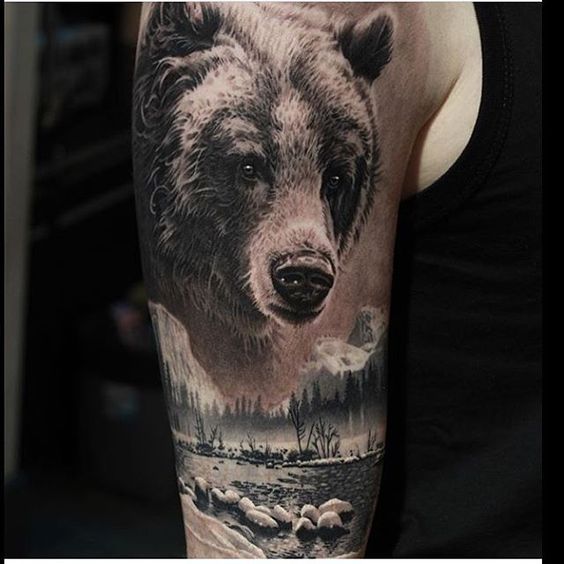 16. A tattoo that features the outline of a bear and a scenic landscape. 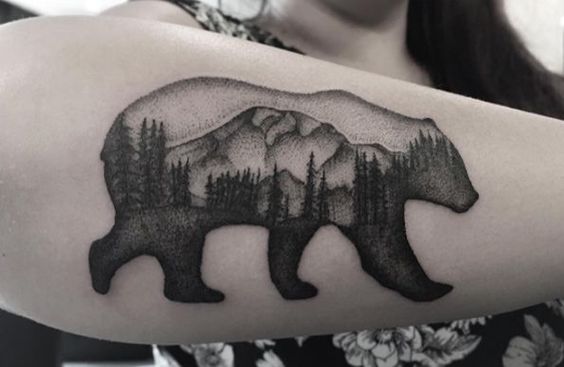 17. A modern take on a classic bear tattoo. 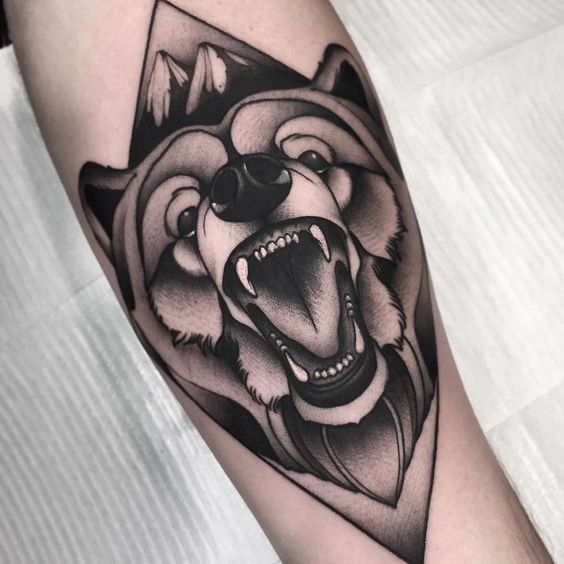 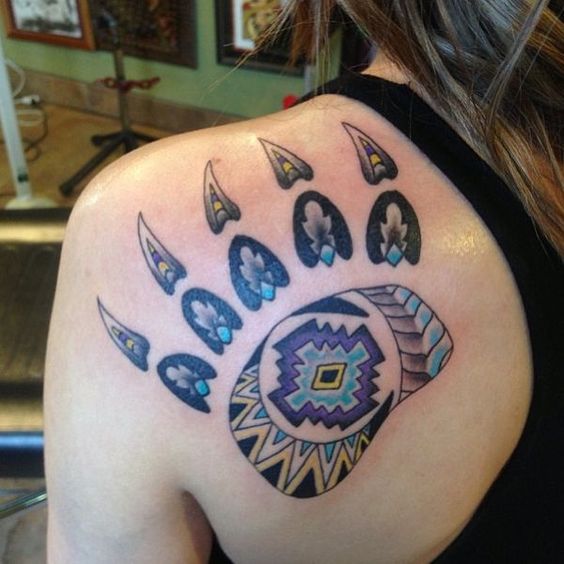 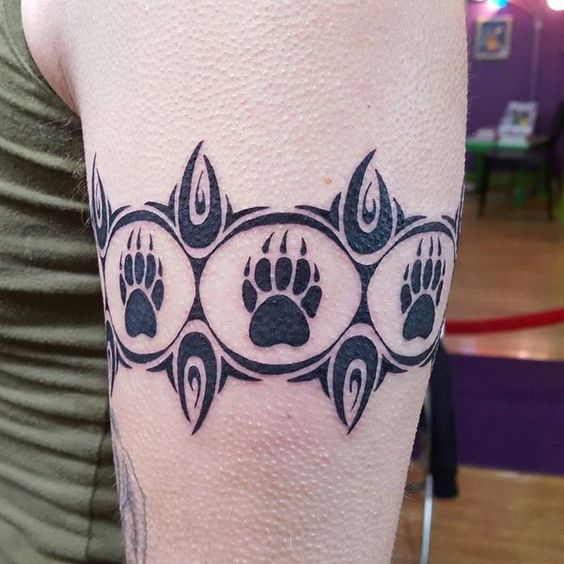 20. two bear paw tattoos inked on either side of the chest. 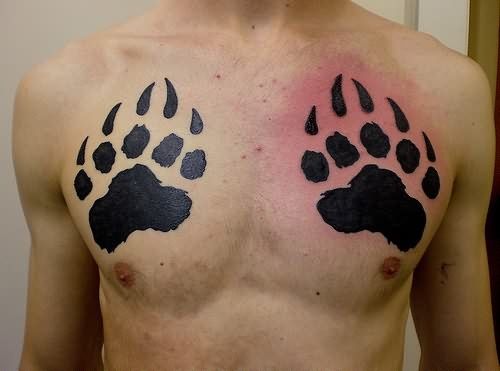 21. A watercolor tattoo of a polar bear. 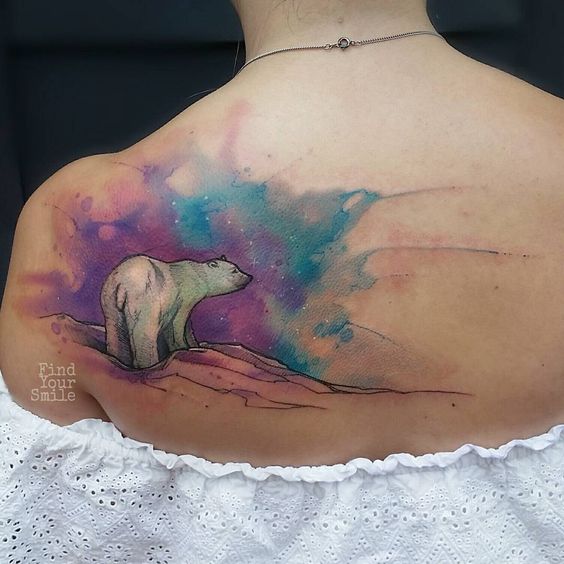 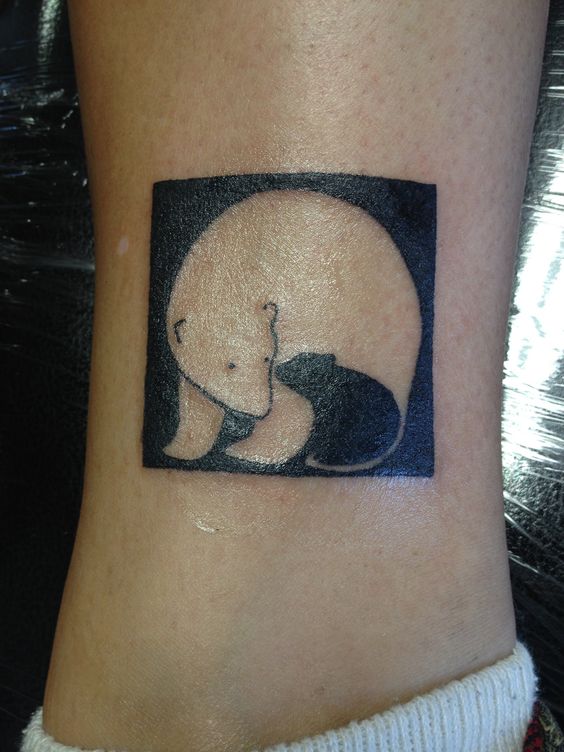 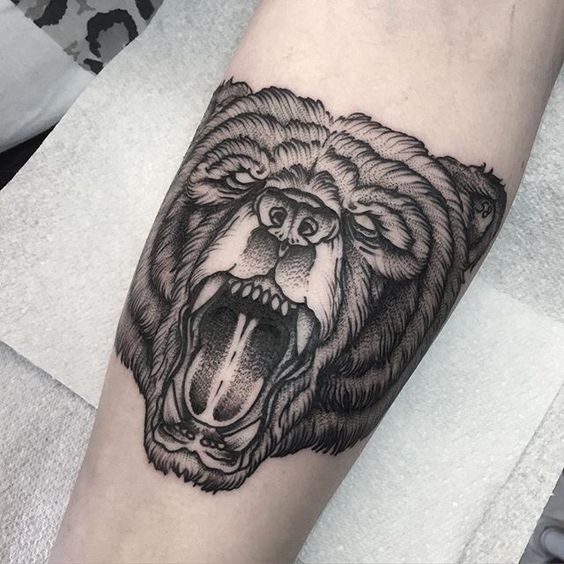 24. Another bear tattoo wherein the bear is designed to rip the skin. 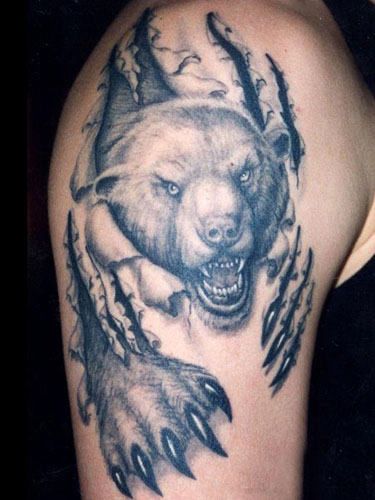 25. A bear tattoo with the sea for detailing. 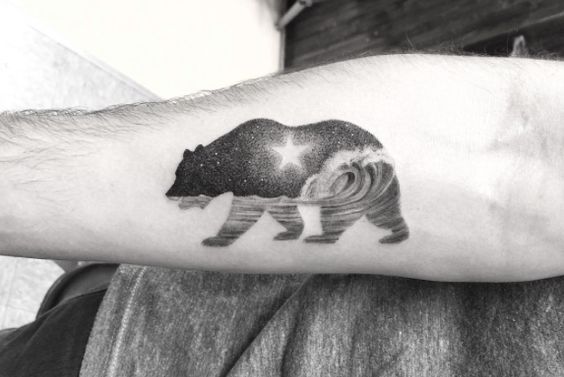 26. A bear tattoo that looks like a rough sketch. 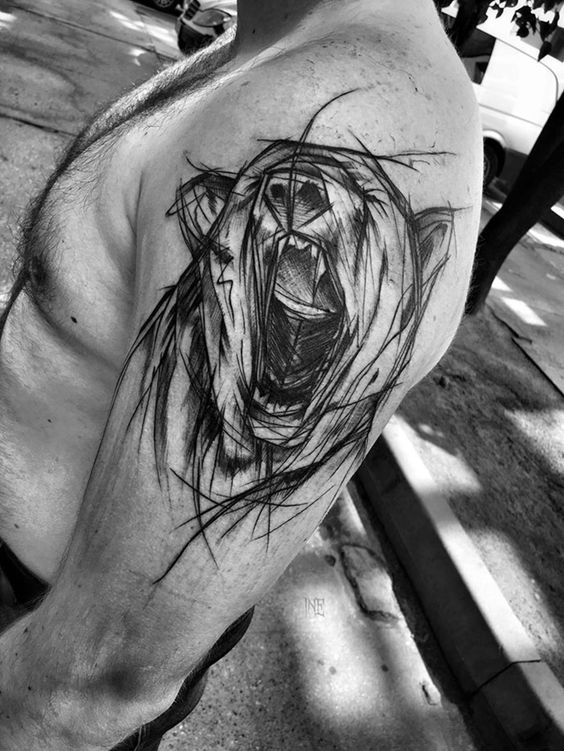 27. A bear paw tattoo that imitates the look of a sketch. 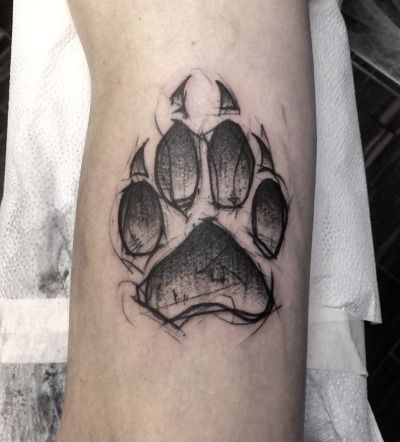 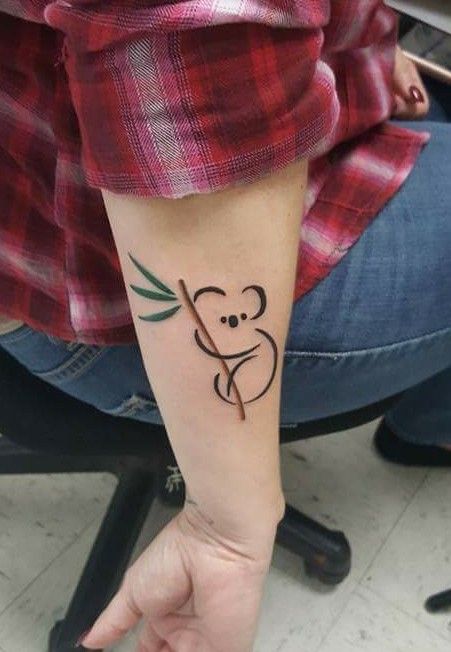 29. A bear paw tattoo that is surrounded by tribal-inspired detailing. 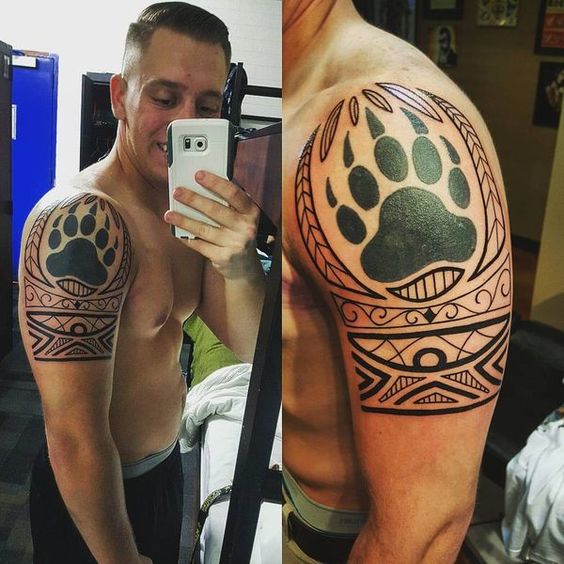 30. A calm bear tattoo with a pinewood forest. 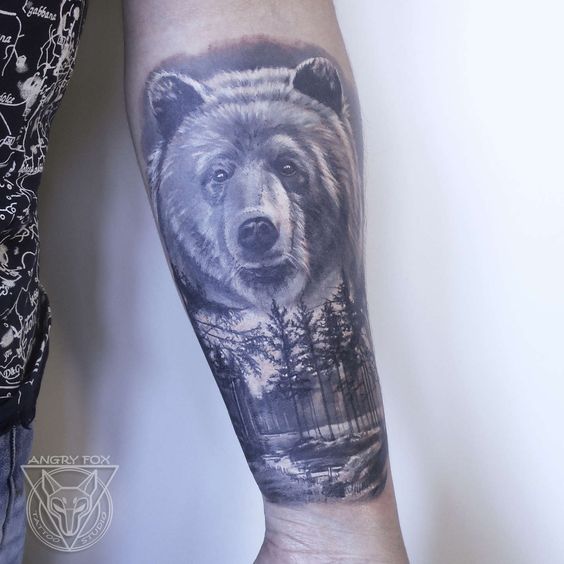