30+ Images Of The BEST Jellyfish Tattoo Ideas You Will Love 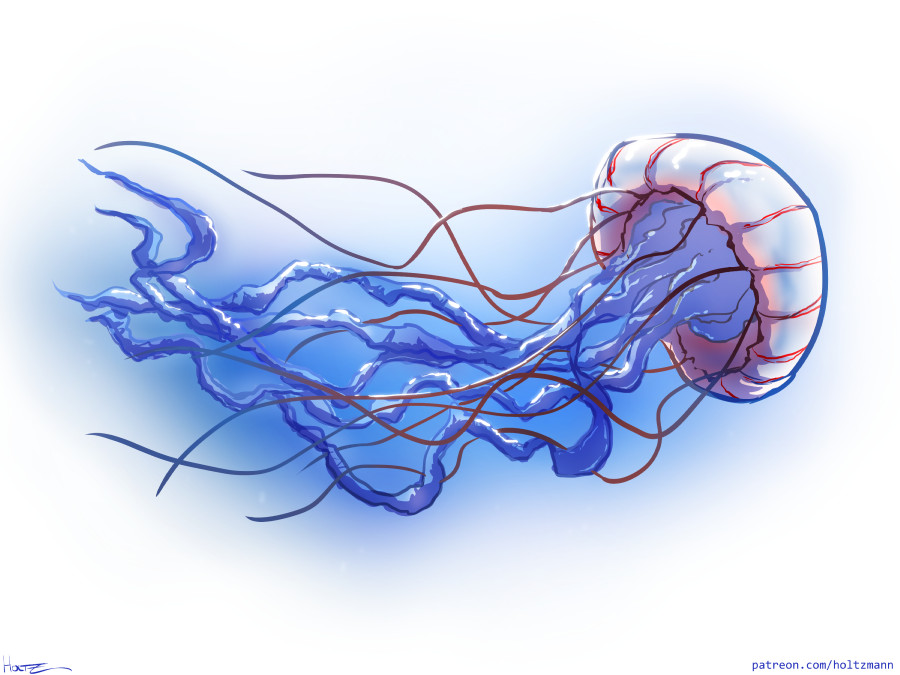 Jellyfishes have roamed the seas for millions of years. They are considered as a living fossil by some due to their age. But despite this, the jellyfish has continued to thrive even in the harsh environment of today. Our fondness for them came from their squishy bodies with around hundreds of species of jellyfish traveling the seas at any given second, it came to no surprise that tattoo artists and tattoo enthusiasts have drawn inspiration from the graceful, yet deadly, jellyfish for beautiful and stunning jellyfish tattoo designs.

Since you are here, we are assuming that you would like to have a jellyfish tattoo on your body. In this article, we will be providing you a lot of details regarding this tattoo design. We will be giving you a background on jellyfishes, meaning of a jellyfish tattoo, the perfect body placement and design for this tattoo.

Jellyfish or jellies are soft-bodied, free-swimming aquatic animals with a gelatinous umbrella-shaped bell and trailing tentacles. The bell can pulsate for propulsion and movement. The tentacles can be used to catch prey or defend against predators by releasing toxins in a painful sting. (source: www.wikipedia.org) Contrary to the name, jellyfish is not a fish but rather a different creature all on its own.

Oftentimes, we consider jellyfishes as a pest of the open seas. With numerous reports of jellyfish stings annually from famous beaches across the globe and swarms of the creatures blocking cooling vents of several power plants which can cause massive blackouts, its no wonder why we consider these graceful creatures as such. But behind these problematic reports about them, jellyfishes have been an important part of the ecosystem as a source of food for various marine animals such as fish.

Jellyfishes have been prominent in popular culture since the dawn of the twenty-first century. In cartoons, for example, Jellyfishes has been the object of interest by Spongebob Squarepants, the titular character of a famous Nickelodeon cartoon franchise.

In the medical field, jellyfishes are harvested by various companies for their collagen. The jellyfish is known to be a rich source of collagen and other nutrients that are considered as “brain food” like GFP (Green Fluorescent Protein).

Jellyfishes have also been considered as a source of food. In China, for example, jellyfish are often eaten as a salad with other vegetables and sesame oil which gives the salad a chewy and savory texture. In Japan, jellyfish tentacles are often scraped and dried to be rehydrated later with brine and seasoned with soy sauce and other seasonings.

These creatures have also gained popularity in public aquariums. Oftentimes, jellyfishes are placed in a special aquarium of various shape and sizes that can emit light and because most jellyfish are translucent, they are often featured in a room with various colors of light. They also gained popularity in the aquarium industry because they are considered as a low maintenance creature and most often than not, jellyfishes are considered immortal with no specific lifespan.

Where To Place My Jellyfish Tattoo?

Despite the jellyfishes’ pest-like attributes, the awesome thing about having a jellyfish tattoo is that it can be placed anywhere and because the creature is extremely flexible, you can have this tattoo design morph into what shape you desire.

If you cannot think of a specific area of your body to have this specific tattoo design be inked, the usual places where you can place this tattoo is on the limbs (arms and legs), ribcage, and back areas of the body.

Jellyfishes are often depicted in tattoo designs as what they are and are often in contrast to other marine-themed tattoos such as Octopus and Kraken Tattoos where you can add your own touch to it. This specific tattoo design is actually famous for watercolor tattoos. Artists and enthusiasts can have their own colors be implemented into the design.

Here are some pictures of jellyfish tattoo designs to inspire your next tattoo.

1. A small jellyfish tattoo on the shoulder with hair-like tentacles. 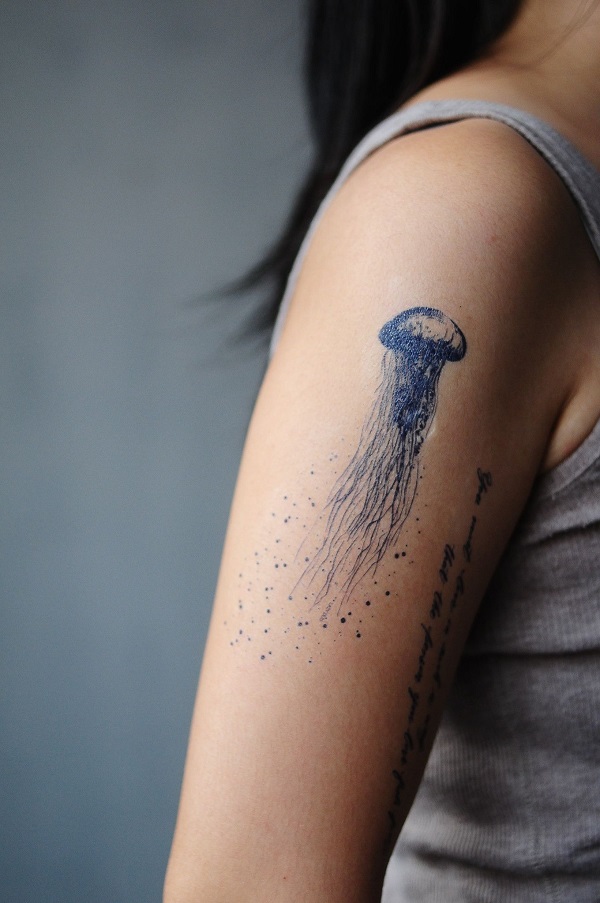 2. A monochromatic tattoo of a realistic jellyfish on the arm. 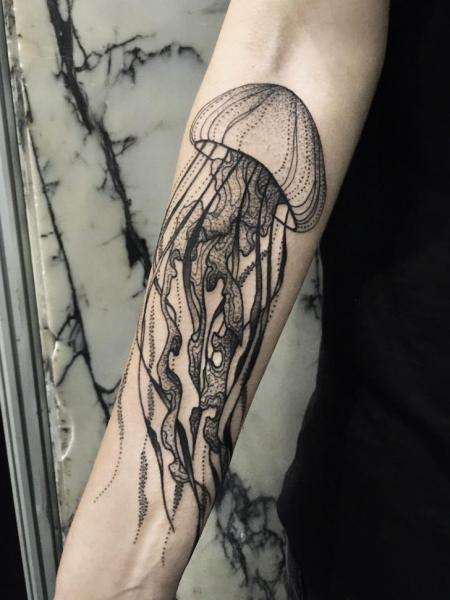 3. A pink and blue watercolor tattoo of a jellyfish on the arm. 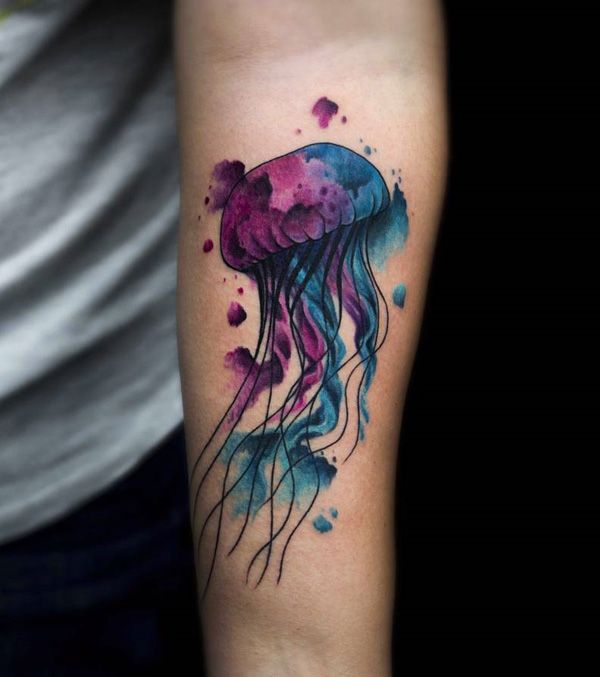 4. An extremely colorful watercolor tattoo of a non-translucent jellyfish with extremely detailed tentacles under the blue sea which is inked on the thigh area. 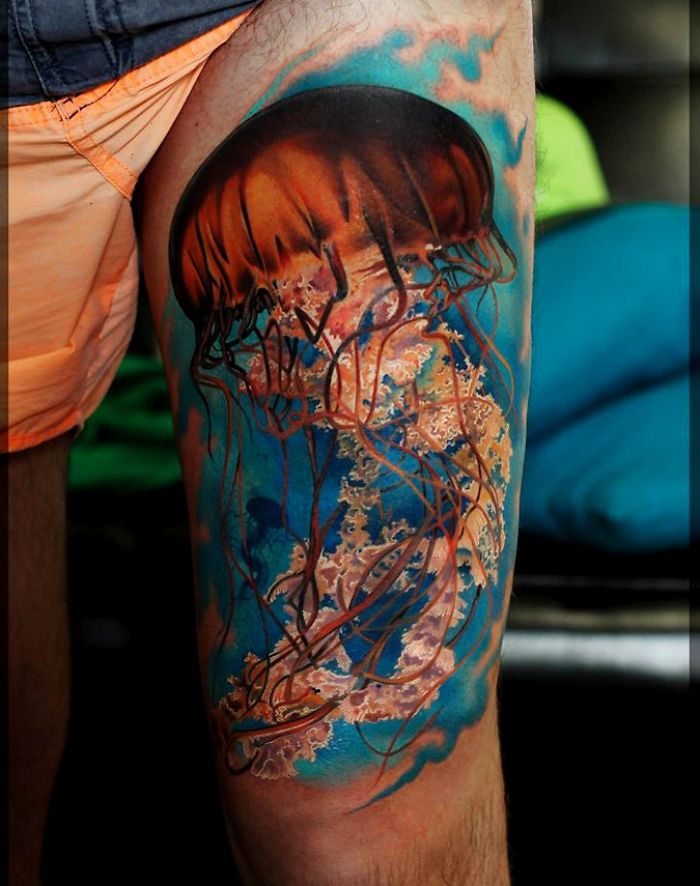 5. An artsy detailed jellyfish tattoo on the shoulder with tentacles extending to the sleeve area. 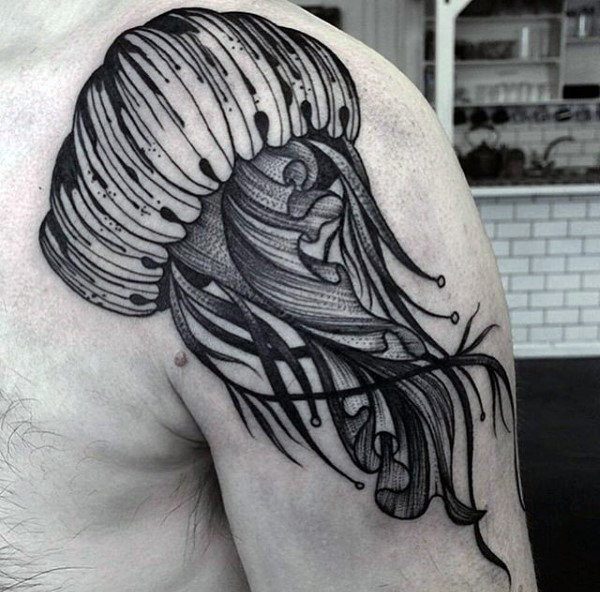 6. A large jellyfish tattoo with intricate tentacle work on the left butt cheek. 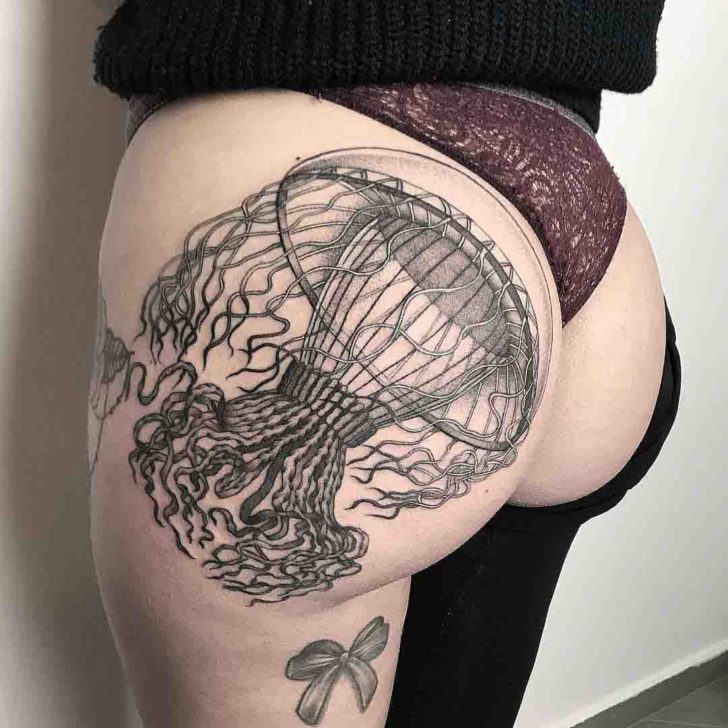 7. A large leg tattoo of a jellyfish with its long tentacles extending up to the ankles. 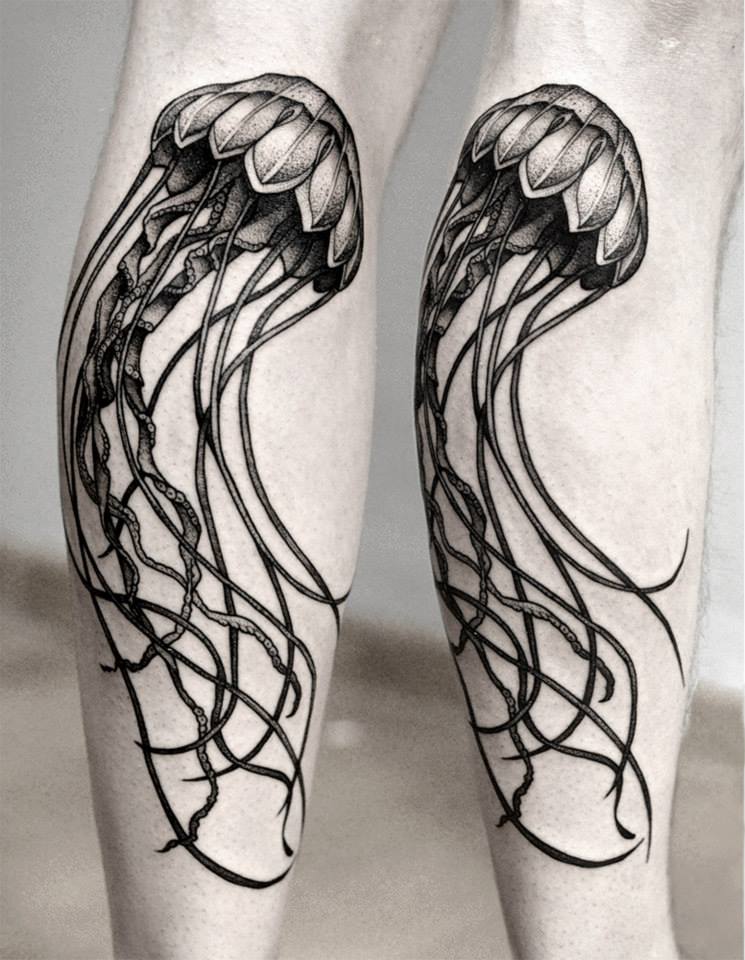 8. An intricate and large sleeve tattoo of a non-translucent jellyfish. 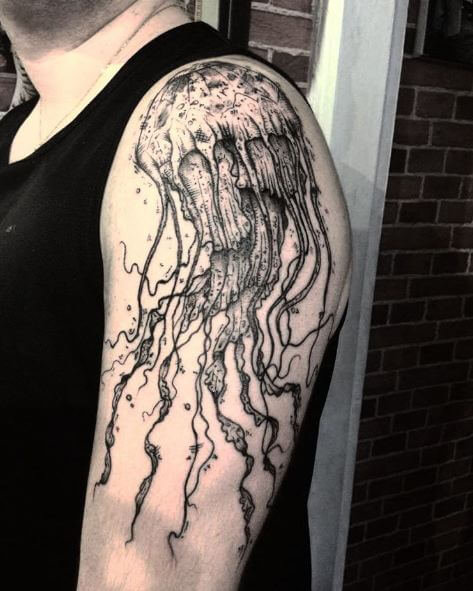 9. A realistic-looking ankle tattoo of a jellyfish. 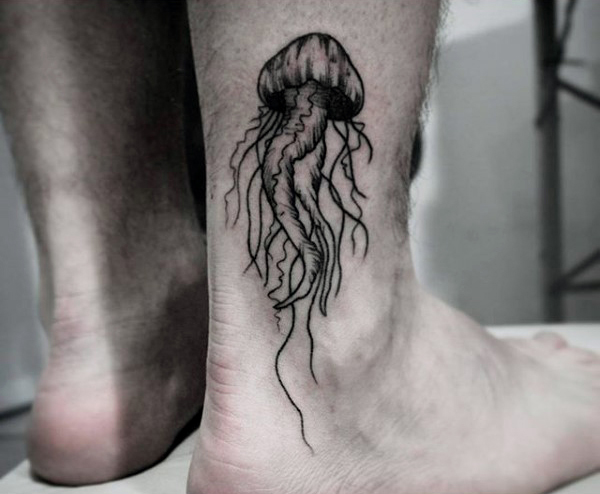 10. An artistic depiction of a jellyfish as an ankle tattoo. 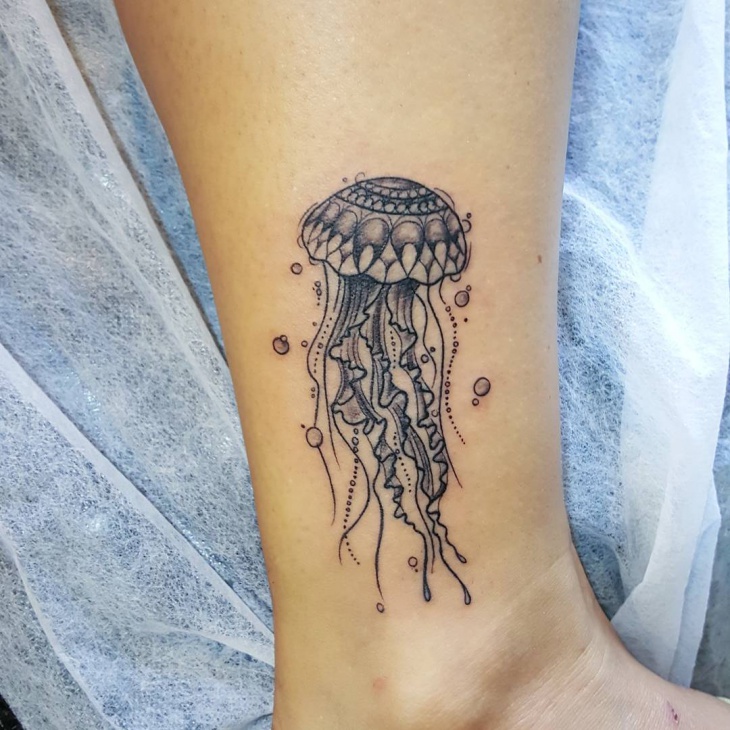 11. A large half-chest tattoo of a jellyfish with its tentacle intertwining with one another. 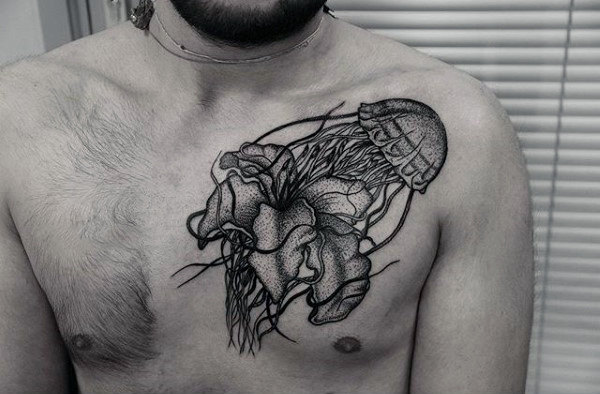 12. An eerie-looking jellyfish tattoo with cyan and red accent colors to further its eerie looks. 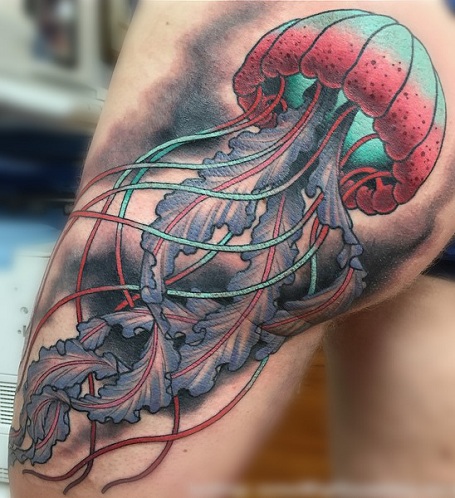 13. A jellyfish tattoo on the leg with the earth as a translucent detail. 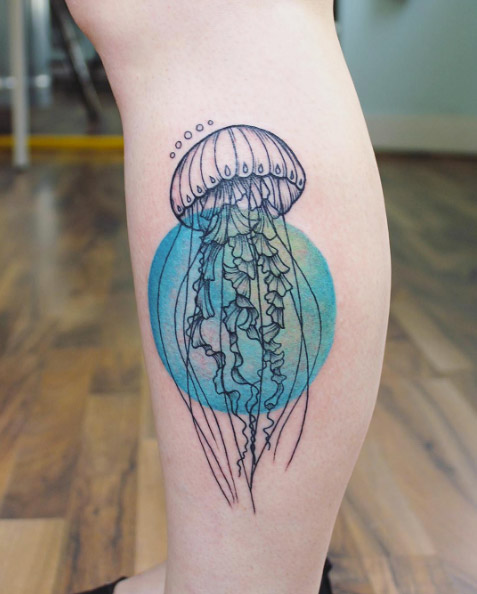 14. A really colorful thigh tattoo of a jellyfish with watercolor as its ink. 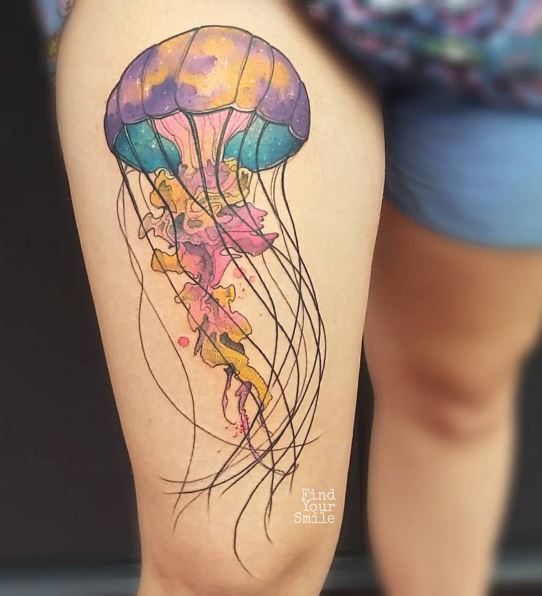 15. A realistic depiction of a box jellyfish as a thight tattoo. 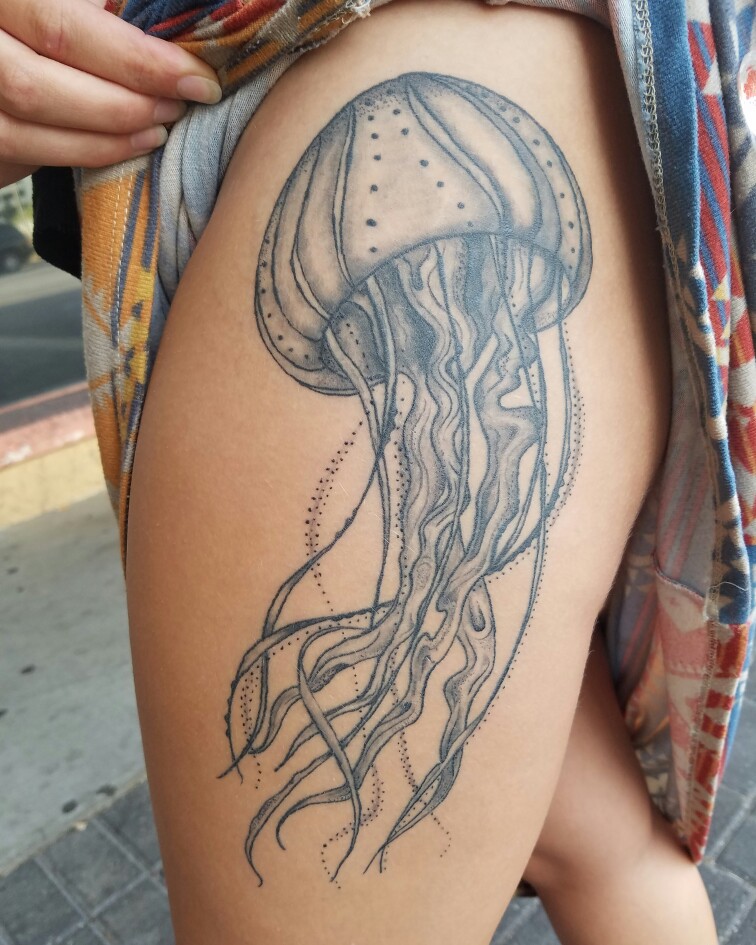 16. A watercolor tattoo of a jellyfish with purple, blue, and red accent colors. 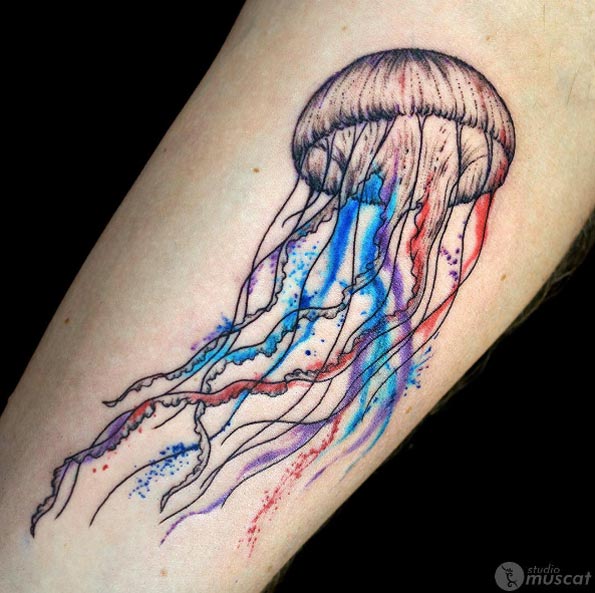 17. A black ink jellyfish tattoo on the ribcage with intricate details on the tentacles.

18. A bluish pink jellyfish tattoo on the sleeve area with intricate tentacle work. 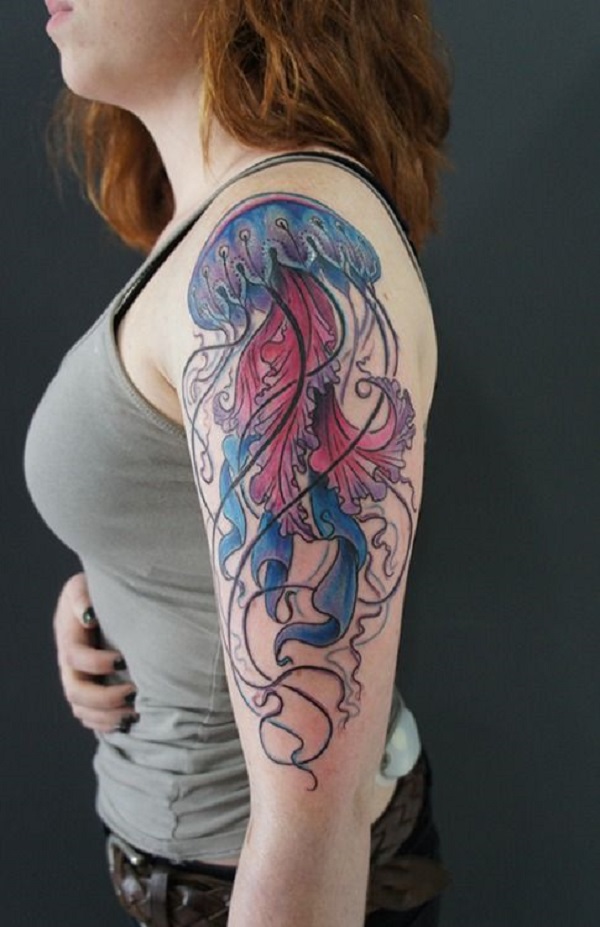 19. A thigh ring tattoo of a jellyfish surrounding the thigh. 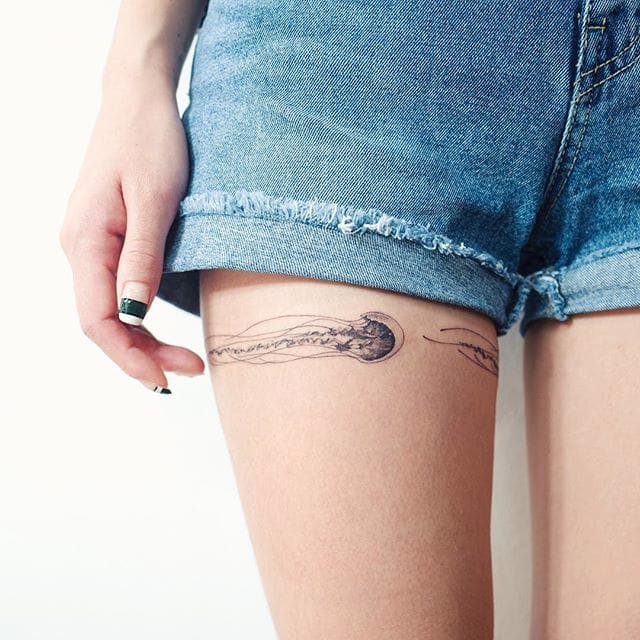 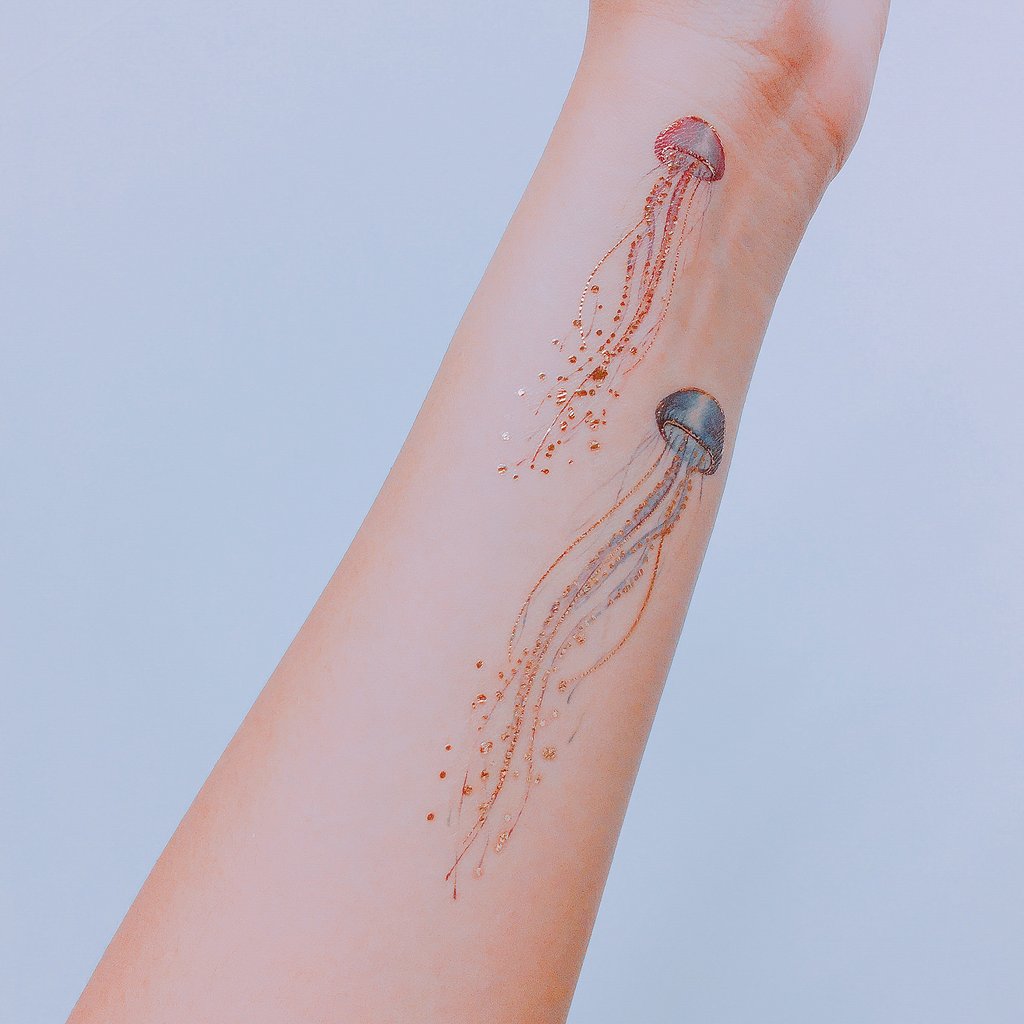 21. A large sleeve tattoo of a red jellyfish with cartoonish resemblance. 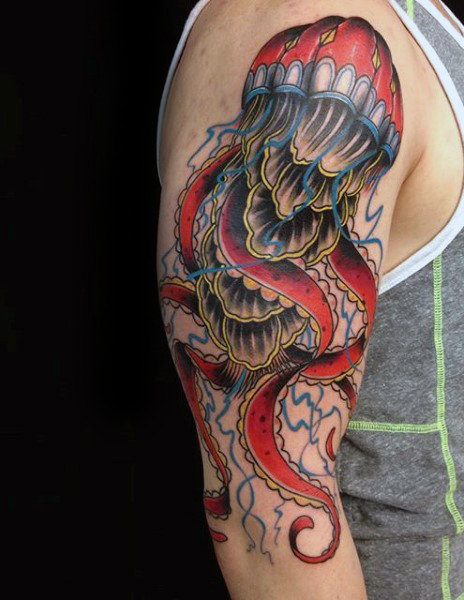 22. A tattoo of a luminescent jellyfish under the deep crevices of the ocean floor.

23. A large ribcage tattoo of a pink jellyfish with blue accentuating colours. 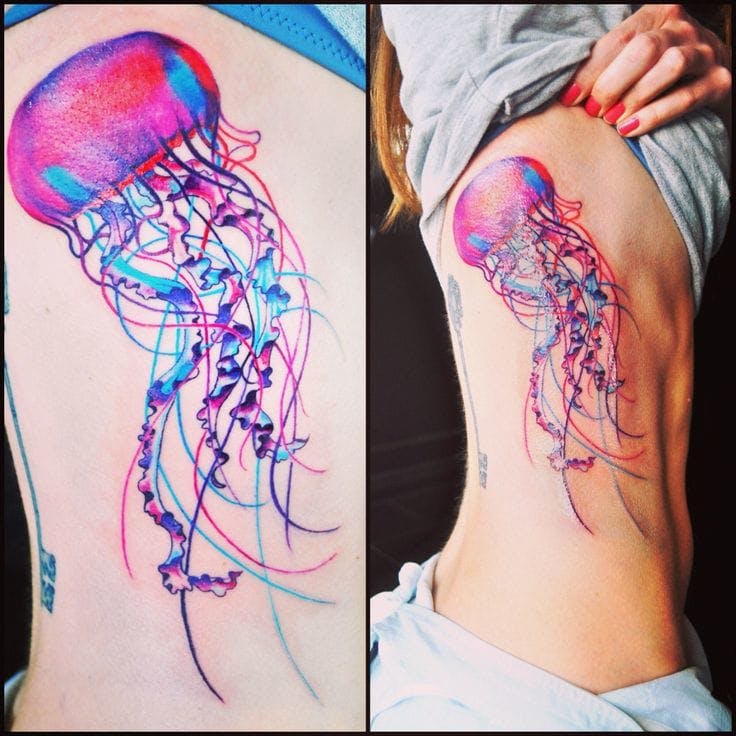 24. a colorful watercolor tattoo of a jellyfish under the sea inked on the sleeve area. 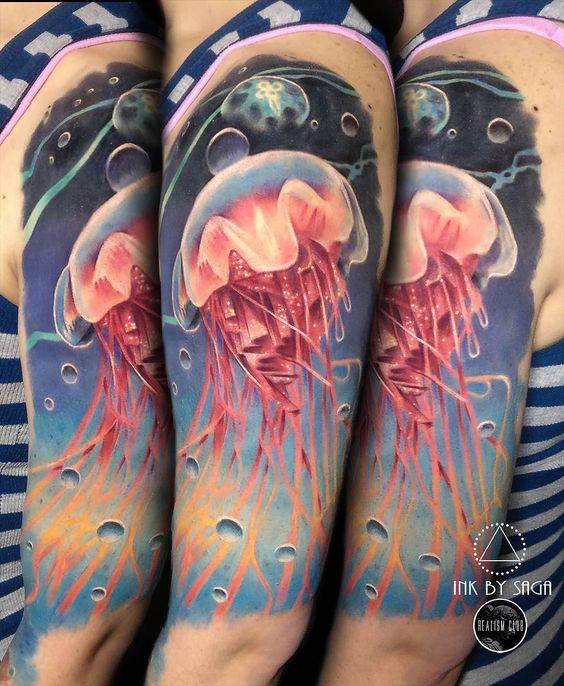 25. An artsy thigh tattoo of a jellyfish. 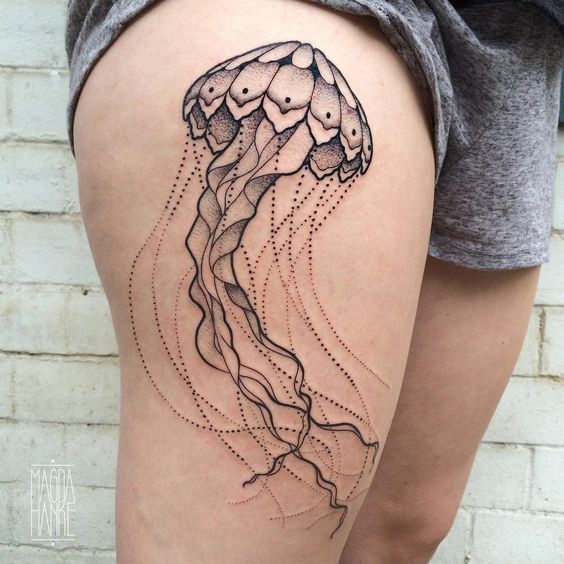