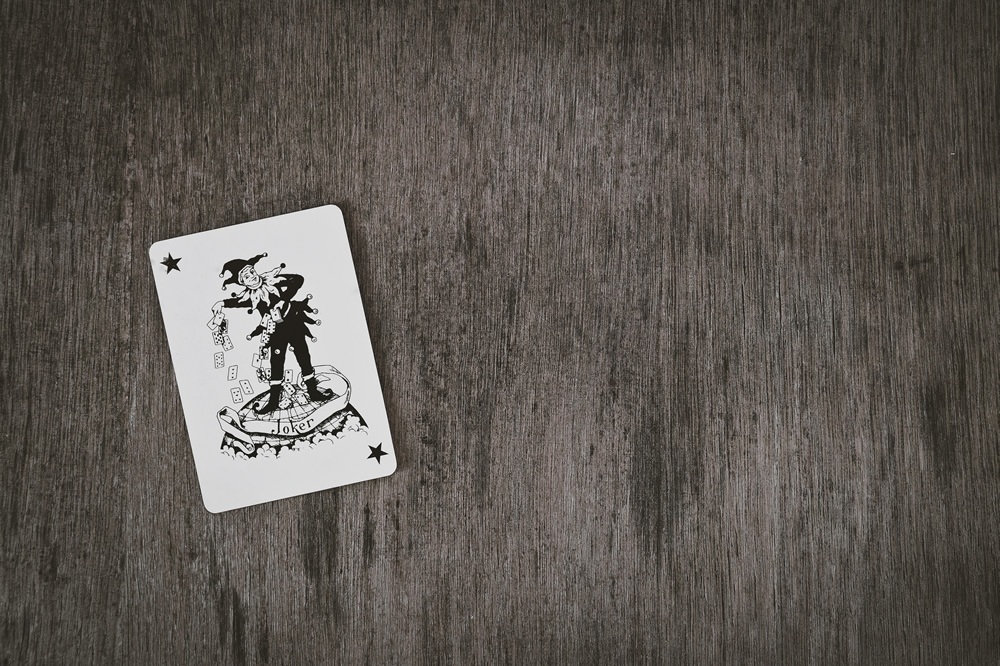 From a funny clown and a prankster to one of the most popular supervillains in comic book history, the Joker has taken many forms throughout the years. Because of his many personalities, The Joker has inspired many tattoo ideas and designs. Although you can find a lot of different Joker tattoos, the most mainstream ones authentically depict the Joker character from the Batman series.

In this article, we will dig deeper into the history of this tattoo and its meanings. We’ll explain what it is about the Joker that inspired so many people to wear him on their skin. In case you’re looking to get one yourself, we will give you some ideas and show you some of the most popular Joker tattoo designs.

The History of Joker Tattoos

The idea of the Joker has been around for centuries. Whether as a medieval Jester, a Tarot card, or a playing card, he’s been the face of free spirit, spontaneity, and risk-taking. People have been getting different kinds of Joker tattoos for decades to express their playful and witty personalities.

However, it wasn’t until Christopher Nolan’s movie The Dark Knight came out in 2008 that these tattoos gained extreme popularity. The image of the Joker gained a whole new dimension.

Played by Heath Ledger, the Joker’s character reached many people who identified with him so much that they decided to have him on their skin. Permanently.

The Meaning of Various Joker Tattoos

Since the Joker can be seen in various forms, the meanings of this tattoo can be different depending on what it represents. Here are the most popular variations of this tattoo and their meanings.

A jester is a medieval version of what we today know as a clown. It is a symbol of quick wit and intelligent humor. A person who would get this tattoo sees it as a way to express their cheerful personality. They like harmless pranks and mockery and are often the life of the party.

Also known as the Fool, he is a symbol of new beginnings and journeys. It represents potential, creativity, and curiosity. People who get this kind of tattoo see themselves as adventurous and free-spirited.

They believe in taking leaps of faith and opening up new areas of their life. Also, they’re constantly growing and enjoying life to the full.

Here are a few tattoo designs of Tarot Jokers. 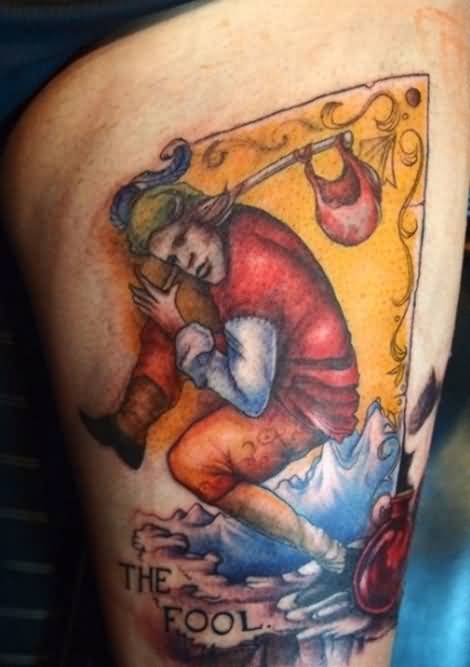 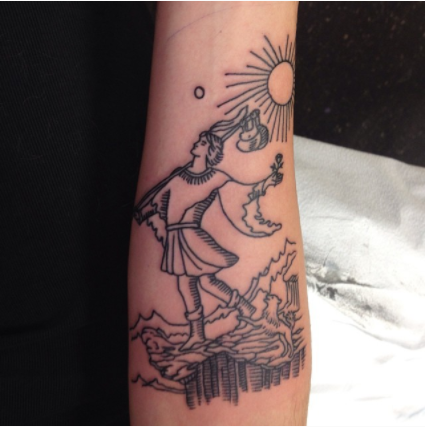 Pretty much every friend group has that one person who considers themselves to be the wild card. That’s exactly the type of person who would get this tattoo.

They’re foolish and spontaneous. They like surprises and unexpected events and are often out of control. For them, playing card joker tattoos are just right. 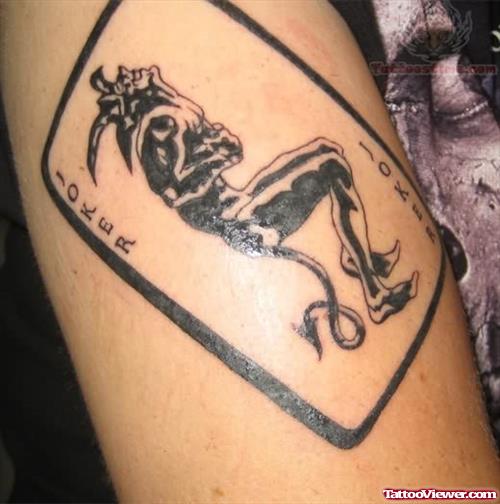 Imagine a movie character so powerful that he gave a whole new meaning to the idea of the Joker. Instead of a goofy trickster, we now see it as a symbol of madness, disturbance, and chaos.

It’s the complexity of this character that made people identify with it so much that it’s become the most popular version of the Joker tattoo.

Here are a few Joker Villain Tattoos as examples. 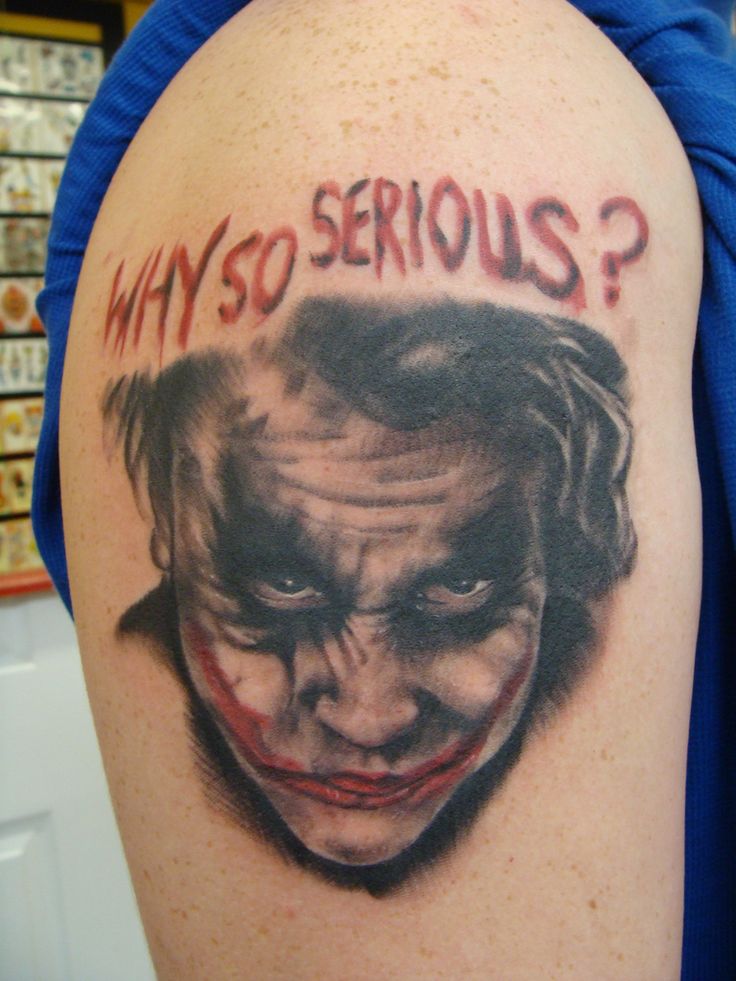 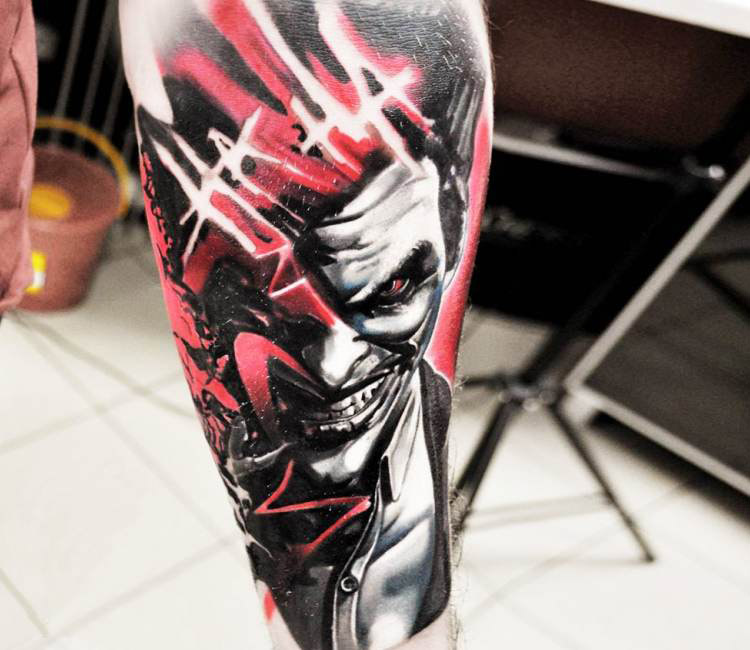 People who believe this tattoo fits their character are often provocative and mischievous. They take joy playing tricks on others and don’t care if they take it too far. They are rebellious and can’t be controlled.

On the lighter side, they like being perceived as entertainers, which they usually are.

Men vs. Women: What Are There Preferences?

When getting a Joker tattoo, men usually go for a dark and strong tattoo. The most common one is Heath Ledger’s version of the joker, with the ‘Why so serious?’ catchphrase also being a common choice. Men prefer bigger tattoos since they appear masculine.

On the other hand, women go for colorful, more feminine types of tattoos. The Tarot Card Joker is a lot more common in women than men. Women often choose light tattoos with not much shadow. Their tattoos are also often smaller and more discreet than men’s.

Where Can I Place Joker Tattoos?

Depending on the size and style, a Joker tattoo can be placed pretty much anywhere on the body. The most common placements are on the shoulder, forearm, and legs. If you want a big Joker, you can get your whole back tattooed. On the other hand, if you don’t want it to stand out, you can go for a discreet Joker on your wrist.

Keep in mind that the pain varies according to the body part you’re getting tattooed. The least painful ones are on the shoulders and arms. On the other hand, tattooing your ribs or inner thighs can be excruciating. Do it only if you have a high pain tolerance, or just really want a tattoo there.

Joker Tattoo Ideas You Will Love

So now that you know everything you should about Joker tattoos, we want to share some of the best ideas and designs we’ve seen. These are some of the most creative ideas around. Feel free to browse and find the best one for you.

1. A fullback colored tattoo of Batman’s antagonist, the Joker. 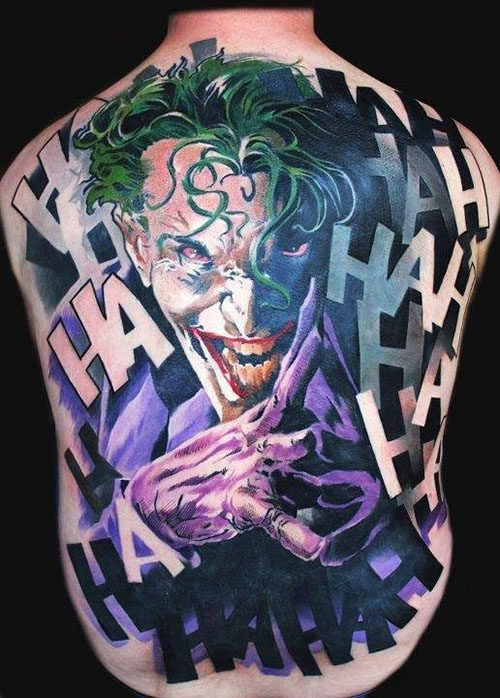 2. A sketch-like tattoo of Joker. 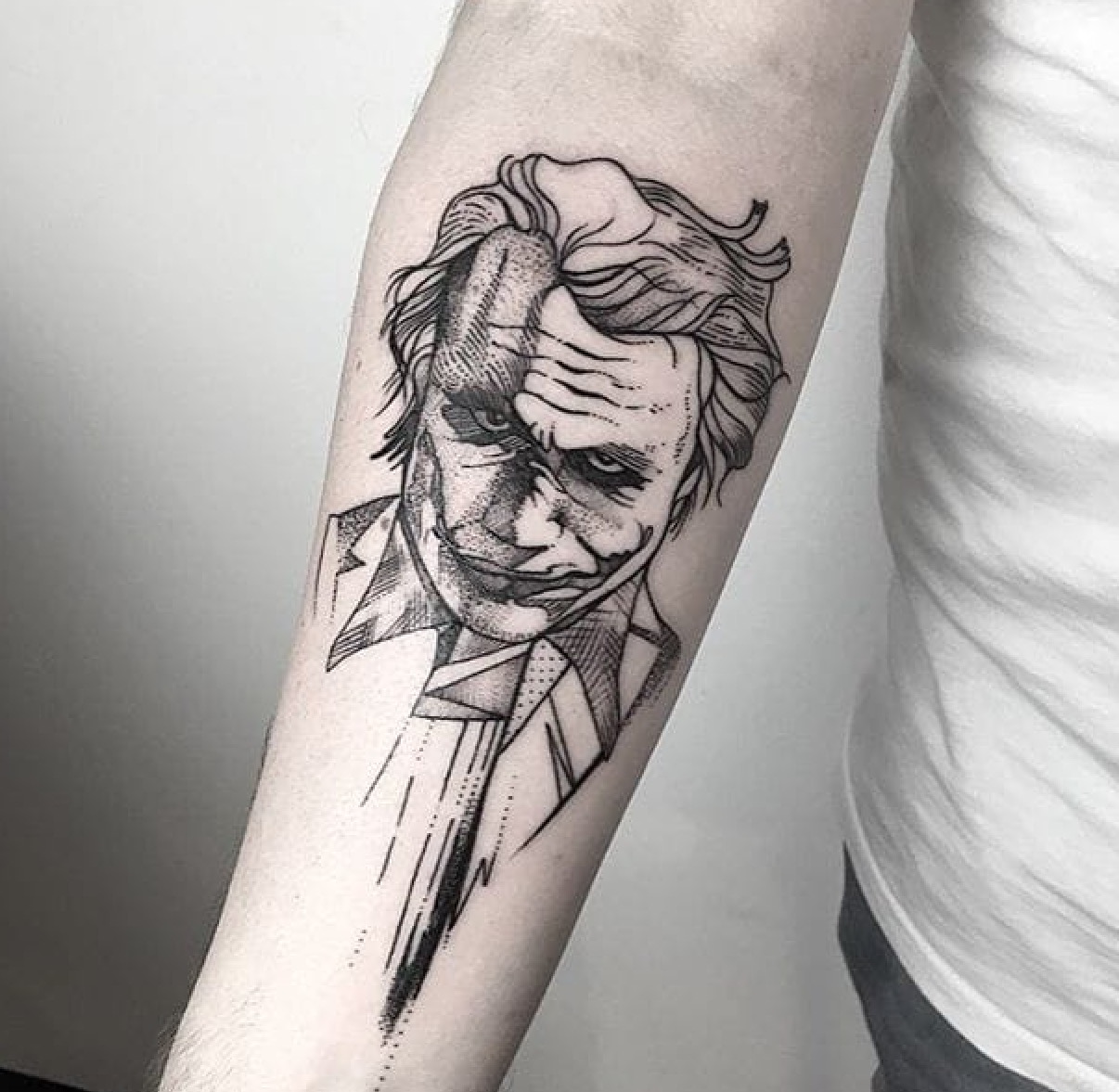 3. A comic-like tattoo design of the Joker. 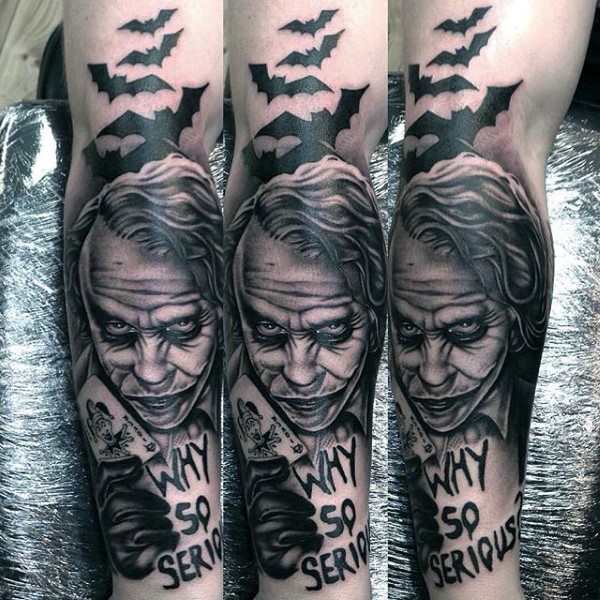 4. A cartoonish take on the Batman antagonist. 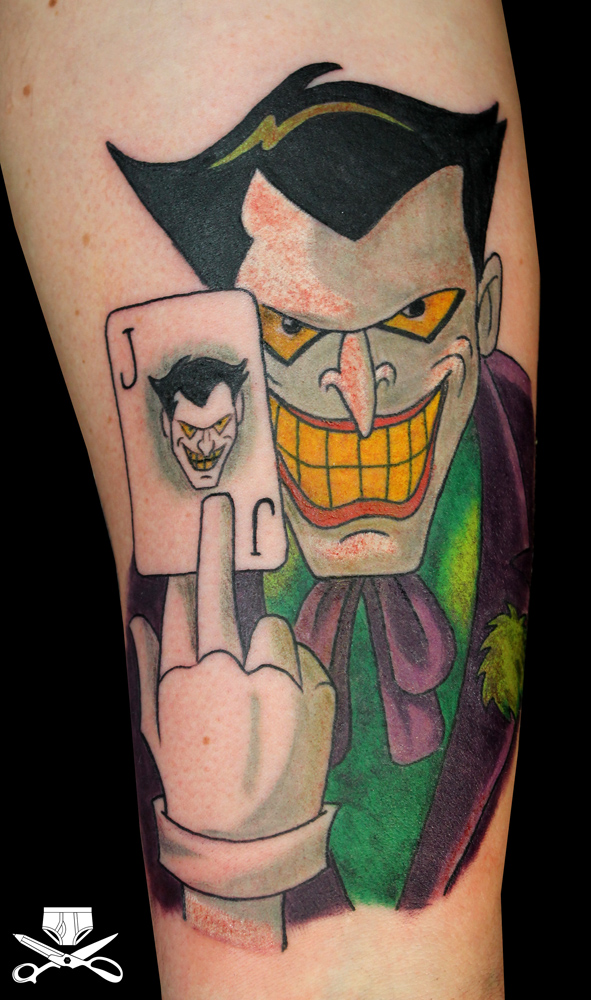 5. A watercolor tattoo of Heath Ledger as Joker. 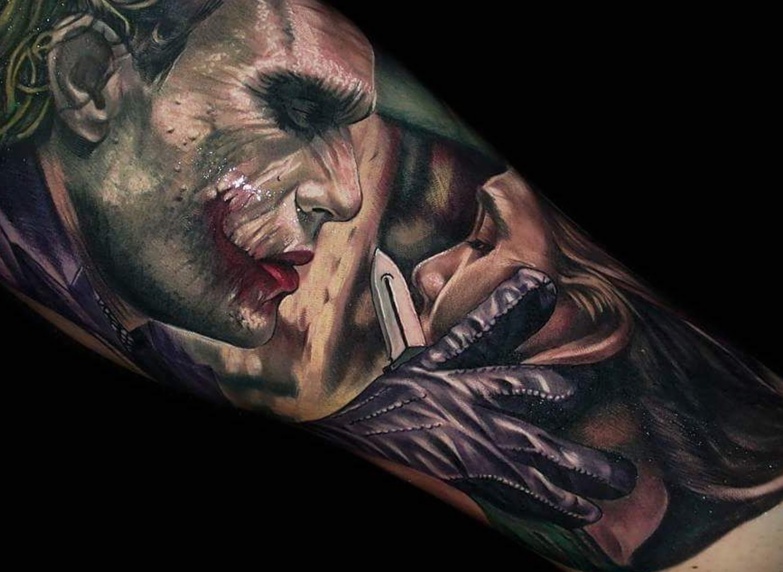 6. A creepy jester tattooed on the arm. 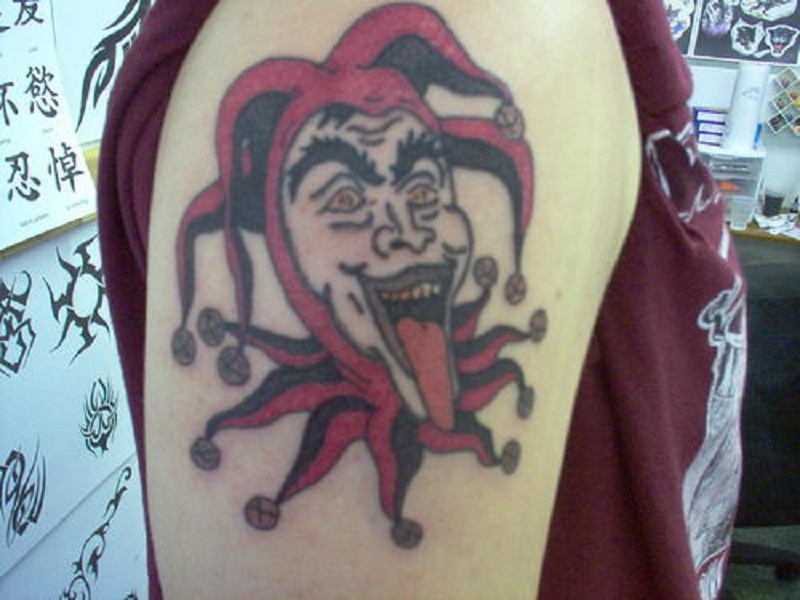 7. A dark noir-inspired tattoo of Joker. 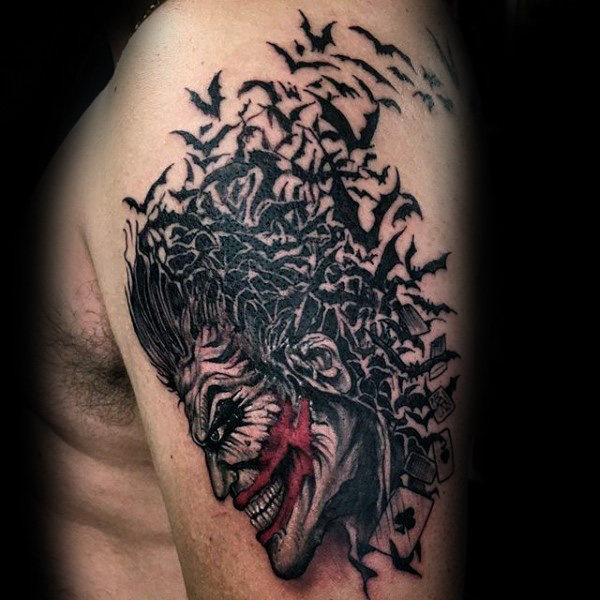 8. An arm tattoo of Joker with Harley Quinn. 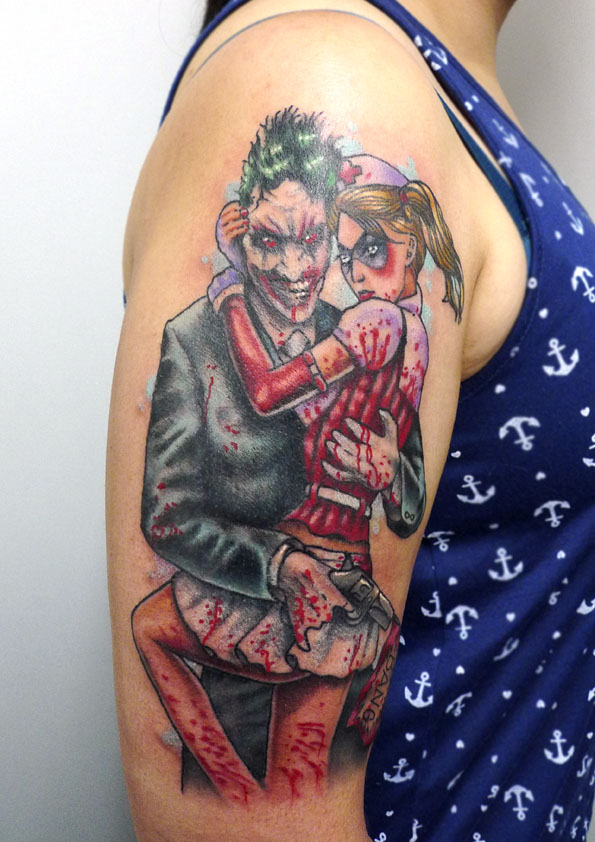 9. A realistic design of Joker as an arm tattoo. 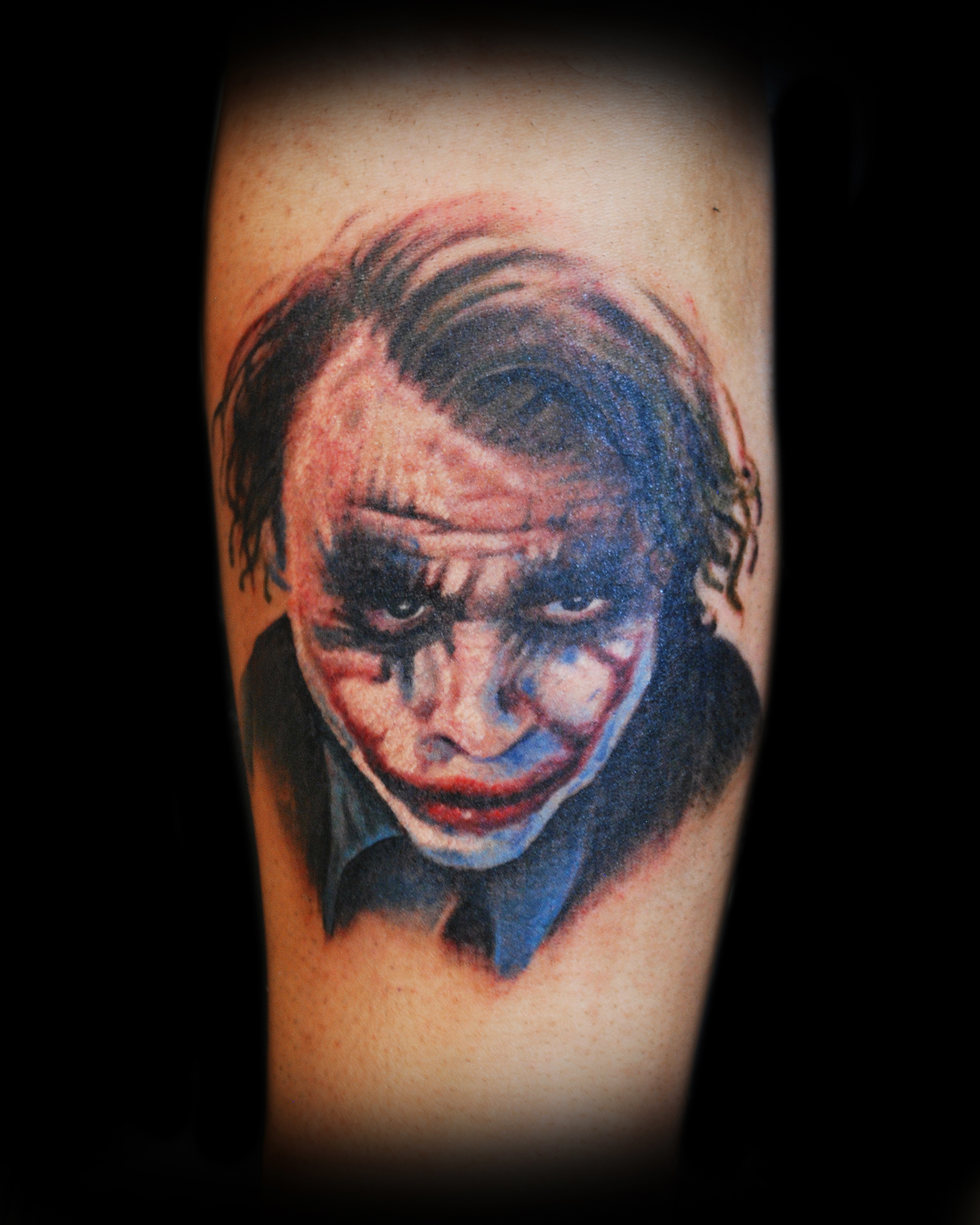 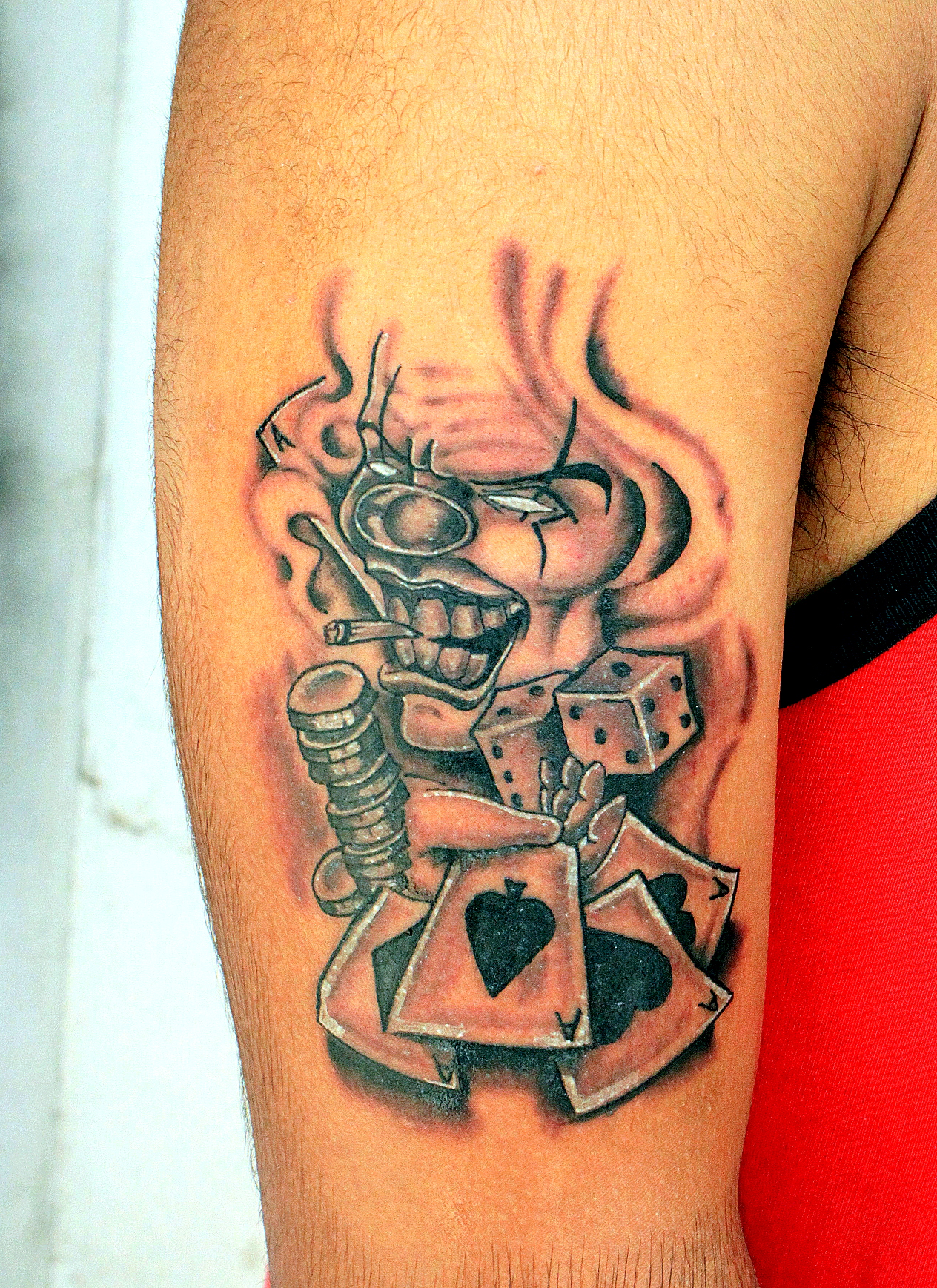 11. A shadowy-designed tattoo of Joker. 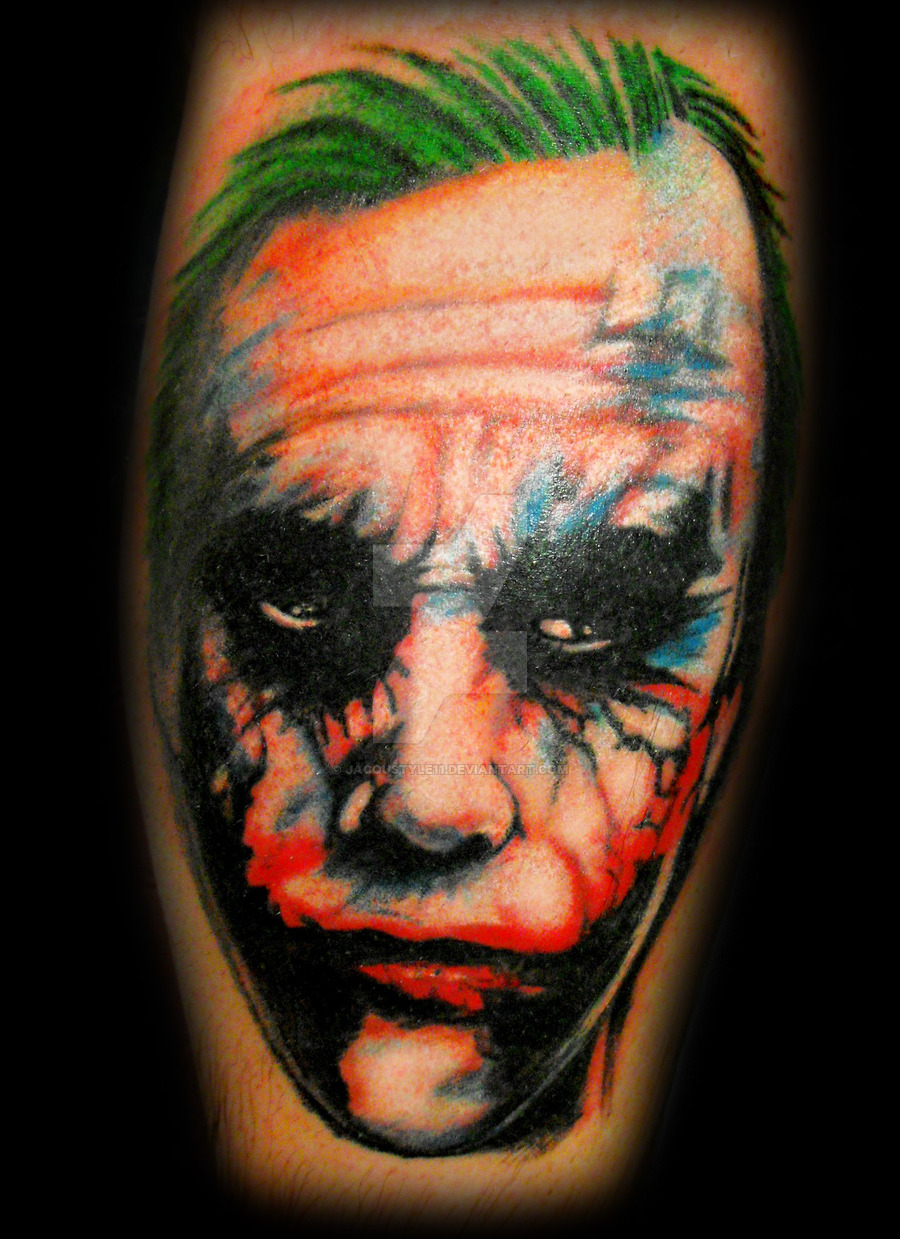 12. A large full-back tattoo of Joker. 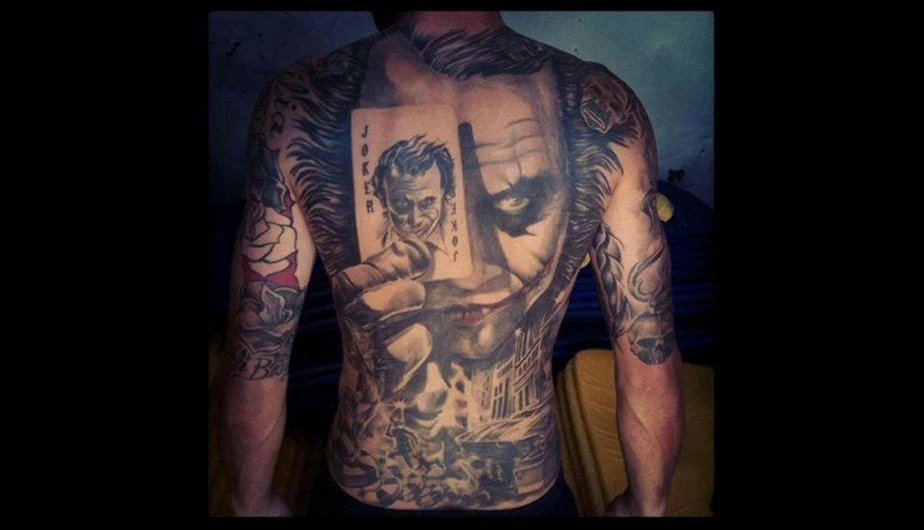 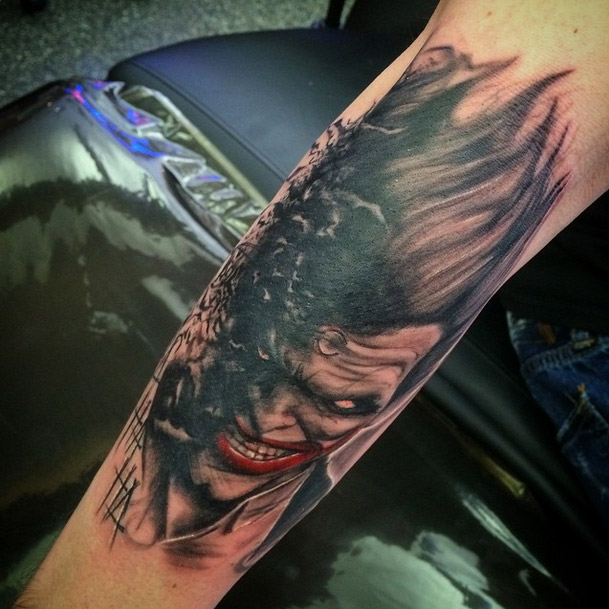 14. A leg tattoo of Joker with Gotham City as double exposure. 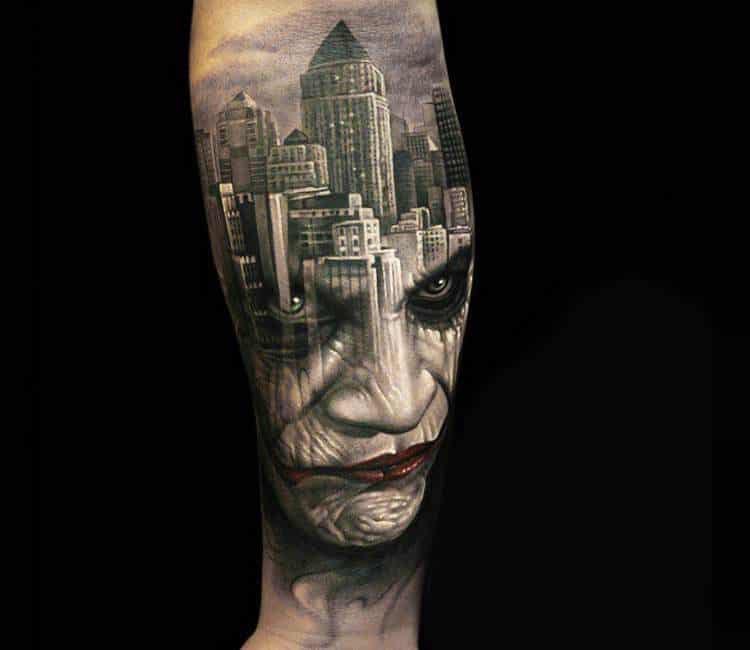 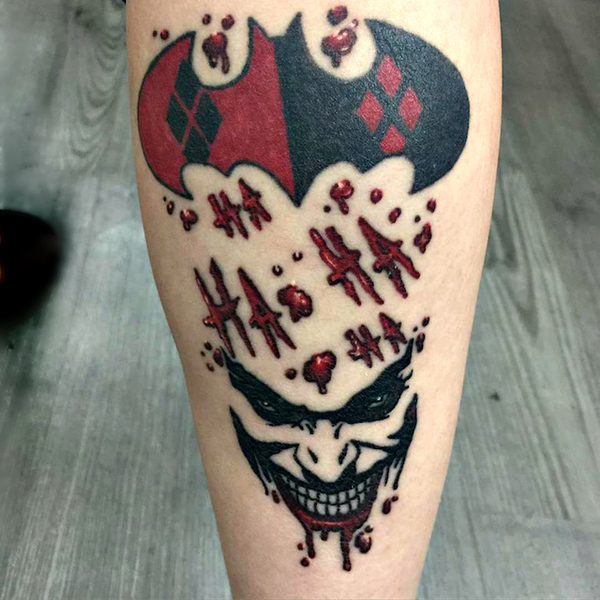 16. A tattoo of Joker with a scene of Gotham City. 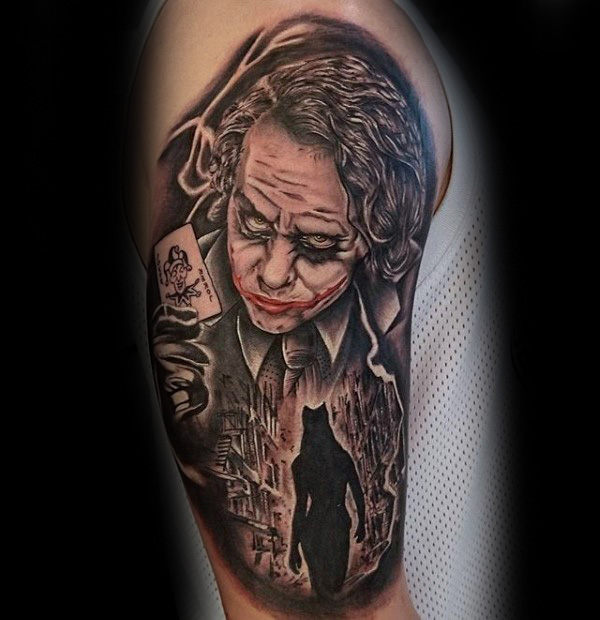 50+ Samoan Tattoos for those Looking for Some Cool tribal Designs

50+ Pretty Daisy tattoos for the Anthophiles

60+ Unique Ideas for Chinese Calligraphy Tattoos and their Meanings

[…] 2016 film adaptation of DC Comic’s antihero team “Suicide Squad”, characters like Joker and Harley Quinn from the said squad has exploded in popularity. Prior to the release of the film, […]