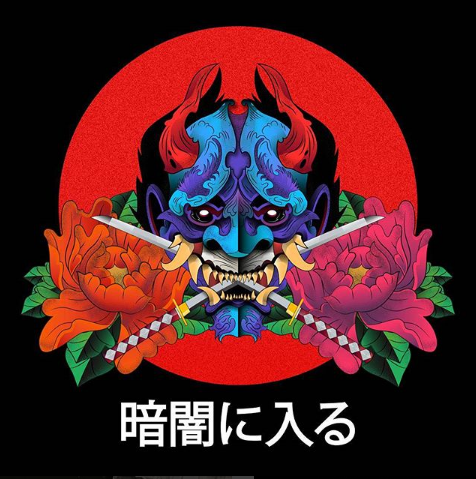 Tattoos nowadays are very popular and common. It is a form of art and self-expression among creative individuals. Anyone who is over the legal age can get Oni Mask tattoos. Getting one is a huge commitment though, so it is important to do your research and ask your tattoo artist the right questions to give you tattoo ideas and help you decide what design you are going to get.

If you have already decided on the design and it happens to be an Oni Mask tattoo design, then you are in luck, as today, we are going to discuss everything about the Oni Mask Tattoo.

A very intricate and colourful oni mask tattoo on the back of a subject. 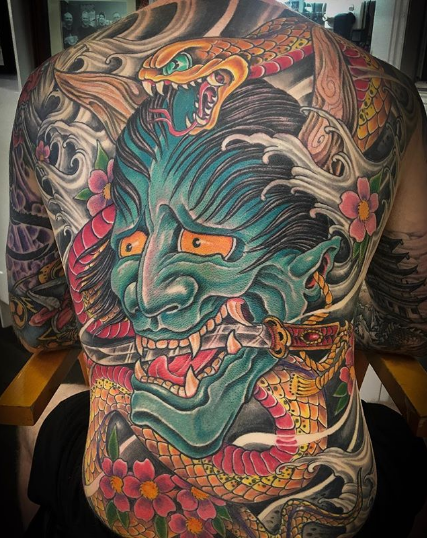 The word “Oni” in the Japanese language simply means “Demon” or “Devil”.  The Oni is very well-known when it comes to Japanese art, theatre, and literature. They come from the Japanese folklore and have been around for a couple of decades.

Oni masks are very popular in the Japanese tattoo scene. They are usually red or blue in colour but today, tattoo artists and enthusiasts tend to experiment with different colours.

Today, some of the more traditional Japanese people are still aloof when it comes to tattoos. Tattoos have had a bad name in the Japanese tradition, as these were used to identify the Yakuza, which are known as the Japanese mafia. Some businesses tend to ban customers with tattoos from coming into their establishments, although more and more people in Japan are slowly becoming open-minded and accustomed to this type of art.

The Meaning Behind the Oni Tattoo

Some people also believe that these creatures are cannibals. They are also believed to cause disasters, diseases, and other things that are unwanted and unpleasant. The Oni can also take on different forms and appearances to deceive and devour human beings.

A beautifully done blue oni mask tattoo on the arm of a tattoo enthusiast. 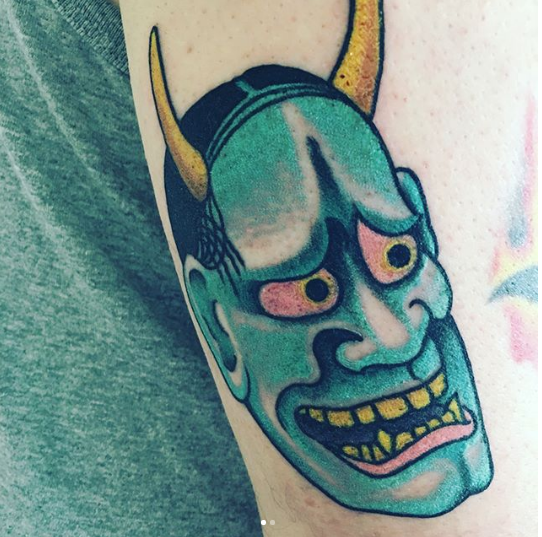 The Oni is usually portrayed as a hideous and gigantic ogre-like creature, which is why the word “Oni” also usually translates to a supernatural ogre or troll. Most Oni Mask tattoos have wild hair, fangs, huge and scary eyes, and two long horns growing from their heads.

Behind all of these meanings and contrary to popular belief, the Oni does not only portray evil. Most people have the Oni Mask tattooed on their skin as they are also known to protect, bring good health, and promote peace and protection from bad or evil spirits. There is even this old tale that tells of a monk that voluntarily starved himself to be able to turn into an Oni to protect his temple.

The Oni Mask Tattoo for Men

The Oni Mask tattoo has been and still is a popular tattoo choice for men. Most men see it as a sign of protection from evil spirits and since the Oni is known to have unbelievable strength, they tend to believe that they will acquire this strength if they have the Oni Mask tattooed on their bodies.

An oni mask tattoo done on the subject’s upper arm and shoulder. 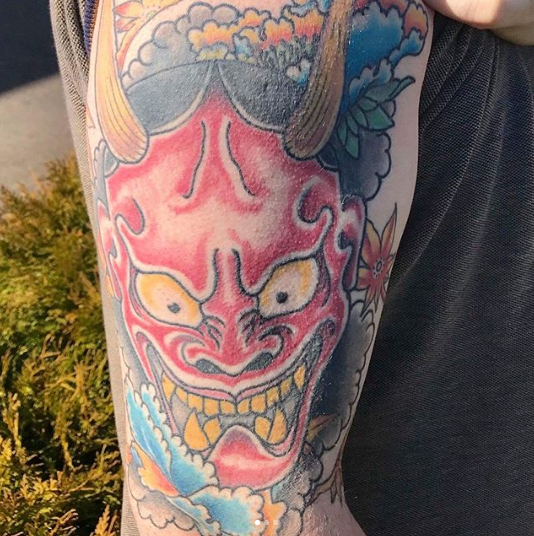 Horimonos usually take months or even years to complete and depending on both the artist and the client’s schedules, Horimonos are usually done in weekly sittings. Oni Mask tattoos and Horimonos tend to be expensive as they are usually large and colourful, so make sure to be prepared when it comes to your payment.

Most men also opt for this type of tattoo as it signifies one’s strength and dedication.

The Oni Mask Tattoo for Women

Although the Oni Mask tattoo is a more popular choice for men, some women still opt to have these tattooed permanently on their bodies.

There is another type of Oni, which is called a “Hannya”. In Japanese folklore, women who become overly jealous and angry are known to turn into a Hannya. This makes them extremely malevolent and violent and usually loses all sense of self, which then turns them into demons or Hannyas.

Hannyas are known to have sombre eyes, two horns on their heads, and a wide mouth. The mask usually looks terrifying and full of character, which is what makes it a popular choice for most women and even men. It is important to note that Hannya mask tattoos are totally different from Oni Mask tattoos. 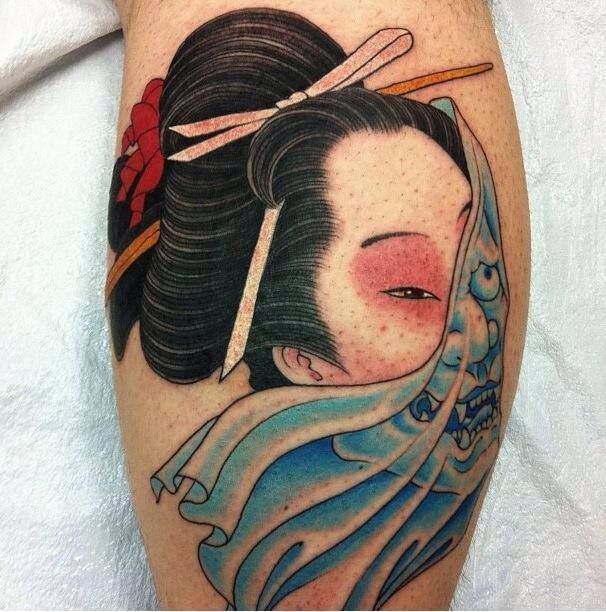 Since the Oni Mask tattoo is huge, these types of tattoos are usually done on huge parts of the body. Most men and women have these tattooed on their backs to properly show its colours and intricate design.

A colourful design of the oni mask tattood on the client’s arm. 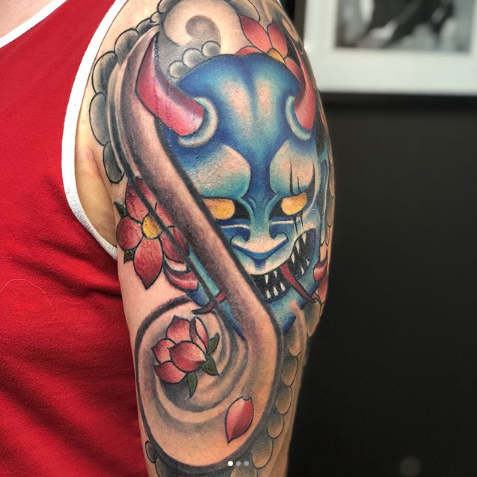 Another great placement for both men and women is the upper leg. This area can also accommodate a huge tattoo and is a good choice if you want to be quite discreet with your Oni Mask tattoo.

A beautiful black and grey oni mask tattoo on a male’s upper leg. 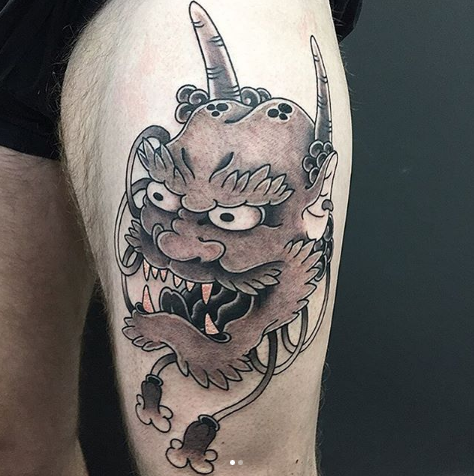 If you are bold enough, then you can get an Oni Mask tattoo on your chest. Note that this might sting more than the usual placements including the back and arms.

Some people with a smaller Oni Mask tattoo design opt for having theirs tattooed on their forearm, lower arm, and even their feet.

A smaller oni mask tattoo masterpiece done on the arm. 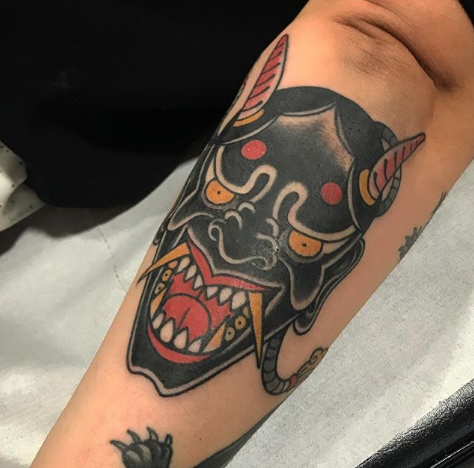 The placement of the tattoo will usually vary per design and personal preference.

We will be providing Oni Mask images, so be sure to watch out for that to get ideas for your own Oni Mask tattoo.

If you have any comments or suggestions, please do not hesitate to comment down below! We would love to know your thoughts and ideas on the Oni Mask tattoo!Oni masks are usually tattooed on the chest or back. 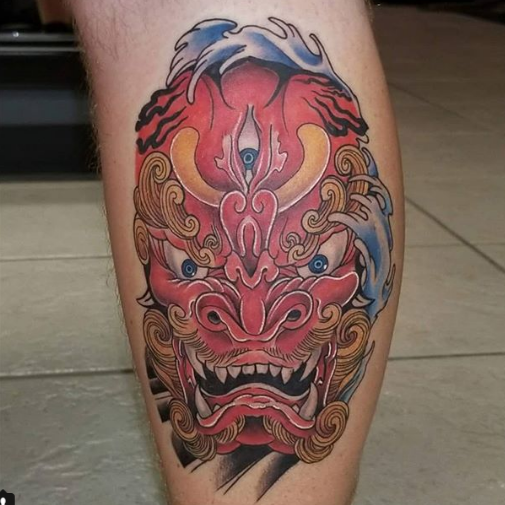 Oni mask tattoo on the upper arm of a male subject. 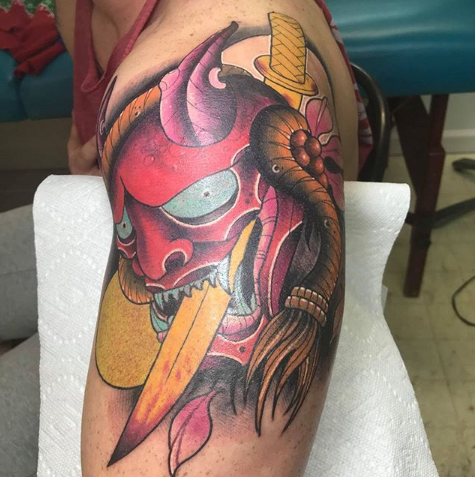 An amazingly done wrap around oni mask tattoo on the client’s arm. 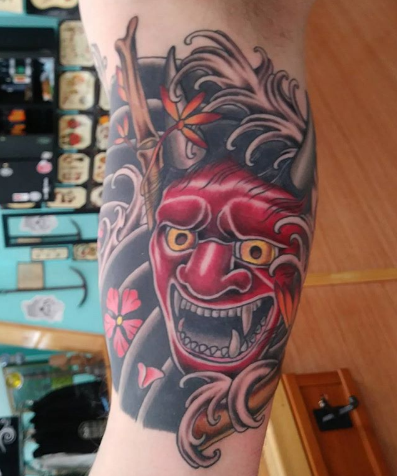 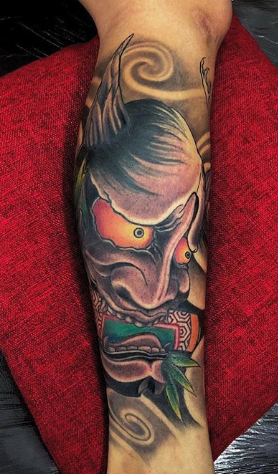 A red and Vibrant oni mask tattoo on the leg of the subject. 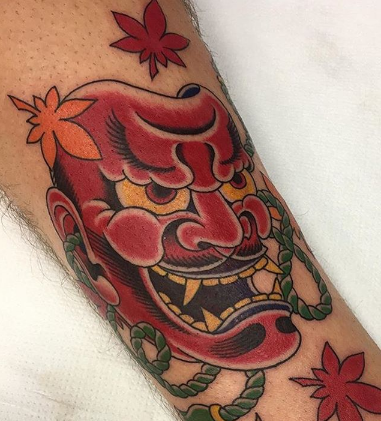 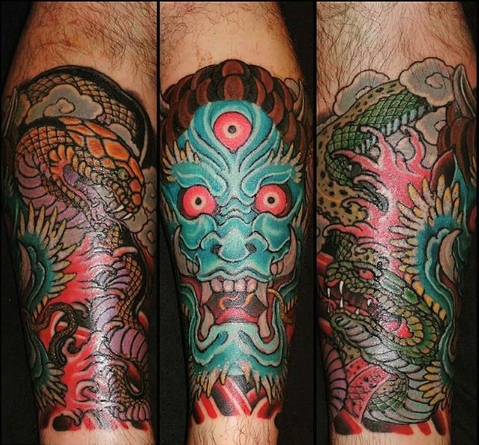 A Colourful full sleeve tattoo of an Oni Mask on a male client. 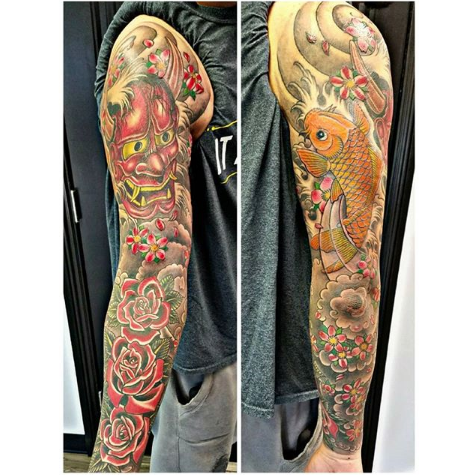 A very intricate black and grey oni mask tattoo on the client’s arm. 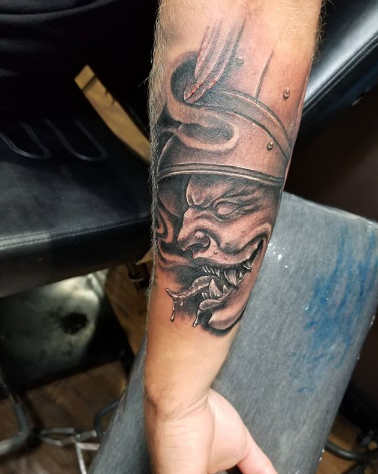 Red and black oni mask tattooo on the subject’s arm and shoulder. 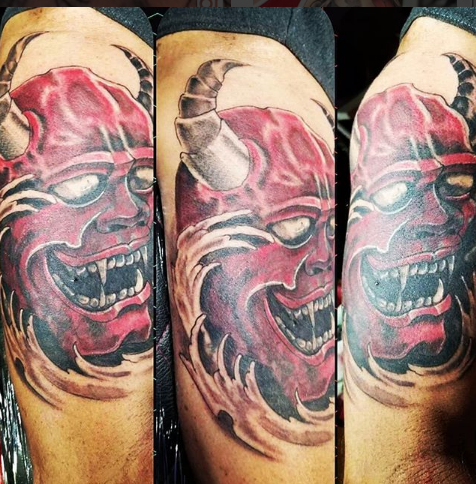 A unique and different type of oni mask tattoo on the subject’s hand. 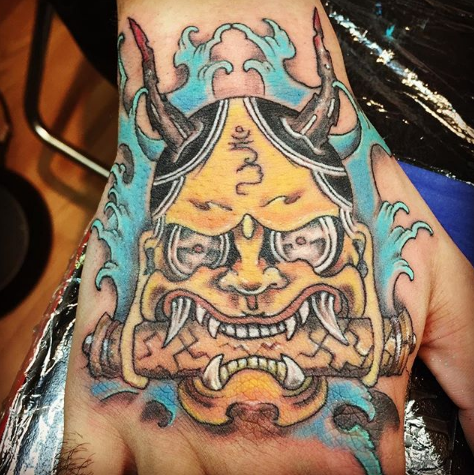 A kind of creepy black and grey oni mask tattoo. 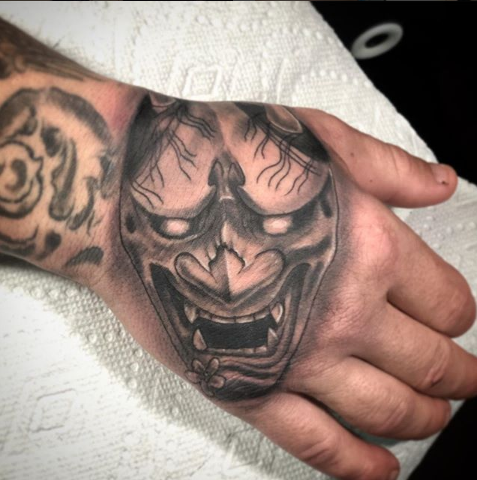 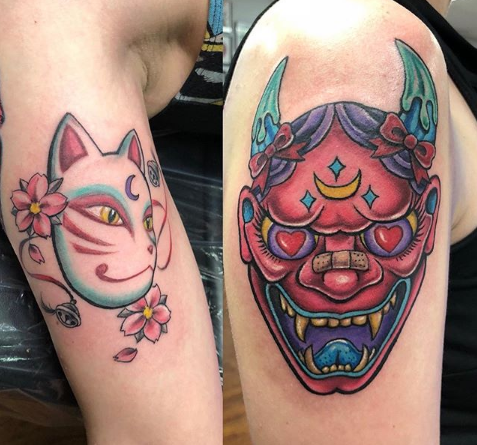 An amazing black and grey oni mask tattoo on the lower arm. 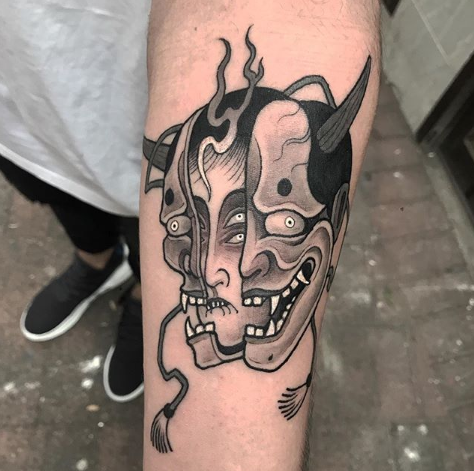 A very detailed and colourful version of the oni mask tattoo. 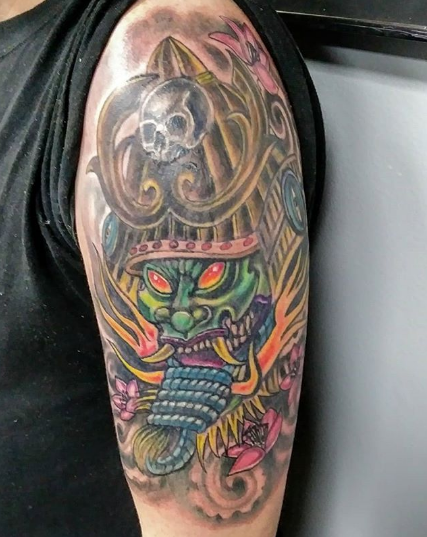 A simple and quite small but totally amazing oni mask tattoo on the hand. 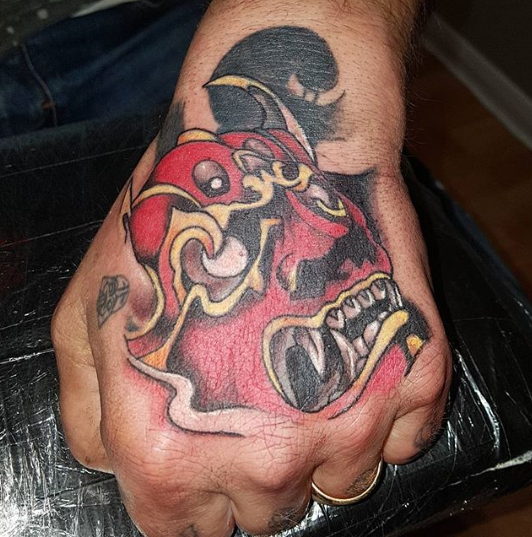 A black and grey back piece of the oni mask tattoo. 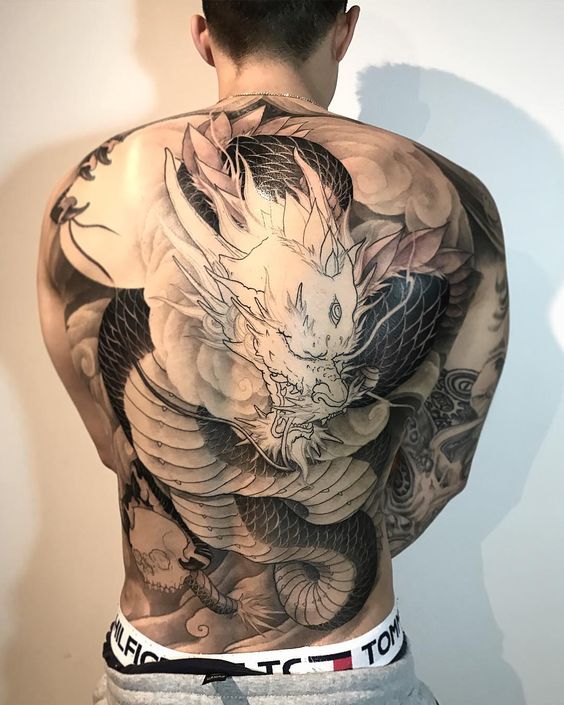 An amazing and pretty usual tattoo design of the oni mask tattoo. 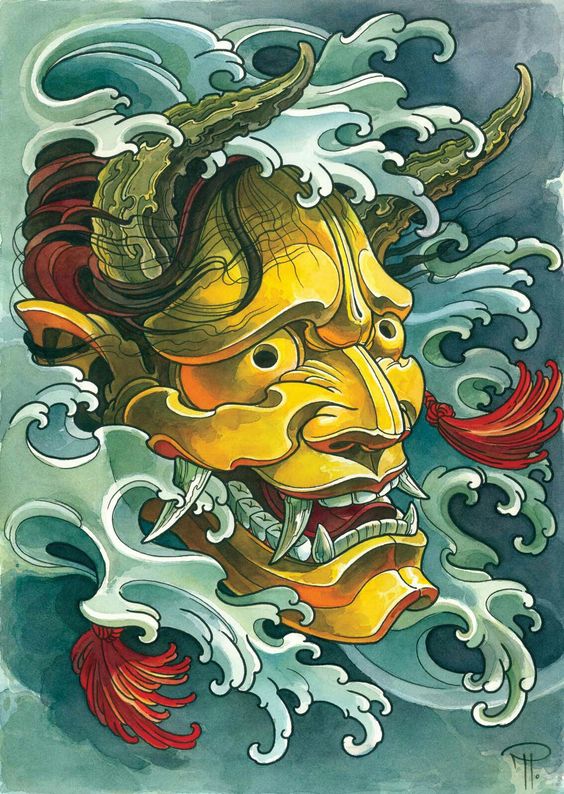 A simple but intricate back and grey oni mask tattoo on the arm. 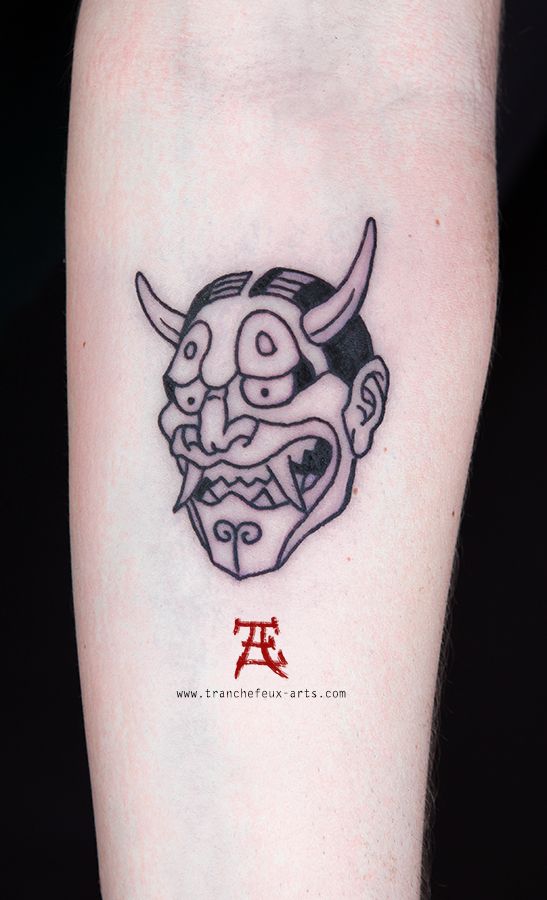 A unique and amazing oni mask tattoo drawn on a cat. 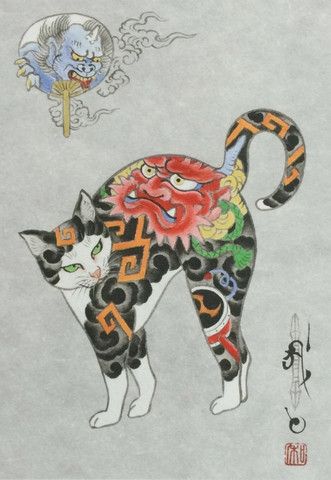 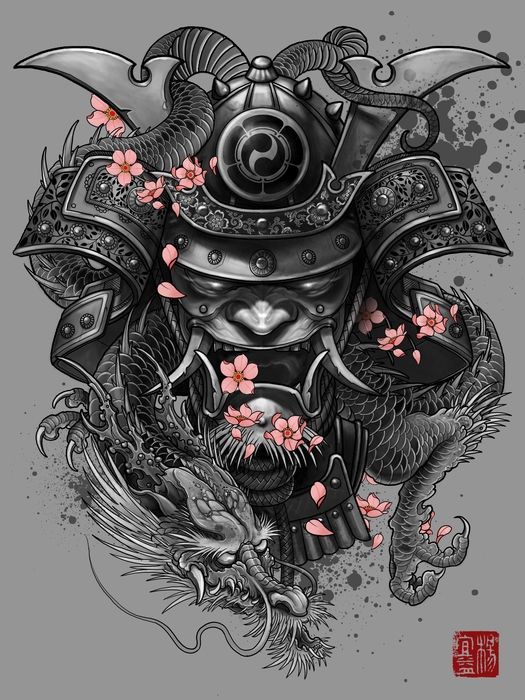 An amazingly done full back piece of the oni mask tattoo. 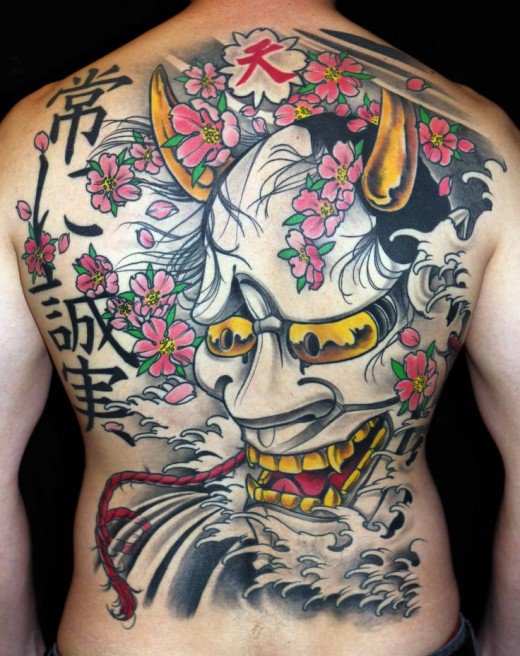 A huge oni mask tattoo done on the client’s whole back. 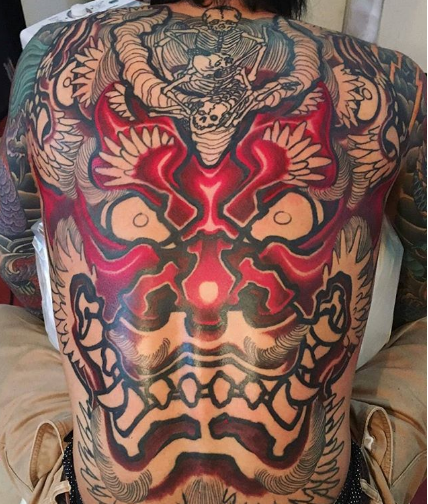 Tephanie has extensive knowledge when it comes to body and facial piercings. She has seen it all – from nostril piercings all the way to nipple piercings. She has over 10 piercings including a nostril, medusa, eyebrow, tragus, earlobe, and industrial. She is an expert when it comes to cleaning piercings and keeping it infection-free. If you have got any questions for Tephanie about any type of piercing, comment it down below and she will get back to you in a jiffy!